Bags packed with newly-bought loose-fitting abaya robes, comfortable shoes and non-fragranced toiletries, Sajidah Anwar was ready to perform Hajj pilgrimage in Saudi Arabia, the fifth pillar of Islam and a religious requirement for all Muslims who can afford to make the journey.

The other pillars include belief in God (Allah) and Muhammad as a prophet, five daily prayers, fasting and charity.

“I was prepared spiritually and mentally to complete the fifth and final requirement,” Anwar told Al Jazeera.

She had upped her physical training to make sure she was fit enough to make the arduous journey, attended Hajj courses and bought everything she needed for the trip.

The accomplished project director for a property and investment company in the British capital, London, has travelled the world.

Most recently she has spent time in Australia’s Blue Mountains and travelled across Tasmania, but the one place she has most wanted to visit had always been just out of reach.

“I’ve been saving for this trip for years but had been waiting for a mahram [male relative] to be able to accompany me as that’s the traditional requirement of performing Hajj or Umrah,” the 48-year-old said.

It was 2020 when mamoo, her maternal uncle, said he was ready to join her along with his wife to perform Hajj.

“Their kids were older, and they felt it was the right time for the couple to perform the pilgrimage,” Anwar said.

Pandemic-led travel curbs meant Saudi Arabia was only allowing Muslims already inside the country to make the pilgrimage.

Anwar and her family had to wait to travel to Mecca – like millions of Muslims worldwide – and prepared to do so once restrictions were lifted.

In 2019, 2.5 million Muslims made the journey for Hajj before the coronavirus pandemic hit.

That year, the income from both Hajj and Umrah – a shorter version of Hajj that can be completed at any time of year and is not compulsory – brought in about $12bn to Saudi Arabia’s economy. 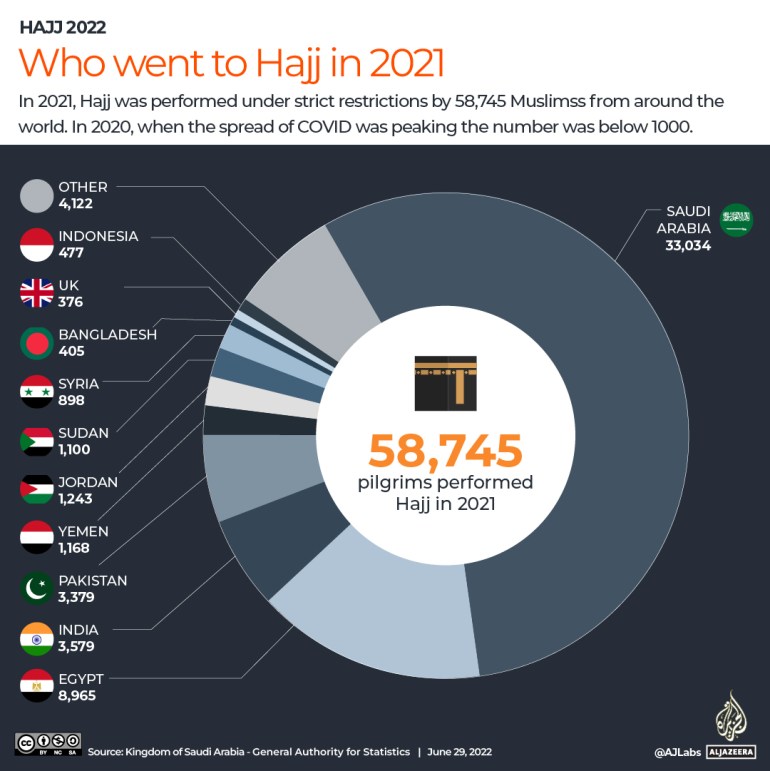 This April, Saudi Arabia announced that it would once again be permitting Muslims from abroad to enter, meaning Hajj was back on for those who had deferred.

“Our agent is an old family friend, and he contacted mamoo as soon as the Hajj announcement was made after Eid [in early May]. We confirmed to him we wanted to go, promptly paid our deposits [1,000 pounds or $1,200 each] and waited for him to confirm the arrangements,” Anwar said.

The family began to busy themselves making sure paperwork and coronavirus vaccines were up to date and booking annual leave.

By June 6, just a month before Hajj is to commence (July 7), Saudi Arabia’s Ministry of Hajj cut out the middleman.

Travel agents from Europe, North America and Australia – who had previously been instrumental in creating packages to suit travellers’ needs – were no longer permitted to facilitate the pilgrimage.

Applicants would then be entered into a draw and informed whether they were among the chosen few able to make the journey to the Muslim holy land.

Assalamu Alaikum.
Our online process is really easy, simple, and fast. We handle all the logistics from flights to accommodations to visas everything is covered for your Hajj this year.

Feel free to contact us for further inquiries.
Motawif Team

Anwar’s agent returned their deposit in full as soon as they learned of the online portal, on June 10.

“We then scrambled to complete the online forms before the 13th June deadline,” she said.

Others were less fortunate with some would-be pilgrims still chasing agents to return fees.

“We needed our agent to return our payments so that we could apply through the online portal,” a distressed Samira Hassan, whose name is changed as she spoke on condition of anonymity, told Al Jazeera from her home in New Jersey, United States.

Hassan had signed up with a Hajj tour group led by her local imam and was hoping to go with her twin sister, elder brother and parents.

Their agent had originally advertised the price of $13,600 each after they applied to make the pilgrimage in April. A month later, he informed them that the price increased to $21,000.

“My father had to drop out as he couldn’t afford it, he’s a meeting attendant at a hotel. My sister and I helped towards the costs of my mother’s trip,” Hassan said.

“We were still willing to go, until we were told at the very last minute that the agent didn’t actually have permission to be taking any of us for Hajj and that we’d also have to use the portal.”

Hassan and her family then applied online.

“It has been stressful. The registration was announced suddenly, and there were glitches in the system,” the 25-year-old designer said.

“First, it crashed due to high traffic within a few minutes. There were also other glitches such as inability to add [coronavirus] vaccine dates before July 2021. So we submitted our photo documents and added random dates,” Hassan said.

Anwar, who has an IT background, said: “The [Saudi] authorities have the stats, they know how many pilgrims are likely to be applying from the countries they introduced this portal to. It feels like there was no user testing before launching it, no due diligence.”

Pilgrims wanting to travel all told the same story – their application had been approved, but payment was pending; their selected travel dates changed and then prices doubled; no visas were issued nor flights booked, all just days before Hajj begins.

“The Mowatif packages were different to what was being offered by our agent – we had planned to go for 14 days this package wasn’t available,” said Anwar. “We could either go for 12 days with no visit to Medina, or 21 days with first flights leaving on the 25th which would mean requesting more leave.”

Adeeba Qureshi had applied for the gold package at 6,900 pounds ($8,300) per person, grateful that she and her husband Mohammed would be saving some money as an agent she had spoken to before the application changes had been announced had quoted 8,000 pounds ($9,700).

“I was so happy. I think the Saudis are introducing this to try and help us and make everything really smooth and easy and more affordable,” Qureshi told Al Jazeera just after she learned she had been selected for the draw.

But days later, Qureshi discovered the dates she had selected and carefully planned childcare around were no longer available, and the price had doubled.

It was the same for Anwar, who said: “It feels like a commercial decision, they haven’t made much money from Hajj for two years because of the pandemic, but instead of behaving like the custodians of the holy city, they’re behaving like a company, but with total disregard for pilgrims.”

But Qureshi still wanted to go.

“I have three children: a nine-year-old, a five-year-old and a three-year-old. My sister had agreed to look after them while my husband and I were away. I was planning to make a timetable detailing their schedule to help her,” she said.

“Psychologically, I’m prepared to go now, but the uncertainty has been devastating. I’m ready. I’m 31 years old, I don’t want to do it when older.”

Qureshi’s concern is validated after discovering a change in criteria, those above 65 years are no longer permitted to go for Hajj, meaning Qureshi’s mother can no longer make a journey she has saved a lifetime for.

“My mother, who is now 67, spent her entire life dedicated in raising me and my sister, she worked hard to raise us and give us a good education, working in accounts in a government department in Hyderabad, India,” said Qureshi from her home in Hayes, west London, with the distress in her voice palpable.

After seeing both her daughters get married, Qureshi’s mother, Sayeeda Begum, felt she had fulfilled her duties and having put money aside, was hopeful of making Hajj this year.

“She had waited her whole life, like so many do, only to now find out she can’t go,” Qureshi said.

Days later, “heartbroken and frustrated”, Hassan told Al Jazeera: “Our flight was supposed to be less than a week away and there are still too many technical issues for all of the pilgrims … We have decided to postpone our Hajj until next year.”

“We hope that next year we can have travel agents back since it was much easier to communicate with them and we have never experienced difficulties like this before when we have been for Umrah,” she said.

A petition calling for a return to traditional ways of booking the pilgrimage reached its target within days of launching.

“I had 48 people booked this year, but when the bookings moved to Mowatif, the pilgrims faced lots of problems, each one ended up cancelling their Hajj for this year,” he said.

“The changes made this year have affected my business, but as they say as one door closes, another opens.”

Shah’s agency also specialises in trips to Jerusalem’s Al-Aqsa Mosque and to religious sites in Iraq.

“If the Saudis insist on keeping Mowatif for next year’s Hajj, that’s fine, but they should also allow agents to run in parallel, at least there is competition, and the Hajjis have a choice,” Shah said.

Though Saudi Arabia’s Ministry of Hajj and Umrah has not responded to Al Jazeera’s request for comment, on June 21 the Motawif site issued an update, confirming it was aware of problems related to payment completion and booking confirmations.

The statement said the Motawif team was working through outstanding cases and aimed to contact applicants within 72 hours.

“We have no reassurances that once we get there that we’ll actually have a good experience,” said Anwar, who was forced to make the distressful decision to postpone her pilgrimage.

Some pilgrims who had successively made bookings through Mowatif arrived at the departure airport and were told there was no flight.

Another morning spent on the phone to
Saudi Airlines to check if @Motawif_SA have booked us on a flight.

And still Motawif have not organised and issued another eticket for us. Are they waiting till the plane is overbooked again!?

Others who made it to Saudi Arabia found they had no hotel rooms or were given rooms with strangers rather than family members.

“The Hajj Ministry has put people through so much stress this year,” said Anwar.

“During this time [of] rising cost of living, you don’t put this money into a trip of a lifetime lightly. You do it because this is a duty, it’s a spiritual journey back to the roots of Islam,” she said.

“We grow up hearing the stories of the prophets set in these lands. I was looking forward to being there, it’s an opportunity that I can’t comprehend.”