The scaly mounds began appearing on her scalp at some point after Cyclone Batsirai slammed into the southeastern coast of Madagascar on February 5, unleashing the most powerful storm the island nation had seen in years.

Since the storm hit, 35-year-old Menja, his three children, and his wife – like thousands of others who live in and around the coastal city of Mananjary – have been without a home. In all, at least 46,000 residences have been destroyed or damaged across the island during this cyclone season.

Two weeks after Batsirai, Cyclone Emnati hit the region, worsening their situation. The family has been living in a UNICEF-provided tent in a lot near the beach. Menja scrounges daily for work and food. People living in the tent say they average one meal a day.

“Before, we had foreigners who were taking care of us – sisters,” Menja said from the makeshift encampment, referring to a Catholic aid group. “But once they left everyone has found themselves alone.”

He puts his hand on his daughter’s shoulders and looks at the pools of water stagnating across the floor of the shelter.

The inhabitants say about 200 people crowd at night into the tent, which regularly floods when it rains. Some have used mats and debris to elevate their sleeping places.

“Look at the flies that we are [experiencing] every day,” said Menja, who worked as a house guard before Batsirai. “This is our daily life. There will be diseases.”

At least 121 people were killed and more than 100,000 others displaced by Batsirai. Overall, the aid community says there have been a total of 205 fatalities and 172,000 people displaced by the five major storms to hit Madagascar since the beginning of 2022.

Aid agencies like the United Nations Children’s Fund (UNICEF) have been scrambling to provide water purification kits, with the threat of waterborne diseases looming. Other humanitarian groups and the government provide some food assistance and cash disbursement. Still, residents say they feel left behind.

As of March, at least 470,000 people remain in need of urgent food assistance in three regions along the country’s southeastern coast, according to the World Food Programme (WFP).

At least 73 health centres were damaged this cyclone season.

At the district hospital in Mananjary, a sprawling complex whose radiology, maternity, paediatric and other wards had provided specialised medical care to the wider region, health workers have seen a spike in malaria, typhoid, respiratory infections and diarrhoea in the wake of the storms.

The facility has been rendered largely unusable since Batsirai’s winds – which peaked at over 200km/h – tore off its roof. Rainwater falls onto empty hospital beds in a paediatric ward with walls plastered with children’s cartoons. Equipment that may still be salvageable is stacked in a store room.

“To sum it up, we have not heard about a rehabilitation programme here yet,” said Dr Gerard Jaonarivelo, who is on staff at the hospital. “That is the situation.”

Outside, aid workers in tents administer the only healthcare available on site.

On a day in mid-March, three men and a woman stumble into the compound carrying an unconscious man. They disappear into a tent for Doctors Without Borders (Medecins Sans Frontieres, or MSF), which only has the capacity for consultations, but must refer or evacuate serious cases elsewhere.

Next door, 28-year-old Meralda grimaces in labour in a makeshift maternity ward run by the United Nations Population Fund.

In recent years, Madagascar has become a central topic in global discussions on climate change.

It is often highlighted as a severe instance of climate injustice, with its meagre carbon footprint dwarfed by the fallout of climate change-fuelled extreme weather. The island regularly makes the top 10 list of most disaster-prone countries in the world.

In 2021, WFP officials made international headlines for saying a food insecurity crisis in the country’s arid south could become the world’s first “climate change famine”. Longtime aid workers in the region and rights observers are quick to point out that an array of local factors – including years of regional neglect and underdevelopment – have contributed to the ongoing crisis there. 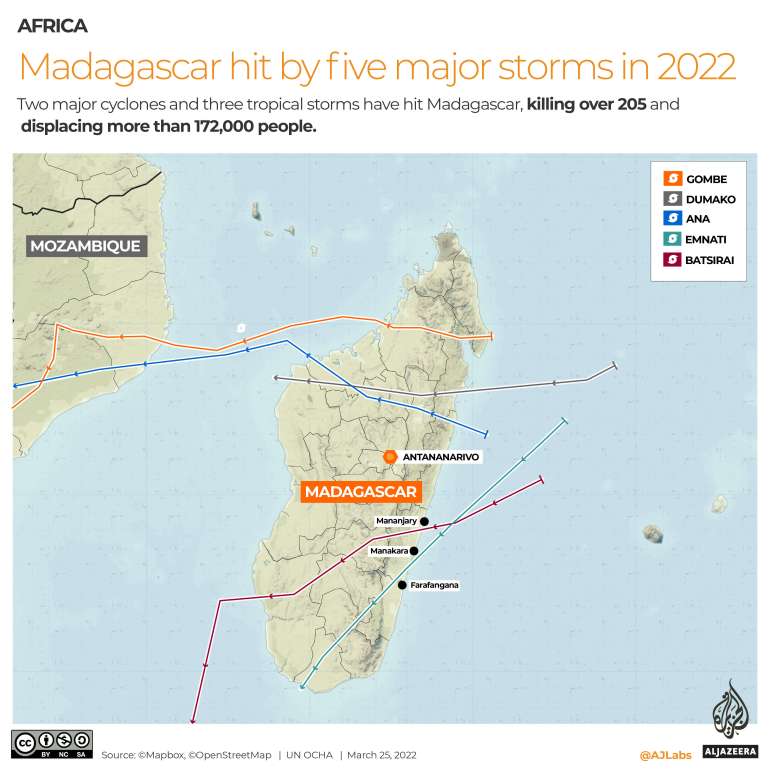 On the flip side of the crisis in the south, climate experts say evidence suggests that the intensity of the storms that slam the greener coasts of eastern Madagascar – which abuts the Indian Ocean – have increased in severity amid rising temperatures. Worse still, the UN’s Intergovernmental Panel on Climate Change projects cyclone wind speeds and precipitation to increase in the years ahead.

Local deforestation is also believed to contribute to the ravages of the cyclone season, which runs from November to March.

About 164km south of Mananjary, in a fishing district in the bustling city of Manakara, district chief Velomanana Jean Baptiste Florent laments that the water has been filled with net-clogging algae since floodwaters submerged the area. The fishing yields are light.

More than 400 of the 1,400 residents of the district have not been able to return since the storms, he said. Dozens of homes – built on stilts to withstand regular floods – remain destroyed since Batsirai, which he described as undoubtedly the most powerful storm residents had experienced since he assumed his role in 2009, and also the most destructive storm that he can recall.

“That was stronger than ever,” he said, surveying the wreckage of what had been a church. “The hardest situation is that once the cyclones are gone, this is what people found – damages.”

“People can’t repair their houses, because rebuilding their houses depends on the means of earning money,” he observed.

It’s a dilemma that reverberates across the country. More than two-thirds of the fast-growing population of 30 million live in poverty. After years of economic woes fuelled by political crisis and corruption, signs of nascent progress were undermined by the coronavirus pandemic.

Strict COVID-19 restrictions saw travel between Madagascar’s regions decline. Only at the end of last year did the island – the fourth largest in the world – slowly begin to reopen itself to outside travellers as hopes of an economic rebound began to rise. Then the storms hit.

“We are trying to rebuild again, praying to God that change will come,” Florent added. “But people right now are living in total suffering, in deep suffering.”

In Antsaka, a town surrounded by hills near Manakara, Nirina and her brother-in-law Bernamo watch as a group of men construct a temporary UNICEF classroom on the footprints of a schoolhouse destroyed by Batsirai. At least 2,500 school rooms were destroyed in the recent storms, disrupting education for more than 133,000 students.

Nirina’s children haven’t been to school in weeks, but they can hardly prioritise it because “there is nothing to eat”, said Bernamo.

The family lives in a small settlement in the hills, a 45-minute walk from the national road along steep paths overlooking terraced rice paddies.

The cash crops they grow in the forest – cloves, lychee, breadfruit, vanilla – were almost completely destroyed in the winds and rains, depriving the family of as much as 4,000,000 ariary ($1,000) they would normally rely on to get through the year. The loss of the lucrative clove harvest was particularly devastating.

At least 60,000 hectares of rice paddies were also flooded across the storm-hit regions, with the WFP estimating that up to 90 percent of crops were destroyed in some areas ahead of the upcoming harvest in May.

“There are no crops right now, rice or other things,” Bernamo said.

The family has taken to foraging a starchy root known locally as tavolo and elsewhere as Polynesian arrowroot. They crush the plant’s bulbous tuber and strain its chalky liquid through a cloth, repeating the process three times before cooking down the liquid to weaken its bitter taste.

“This is our only food,” he said. “Once it is finished, we won’t have anything to eat.”

Weeks into the recovery efforts, aid workers say access to some areas continues to be a challenge due to destroyed infrastructure.

Farther down south – near the commune of Vohitrindry – 11-year-old Arlyn ferries people three at a time across a waterway in his father’s plastic patched canoe. He periodically stops to bail water from the vessel.

The money he earns – 200 ariary (5 cents) per passenger – goes to his mother to offset the financial toll of their lost crops.

“I do it because people are afraid to cross the bridge and I make some money,” he said.

Above him, residents of the area bravely walk foot-over-foot on skinny metal beams high above the water. An older woman grabs the shirt of the young man in front of her as she begins the traverse. Two men and a woman take their first precarious steps before deciding to pay for the water passage below.

Soon, two trucks appear on the opposite side of the bridge and a group of men begins a nerve-wracking operation. They lay planks in a line in front of one front tyre – constructing a makeshift pathway – while the other front tyre balances on the width of the bridge’s thin girder. The vehicle inches forward for over an hour before reaching the other side.

The driver, 49-year-old Guillaume, said the bridge connects the only roadway to a group of districts beyond. He and his brother, Yvan, make the razor-edge crossing twice a day – carrying rice and other supplies to sell to the local shops there.

“There is nothing to eat there if we don’t go,” Guillaume said. “There are no supplies there.”

Another 60km south, in the town of Farafangana, the capital of the Atsimo-Atsinanana region, 34-year-old Bao Angeline, a single mother, and her four children sleep at the local public house – an auditorium in the centre of the city’s market.

She washes clothes for a living and tries to find jobs during the day to save the money she needs for planks of wood to rebuild her home. “During Batsirai, my house wasn’t too damaged,” she said. “But during Emnati, it was completely destroyed.”

Unlike the more northern cities, Farafangana, home to some 43,000, escaped major damage during Batsirai, but found itself in the direct path of Enmati, which hit Madagascar on February 22. Residents say that government aid has been lacking after the most recent storm.

About 135 families – roughly 400 people – crowd into the public house at night, according to a local UNICEF representative.

Standing next to the skeletal frame of what she hopes will become her new house, Angeline considers the arithmetic of rebuilding. It will cost a total of about 500,000 ariary ($125), each piece of wood costing about 3,000 ariary (75 cents).

“I have to wait for finding money to rebuild this house,” she said. “I am not rich at all.”