Cape Town, South Africa – Wine glasses clink and friends share laughs as the sunshine beats down onto the back yard of No 52, Kwa Sec, on a Sunday afternoon.

As the hubbub dies down, McCoy Mrubata plays a smooth solo on saxophone before the double bass and drums kick in a few bars later. A wave of applause follows and before long, people in the front row are up and dancing.

This is Jazz In The Native Yards (JiNY), a regular concert that sees some of South Africa’s best musicians take the stage in Gugulethu, one of Cape Town’s largest townships. Following a strict COVID-19 lockdown in South Africa’s winter months of June and July, the jazz event is restarting on Sunday with local singer-songwriter Tankiso Mamabolo.

Mrubata, meanwhile, had made the journey down from Johannesburg to play in his home city in May. He grew up in Langa, Cape Town’s oldest township, just six kilometres (four miles) northwest of Gugulethu.

Some of the country’s top jazz musicians grew up in these areas, but until JiNY came along, the music was not hugely accessible for people living here. Now, young local musicians are reclaiming the space and inserting themselves into Cape Town’s musical narrative which, for decades, has been tailored to the upper and middle classes.

During the years of apartheid, the system of oppression that racially segregated white and non-white South African citizens, Black people were forced to relocate to the fringes of the city, to new settlements that would become townships.

Back in the 1960s, impromptu jazz sessions took place on the weekends in these communities, often in people’s front rooms and backyards. But playing under an apartheid regime was challenging, and many South Africans could not get into Cape Town music venues if they were not white.

“The musicians at the time were big victims to the police. Police raiding them at night, picking them up and locking them up because they happened to be in town after 9pm,” said Majaja Mdingi, 73, a longtime veteran of the scene who has been attending live jazz performances for more than 50 years.

Being born in 1973, Gloria Bosman, a jazz and soul singer from Mofolo, Johannesburg, was only three years old during the Soweto uprising, a turning point for the anti-apartheid struggle. But she knew how hard it was for Black musicians through her father, Fox, who played in the underground jazz scene in Sophiatown, a suburb of Johannesburg, in the 1960s.

“My family told stories of how hard it was to get into venues, even to use venues for music, especially jazz,” said Bosman, who has played at JiNY twice, including last month. “It mostly was underground because most of musicians that were in the forefront were in exile around that time. So you couldn’t even get a lot of people out there creating performance spaces because people with the financial muscle to do it were in exile.”

The Ngcukana brothers from Gugulethu and the legendary Abdullah Ibrahim were among the musicians who regularly played in Cape Town’s townships. These artists spoke to the struggle, and although their music resonated with the oppressed, it was often censored by the state.

Those who went into exile often feared for their safety and wanted to bring South African music to international audiences. Singers such as Thandi Klaasen and Dolly Rathebe remained in South Africa, though other greats like Ibrahim, Letta Mbulu, Hugh Masekela and Miriam Makeba went overseas.

When apartheid ended in the mid-1990s, many of the best jazz concerts moved out from the townships and into the city centres. But with the economic legacy of apartheid remaining, many Black South Africans were left poor and on the margins. Jazz concerts became less accessible for these communities, especially in Cape Town, due to transport and gig tickets not being affordable.

In 2013, Luvuyo Kakaza, who worked as a music journalist in Johannesburg, saw jazz being much more accessible there than in Cape Town. Kakaza addressed this gap by founding JiNY with social entrepreneur Koko Nkalashe, allowing musicians from the townships to play to their home crowds in Cape Town. They first started putting on gigs in Khayelitsha, the city’s largest township, before later putting on shows in community centres and music venues such as Guga S’Thebe in Langa and Kwa Sec.

“We sort of felt like everything was happening uptown and the musicians and the audience from the townships did not really have an opportunity to perform in those venues. Some of the venues were not cheap to go to and buy a ticket for or spend the night there. So the idea was to bring the music back into the township where it actually began.”

JiNY has grown to also organise gigs in the city centre, and elsewhere in the Western Cape. The shows, which typically cost 120 South African rand ($8) and half that for students and pensioners, bring together people from all over Cape Town, as well as an international audience. Some South African townships receive negative press for gang crime, but Kakaza says the events have never had any incidents of criminal activity.

As well as South African musicians such as Bosman and Mrubtata, JiNY has hosted international artists, including British saxophonist Shabaka Hutchings and US pianist Nat Adderley Jr. At Mrubata’s May show, he played with some of Cape Town’s most promising up-and-coming musicians.

“We don’t have the budget to get a whole band from Johannesburg to travel here, so we always encourage top musicians like McCoy, to come to Cape Town, and to interact and play with the youngsters, so that they also get exposure and also play with the great musicians,” Kakaza said.

Asked about the atmosphere of the events, Mrubata told Al Jazeera: “It’s very lively and reminds me of the early jazz days in Langa hall, community centres and stadium. The township audience is very vibrant – they even interact with bands sometimes.”

It is much easier for young musicians from the townships to network with older musicians these days thanks to social media, workshops and initiatives like JiNY, according to the saxophonist.

Mdingi says these young musicians have more resources available to them than ever before, and that there are a lot of concerts happening in Cape Town, Johannesburg and East London.

“In terms of exposure and the training of people, there is much, much more volume than what it used to be 30 years ago,” the patron said.

Navigating the coronavirus pandemic has been challenging for Kakaza, who calls for financial support to help the arts.

“The more people get vaccinated, the less panicky people are going to be. And I think we should take jazz outside now. We should use our parks,” he said.

“The arts give the city its identity through its people, not only through the musicians that play, but also through the people that attend these events. It’s the one way that the city can create a happy, peaceful, social cohesion, through the arts and through music.” 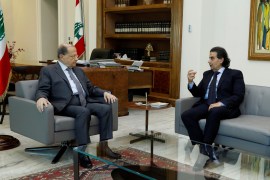 Local media reported that the musician was believed to be detained in Saudi Arabia, but no official confirmation yet. 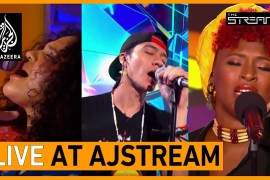 A look back at some of The Stream’s best live music performances. 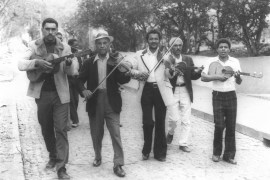 The story of morna: Cape Verde’s music of displacement and return

How music shaped by slavery, epidemics and migration travelled the world, narrating stories of suffering and resistance.