Ten years ago, the Arab Spring uprisings erupted across the Middle East and North Africa. In Syria, months of mass protests against Bashar al-Assad’s government in 2011 led to widespread unrest and a war that continued for years.

In 2012, with fierce daily battles taking place between regime soldiers and rebel fighters, documentary photographer Narciso Contreras spent five months in Aleppo, where he documented the front lines of fighting in what would become a main rebel stronghold.

It was late August 2012 when I crossed the Turkish border illegally into Syria for the third time. The month before, armed opposition groups had started mobilising, claiming that the impending fight for Aleppo would be remembered as “the mother of all battles”. And I planned to document it.

All along the road, drab vehicles and Toyota pick-up trucks packed with young fighters carrying assault rifles and rocket-propelled grenades (RPGs) sped by. After two days of hitchhiking, I finally reached the battlefield.

It was the peak of summer and the sun was blazing when I arrived in Hraytan village, just northwest of Aleppo. I entered a basement where the men – some older, but most of them young – were paying obeisance to the midday prayer. As a gesture of respect for their hospitality, I agreed to join them when one man asked me to.

That’s when I first met Ali, kneeling in shadow on one side of the room, almost an innocence about him. But the childlike expression in his eyes deceived me; later on, I would discover that he was one of the fiercest fighters on Aleppo’s front lines. On that first day, we only prayed together then parted; Ali and his group headed to an undisclosed location, while I proceeded to the war-torn city of Aleppo.

Months passed before I saw Ali again. And by then, something had changed – the childlike expression, the innocence, was no longer there, it had vanished.

In the Old City

It was late October; Ali and his brotherhood of renegades were fiercely fighting the Syrian army for control of the Old City and its surroundings – an enclave with marble passages and corridors in the middle of ancient stone and wood structures. At the entrance to the souk in the Old City, was a checkpoint set up by armed groups. Neither civilians nor journalists were allowed in.

But one day, some fighters patrolling the outer streets on the back of a creaky truck spotted me from a distance. They were old acquaintances and were enthusiastic to connect weeks, maybe months, since our last encounter. They drove me into the Old City, eager to share a cup of chai.

On arrival, they introduced me to John, the only fighter in the group who spoke both Arabic and English – which was useful to me in those days since I usually had to make do with just a few words of Arabic I had picked up, mixed with basic sign language. John wore a black balaclava to maintain his anonymity in front of my cameras. They led me into a beautiful square garden in the centre of an old house, when suddenly, emerging from a room, came Ali, whose smile dissolved any sense of formality. He welcomed me frenetically, offering me a chai to catch up.

The house – which had once belonged to someone else – was turned into a temporary military base by the armed group Ali belonged to. We sat down in the garden, the living room in front of us now filled with weapons and live ammunition: rifles spread all around; hand grenades packed in a wooden box placed under the dining table; RPG rounds piled in a corner.

Occasionally, bursts of gunfire and grenade explosions in the distance made Ali react anxiously. He squeezed his hands and shuffled his legs constantly, an agitated look on his face while he shared details of the surrounding area. Then suddenly, he stopped talking, loaded a rifle and called me to follow him. John stood up after us.

To get around safely, the rebels had broken holes in the walls of buildings, creating passageways to travel through. We snuck through these to get from house to house, soon reaching the building we were looking for, before going up the stairs to a sniper’s nest on an upper floor from where the fighters kept an eye on their enemy’s positions.

A sentinel waited for us in silence in the corridor, his finger on his mouth, gesturing for us to enter the room quietly. He pointed out a building about 50-60 metres in front of us from where an enemy sniper was hunting our position. We crawled into a living room at the bottom of the apartment. Ali recovered his calmness; looking resolute, he took up his rifle, pointing it through a hole aimed at his enemy’s position while I lay on my back on the floor following his moves with my camera.

He fired a round of shots, then we waited in silence. A few seconds later the sniper retaliated with surgical precision, breaking the clay figurines in the cabinet above our heads into pieces. We crawled back in retreat; no one was hurt.

Months before, I had followed a rebel sniper, documenting as he hunted Syrian army soldiers on the Salahedeen front line. He worked by himself, a one-man operation. I followed him, but soon rushed back in fear of retaliation after he fired a few rounds. Later, I heard he had been shot dead while on duty.

That November, the rebel fighters launched their longstanding, and ultimately unsuccessful, operation to take over the military intelligence centre of the Syrian army in Baleramoun.

One night, we were in a truck barrelling full speed ahead into a ravaged neighbourhood in total darkness to avoid shelling and sniper fire from the opposing side. Ali sat smiling next to me in the back seat. As we pulled over, the rebels rushed to a basement for cover while Ali dragged me by my body armour, “Look out the shelling! It’s too dangerous!” he said.

Night had fallen, but even in the shadows, I recognised a new stony expression on the faces of Ali and his fellow fighters. They seemed unfamiliar to me now, unlike the young men I had met months before; still fraternal but with a rougher edge, a brotherhood of renegades that seemed ready for martyrdom.

I followed Ali and his fellow fighters for few days, documenting this close yet eccentric brotherhood of combatants as they wrestled with a fully equipped and highly motivated enemy. Street by street, building by building, both sides tried to snatch pivotal positions from the other, constantly pushing back or recovering contested territory.

It was a deadlock. Still, none of them fell back. Both sides held their position; the fierce Syrian army fighting back against every attempt Ali’s group made to force them to retreat, as I witnessed when photographing the dead bodies of Syrian army soldiers in the aftermath of a raging battle. Equally, Ali and his fellow fighters were engaged in furiously repelling the Syrian army’s surprise attacks.

One day in late November, I was in the Old City when a government warplane roared in the skies above. Immediately, Ali ran for a DShK machine gun and rushed up to the roof of the building.

This usually quiet young man, often withdrawn in his own thoughts and always busy loading weaponry, would lead most of the operations I followed with his group, earning him recognition among his peers.

Despite the bright sunlight making it difficult to see, Ali rolled onto his back and, using his leg for extra support, leaned the weapon against his foot, aimed it at the plane that was dropping bombs on the fighters’ hideouts, and started firing. Once the attack ended, we walked downstairs so he could reload the “dushka”.

While other fighters I photographed would have shied away in such a scenario, Ali was ready for every single chance to fight back.

That evening, a loud flock of birds flying above us announced it was time for sunset. Under the trees in the garden, Ali and I sat drinking chai while enjoying the serenity of a red sky. Then a blast thundered in the distance, followed by sounds of gunfire, and the expression on Ali’s face twisted. The Syrian army had launched a surprise attack on the rebel’s position, forcing the combatants to rush out from all corners of the surrounding area. I went running into the street after Ali, as his fellow fighters dashed into the narrow commercial passages to fire back at the soldiers and repel the attack.

In the middle of the action, I lost sight of Ali. Minutes passed, the smell of gunpowder and the racket of gunfire filled the air. All of a sudden he reappeared, looking resolute and carrying an RPG on his shoulder.

Everybody around us took cover, as I looked for a better angle to photograph Ali. Lining myself up parallel to him, a few metres away, I squatted and waited. Suddenly, he made a quick move into the middle of the street, aimed the RPG, and fired. The rumbling of the weapon left him covered in a cloud of dust. But just as suddenly, as if by magic, the dust cloud vanished from around him and he stood victorious, raising his arm into the air in a gesture of triumph, shouting: “Allah is great!” From every direction around him, the fighters chorused his words.

Again, night came and covered everything in the mantle of darkness, while fog painted the silhouettes of the fighters dark blue as the battle raged on around us. Like in a dream, their haunting shadows ran in all directions – here and there, an anonymous fighter occasionally illuminated by a burst of gunfire – while around them, profound praise rang out in the deserted alleyways, “God is great!”.

The last time I heard about Ali, he and his group had split from their armed group to join another faction battling in northern Syria. Until now, his fate remains unknown to me. But I will always remember him in that victorious moment on the streets of Aleppo’s Old City where – for an instant, as my skin cooled and bristled in the adrenaline rush of the fight – I saw a vision of him as a child turned into a warrior. 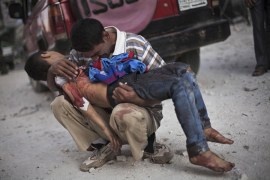 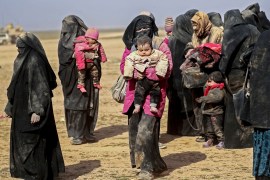 Syria: Through the eyes of its photographers

Syrian photographers capture the impact of 10 years on conflict on their country and people. 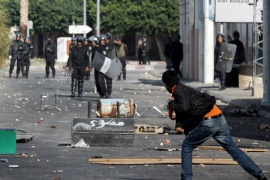 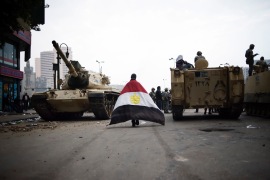