Sulaimaniyah, Iraq – Adil Majeed looked distraught as he smoked a cigarette and recounted the devastating events of the late 1980s Anfal military offensive.

Unleashed by the former Iraqi regime of Saddam Hussein against Kurdish people in the north, the campaign killed at least 100,000 Kurds, mostly civilians, with some estimates suggesting 180,000 people died. Thousands went missing and hundreds of villages were destroyed.

Saddam claimed he was quelling a rebellion after Kurdish Peshmerga fighters – who were fighting against the government – sided with the enemy during the 1980-88 Iran-Iraq war, and used Kurdish villages as their safe havens.

As part of the offensive, Iraqi warplanes and artillery pounded the Kurdish town of Halabja with mustard gas and the deadly nerve agent sarin on March 16, 1988. About 5,000 people – mainly women and children – were killed.

Weeks later, another town, Goptapa was targeted with chemical weapons. The death toll in Goptapa was arguably only exceeded by that of Halabja.

Majeed, who fled from his home in a nearby village, remembered seeing the residents of Goptapa suffocate from the poisonous gases.

“I saw people from Goptapa village on the banks of the Lesser Zab River suffering from the effects of the chemical weapons used by the Iraqi army,” he told Al Jazeera as he sat in his home in Chamchamal, an Iraqi Kurdish town located west of Sulaimaniyah City.

“We fled in fear of our lives, but we were soon arrested by the Iraqi forces,” recalled Majeed, who was 15 at the time. Although Majeed was taken to prison, his young and agile body helped him escape.

“Only one soldier was guarding the prison door. When he was off-guard, I seized the moment and climbed over the door,” said Majeed. “He fired several bullets towards me, but fortunately I was not hurt and managed to escape.”

While Majeed lived to tell the tale, he lost eight members of his family during the campaign, along with 163 people from his village in the Garmiyan area of the semi-autonomous Kurdish region. His only wish is to find their remains.

“After 33 years I cannot forget them,” he sobbed. “I wish I could embrace their relics.”

Kurdish officials say the whereabouts of thousands who went missing during the offensive is still unclear. Families have been trying to identify their bodies in mass graves.

In July 2019, four mass graves with dozens of bodies believed to be Kurds killed by Saddam’s regime were found in the Samawa desert of al-Muthanna province in southern Iraq.

Although a team was tasked with identifying the bodies, Taimour Abdulla, a massacre survivor, raised concerns about the excavation process.

According to Abdulla, the remains of dozens of bodies exhumed at the mass grave and kept at the Medical-Legal Institute in Baghdad have been mixed up with one another, and DNA testing to help identify the bodies has not even begun.

“I could not tolerate to see this type of abuse and dishonour inflicted on the remains of our loved ones,” he said.

Abdulla said what he saw pushed him to file a lawsuit against the Iraqi Martyrs Foundation, the Kurdistan Regional Government’s (KRG) Ministry of Martyrs and Anfal Affairs and the governor of Samawa for their mishandling of the excavations.

But instead of looking into his complaint, the authorities filed a lawsuit against him, said Abdalla. He said the digging process has since been put on hold.

Like Majeed and Abdulla, Najiba Mahmud, a 56-year-old Kurdish woman from the Garmiyan region, also lost family members in the Anfal campaign.

“When the Iraqi army attacked our village, I fled with my children towards Chamchamal on the back of donkeys,” Mahmud told Al Jazeera. “But my husband was left behind, and we’ve not seen him since.”

After more than 30 years, she hopes the KRG will help her find his remains and put him to rest.

According to Mahmud’s son, Qasim Kadhim, the KRG has failed the survivors of the Anfal campaign and politicised their cause for “political gains”.

“Anfal is the most important issue for the Kurdish nation. It cannot be ignored,” Kadhim told Al Jazeera. “Some members of the Iraqi government do not want the world’s attention on Anfal. So they put obstacles in the way.”

Kadhim, who heads the Manawa Organisation for victims of the Anfal campaign, said the KRG has so far failed to provide DNA testing facilities to help identify the bodies.

He accused the two main ruling parties in the KRG, the Kurdistan Democratic Party (KDP) and the Patriotic Union of Kurdistan (PUK), of harbouring former Kurdish mercenaries who collaborated with the Baath regime during the Anfal campaign.

Latif Fatih Faraj, a Kurdish political observer, who holds similar grievances to Kadhim, told Al Jazeera the governments of Baghdad and Erbil have “negligent” when it comes to helping survivors of the Anfal campaign find their relatives’ remains.

He added authorities have also failed to compensate the survivors and bring collaborators to justice.

But according to Dheyaa Kareem, head of the Mass Graves Department at the Iraqi Martyrs Foundation, DNA testing is already in process on bodies that were exhumed.

“DNA tests have been carried out on and the results are ready to be submitted to the KRG authorities,” Kareem told Al Jazeera.

“We still need to take blood samples from relatives of the victims in order to complete the identification process. Then we can hold a burial ceremony in the Kurdistan region,” he added.

According to Hakim Adil, head of media at the KRG Ministry of Martyrs and Anfal Affairs, while the medical and legal aspects of the process are in place, the process has been delayed because of the coronavirus pandemic.

Kareem also acknowledged the delay but did not specify a reason for it. “We hope in the coming months the exhuming process will resume,” he said. 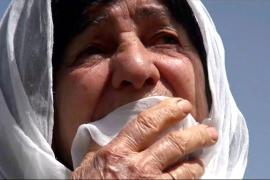 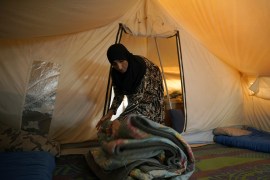 While camps have been described as ‘open-air prisons’ they also functioned as a refuge for families with nowhere to go. 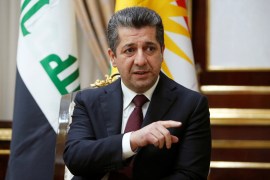 The spike in tensions between the federal government and the KRG follows the passing of a fiscal debt bill in November.