Baghdad, Iraq – Zahraa Ghandour had been gone from Iraq for almost a decade when she touched down in Baghdad in 2011. Armed with grit, the then-20-year-old began her upward battle to carve out a niche for herself in the country’s male-dominated film industry.

“I decided to work in this field when I was 12, and I always imagined it to be in Iraq, to tell stories from here,” she explains. “I left but [Iraq] stayed with me all the time.”

Ghandour, 29, is one of countless young Iraqis born in the midst of catastrophic United Nations-imposed sanctions and whose early teenage years were marred by the violence that accompanied the 2003 United States-led invasion.

By the time she was 13, Ghandour had lived through what most people do not experience in a lifetime, including exile. In 2004, a fast-deteriorating security situation in Iraq forced Ghandour’s mother to leave everything behind and relocate to Damascus, Syria.

Like so many Iraqis in the diaspora, Ghandour yearned for her country and planned an imminent return. But it would take her seven years and a second relocation to Lebanon before she was reunited with her beloved Baghdad.

Today, she is one of Iraq’s most celebrated up-and-coming directors and actors and has cemented herself as a vocal women’s rights activist.

In less than a decade, Ghandour’s work ethic and passion have seen her involved in numerous projects, including documentaries, award-winning films and social initiatives aimed at increasing the presence of women in Iraqi arts and the public sphere.

In her personal life, she has defied cultural expectations through small daily acts of defiance, like living on her own and being unabashedly opinionated. In doing so, she has helped pave the way for other young women.

“There is a positive effect from some of the things that I do for girls of my generation and younger,” she explains.

In the same way that Ghandour opens her doors to other women, the young actress found her anchor years ago in one of Iraq’s greatest feminist icons.

Lawyer and activist Hanaa Edwar, 75, is petite but commands respect as few can. Her social work spans more than five decades and includes the co-founding of non-governmental organisations like Al-Amal Association and the Iraqi Women Network, both of which provide support to the country’s most vulnerable.

Edwar has also offered legal counsel to countless women and was involved in implementing a law against honour killing in the Kurdish region and opening the first-ever women’s shelter in the city of Erbil.

Born decades and miles apart, Ghandour and Edwar’s lives have many parallels. Both women were forced out of Iraq, both defied cultural norms and both have been key in voicing the struggles of their respective generations.

I have a stage and I’m using that because it’s so unfair the life we’re living here as women.

In 2012, their paths became inextricably linked by a common goal: furthering women’s rights in Iraq.

“But Zahraa’s style is so calm,” remarks Edwar with a laugh, “Not like me!”

Unlike Ghandour, Edwar speaks quickly and energetically. She cares little for her own personal story, instead, she prefers to discuss her humanitarian work in detail and praise the new generation of Iraqi women, including Ghandour.

“I have seen in her a wonderful feminist who tries to educate herself,” says Edwar. “I felt so in touch with her, not only as a mentor but to be friends with this woman.”

“Zahraa built herself independently,” says Edwar. “It was a struggle, not easy, but she could really achieve this independence in her life, to be the master of her life, this is a wonderful thing which I needed in my youth also.”

But the vast majority of Iraqi women do not have the privilege of having their own living space or independence from their family or husband.

“She is not under the influence of members of her family, that is the privilege for Zahraa, others suffer a lot from family pressure,” explains Edwar, whose own home has turned into a sporadic shelter for women escaping domestic abuse.

Women and men have equal rights under the Iraqi constitution. But years of economic sanctions and armed conflict, coupled with misconceptions of traditions, tribal laws and a lack of education, have pushed a large portion of the female population into the private sphere.

The marginalisation and vilification of Iraqi women have had devastating effects, including the gunning down of vocal female activists and social media influencers by unknown assailants and the rise in domestic violence amid a countrywide COVID-19 lockdown.

Iraqi society “tries to impose that women are under the control of the patriarchy, as well as the traditions and religious fatwas,” says Edwar, whose knowledge of Iraqi law and tireless sense of justice has helped countless women over the decades.

“Hanaa has literally saved the lives of women,” explains Ghandour of her mentor. “Her outside image is amazing, it’s very powerful, but knowing details about her life and what she went through and [is] still going through just made her way bigger.”

Ghandour is currently working on an independent documentary set to delve into the life of Edwar as well as her own and the parallel struggles faced by both women.

“Some things she went through in the 60s and 70s, I’m still facing now as a woman. The exact same simple things” says Ghandour. “That makes me sad because we didn’t move forward, we just moved backwards on many levels.”

‘I have a stage and I’m using that’

Even in her field, says Ghandour, hypocrisy and sexism prevail. And in a country where pursuing the arts is not seen as an appropriate career path, her quick ascent in the film industry has come at a price.

Her poignant portrayal of Amal in the 2019 film Baghdad in my Shadow saw her become the first Iraq-based actress to shoot an intimate scene, leaving in her wake a barrage of critics.

“They say that I’m showing the wrong image for Iraqi women and I’m not respecting the religion,” says Ghandour. “Almost every actress I know here has problems with her family and her community … I believe the society here will never really open for women to be in the arts field.”

Sometimes, the backlash becomes overwhelming. “Hanaa is the person that I think of when I want to give up – because sometimes it’s just too much.”

Despite the challenges, Ghandour’s voice continues to surge over the noise of a patriarchal society too often bent on silencing women. “I have a stage and I’m using that because it’s so unfair the life we’re living here as women.”

Both have expressed optimism and hope for Iraqi women, particularly since the October 2019 countrywide demonstrations, in which young men and women took to the streets together to demand the overthrow of the government.

I feel so inspired by a number of these young activists in Iraq. With their courage, they can make a change in our country.

A shift in gender dynamic followed the months of demonstrations, which saw men and women share living quarters, forge friendships and even fall in love under the banner of a common cause.

“I feel so inspired by a number of these young activists in Iraq,” says Edwar. “With their courage, they can make a change in our country.”

One of the key events of the months-long social uprising was the first-ever countrywide women’s march in February 2020, when the streets of Iraq’s cities filled with banners and chants as women of all ages demanded their rights. Ghandour, was there to document it.

She filmed the historic moment in the same way that she has been documenting her country and her city for a decade, intent on telling the story of her people.

After seven years far from home, there’s nowhere else Ghandour would rather be than on the warm, chaotic, streets of her Baghdad, battling her causes.

“It’s the energy it’s the life that I see, even in the times that Baghdad is full of death, at the same time it’s full of life.” 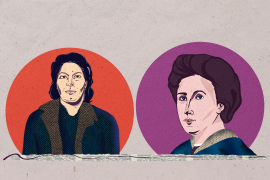 How a revolutionary Polish socialist killed in 1919 inspired a Palestinian women’s rights activist. 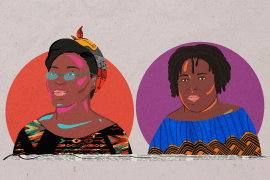 ‘Not a noisy gun’: The women peacebuilders of Liberia 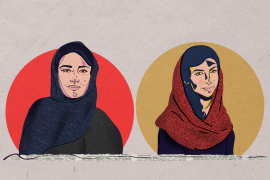 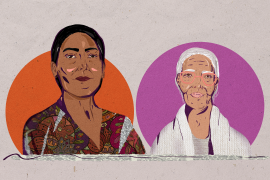 As a baby, she was left to die on a rubbish dump. Now, she is determined to help others for as long as she can.