Organisers and participants in women’s rights marches across Pakistan are facing a sustained campaign of misinformation, blasphemy allegations and threats, an escalation of the conservative response to the country’s feminist movement in recent years.

On March 8, for the fourth consecutive year, thousands of woman across the South Asian country attended the Aurat March (Women’s March) events held in towns and cities to mark International Women’s Day.

“It’s a day for us to celebrate our femininity, to share our traumas and pain, to express ourselves as we deem fit, and to demand our right to equality, health, education, mobility, and freedom from violence,” said B, an Aurat March organiser from Karachi.

B, and all Aurat March organisers interviewed by Al Jazeera, asked to be identified only by their initials due to threats.

“Despite everything, we will keep demanding our rights and coming out to march,” B said.

Pakistan ranks near the bottom of global gender parity indices, with the World Economic Forum’s Global Gender Gap Report 2020 (PDF) rating it at 151 out of 153 countries ranked.

At least 28 percent of women aged between 15 and 49 have experienced physical violence, with 40 percent of the men polled agreeing that it was acceptable to beat your wife under certain circumstances, according to government data (PDF).

Not all in the media were critical of the march, but the widespread anti-march sentiment does tap into the problematic relationship between Pakistan’s mainstream media and the country’s feminist movement.

“Of course, there are many media outlets, digital, print and television, that reported on the march accurately and professionally,” said S, an Aurat March organiser in the eastern city of Lahore.

“But overwhelmingly, the response we saw on TV, in digital spaces and at the actual march was sensational and misleading.”

Attendees and organisers of the march in Pakistan’s largest city of Karachi, the capital Islamabad and Lahore had similar feedback.

“In Lahore especially, women attendees were aggressively followed by men with mics and cameras, despite saying they don’t want to engage,” said Z, an organiser in Islamabad. “Women across the country were asked provocative questions, especially about religion.”

Every year, the vitriol against the marchers changes in form and volume, organisers say.

In 2020, the most tangible episode of violence was perpetrated by a religious right-wing group in Islamabad whose supporters threw rocks and bottles at the march.

This year, the violence was online, by anonymous social media users who doctored a video of sloganeering women to make their words appear “blasphemous” against Islam.

The unverified video was then shared widely on social media. At least three senior male journalists retweeted the video before realising it was fake and deleting their tweets.

Some apologised for tweeting the false video, but the damage was done. In Pakistan, convictions for blasphemy can carry a mandatory death penalty, and such allegations have increasingly seen mobs take matters into their own hands.

Since 1990, at least 77 people have been murdered in connection with blasphemy allegations in Pakistan, according to an Al Jazeera tally. The allegations have increasingly been weaponised by religious right-wing groups.

No progress has so far been made in attempting to discover who first introduced the doctored video to social media.

Another false allegation against the marchers was that they were waving a French flag, and in doing so supporting French President Emmanuel Macron’s recent comments seen by many to be Islamophobic.

In reality, the flag being waved was red, white and purple – not red, white and blue like the French flag – and represented the Women’s Democratic Front, a left-wing feminist group that took part in the march.

“Those who shared the [fake] videos knew what they were doing, they are intelligent enough to understand how quickly baseless blasphemy allegations catch fire in this country,” said L, an organiser from Lahore. “They have left us standing in the line of fire.”

For some who shared, and later deleted, the doctored video, there appears to be a complete lack of understanding of Aurat March’s demands and their manifesto.

“If you believe that a person is bad, and you see them run toward you a knife, won’t you expect they want to hurt you?” he asked, referring to the feminists who marched.

Mangalwala said feminist marchers had “made some mistakes in the past [with their placards] which is why some people may believe the worst about them”.

Doctoring videos and photographs of women as a means of defamation or inciting violence is not new in Pakistan. It has been a tactic seen repeatedly during the last four years when photos of women at the Aurat Marches are often altered and shared on social media.

“The original recipient of this form of gender-based violence maybe be the late former prime minister Benazir Bhutto whose doctored photographs in a mini skirt were thrown down from a helicopter […] before the 1988 general election – in the hopes of making her appear ‘Westernised’,” said Beena Sarwar, a veteran journalist and filmmaker.

In 1988, Shahida Parveen, a Pakistani woman, was arrested under the draconian Hudood Ordinances for allegedly committing adultery.

The Committee for the Repeal of the Hudood Ordinance gathered donations and ran two front-page advertisements to appeal Parveen’s case, one in the English-language daily Dawn and one in the Urdu-language daily Jang.

The day after the adverts were published, a group of religious clerics went to see the editors of both newspapers, demanding that apologies be printed for these advertisements since they “hurt religious sentiments”, says Zohra Yusuf, a veteran journalist and activist who was part of the group that ran the advertisement.

Dawn stood their ground; Jang capitulated to the clerics and published an apology to its “gentlemen” readers, attributing the adverts to a “mistake” by a junior staffer, Yusuf said.

Between the 1980s and 2021, little has changed in how the religious right has been able to influence Pakistan’s mainstream media, particularly the Urdu press.

In the follow-up to the 2021 march, prominent right-wing television hosts roundly denounced the marchers as raising “vulgar” slogans, and journalists covering the marches confronted protesters with questions regarding the validity of their protest.

The criticism was not restricted to television, with the armed Tehreek-e-Taliban Pakistan (TTP, also known as the Pakistan Taliban) group also threatening marchers this year.

The TTP accused the Aurat March of being “vulgar”, “preposterous” and “foreign-funded” – words often used to describe the march by journalists in the mainstream Pakistani press.

When television co-host Mangalwala claims that the Aurat March has made “mistakes” in the past, he is referring to three placards that were brought to Aurat March by attendees in 2018 and 2019 that caused an uproar in widely conservative Pakistan.

He believes that if Aurat March wants the media to engage with them, the organisers should dissociate themselves from these three slogans.

Some organisers say they are done explaining slogans they do not believe should be controversial to anyone but a misogynist, while others said they were happy to continue engaging in the debate until they could convince everyone who disagrees.

“Firstly, we have explained these placards repeatedly, through words and videos we have conveyed the sentiments behind these placards,” says B, the organiser in Karachi.

“If journalists dig up their own archives, they will see the amount of men raping, mutilating, and harassing women each year – hence the call for ‘my body, my choice’. They will see the number of men who physically harm and murder women, each year, for not serving them food fast enough, or warm enough.

“They will see that when women write on a placard that they refuse to sit properly, they are demanding that their bodies not be policed and objectified, because again that too often leads to men raping and killing women.”

L said the protest was not “a performance for the male gaze”, and so the demand that it be “polite” was nonsensical.

This year’s protests were organised with detailed manifestos focusing on women’s health, particularly in the context of the COVID-19 pandemic.

“Why don’t they read the manifestos and ask us questions about our official demands concerning women’s health and safety?” asked L.

Attendees brought placards raising a variety of concerns. One placard read “A woman’s real home is one from where she can’t be kicked out”. Another read “Control your desires, not women”.

A trans woman came to the march, with the names of murdered trans women written on her blood-red shirt.

At Aurat March Lahore, organisers decorated the road with an installation, titled “Stains of Patriarchy”.

Organisers hung up clothes donated by women who had faced gender-based violence. On each, the women had detailed how old they were when they first experienced the violence, and who committed it.

For some critics, however, it always comes back to those three slogans.

“At the march, if my reporters see something vulgar or obscene they will question it,” says Syed Zeeshan Aziz, group manager for UrduPoint, an independent digital news organisation.

“My reporters should ask questions about women’s right to education, property, health and freedom from violence and harassment, but they can also ask about old placards.”

In one 12-minute UrduPoint video this year, a reporter focuses most of her time asking attendees and organisers to clarify those three older placards.

The video is titled: After Marriage, Wives Want Breaks from Physical Relations With Husbands: The truth about ‘My body, my choice’.

In another video, a woman carrying a placard saying “No Uterus, No Opinion” is asked if she wants her uterus removed. In the video, the word “uterus” is censored.

“There were reporters at the march who were heckling women, others manipulated videos for sensationalist effects. Some of this is because misogyny sells and some of it is because our reporters are part of our patriarchal culture, and they have inherent biases,” says Sahar Habib Ghazi, a media strategist and journalist.

She believes, however, that the media industry has come a long way in how it reports on women.

“There was a time when rape stories weren’t even reported. Look back to how the print media covered Mukhtaran Mai’s rape case in 2002, the difference is apparent,” says Ghazi, citing one of Pakistan’s most high-profile gang rape cases.

Others say that while things are improving, the status quo is still powerful.

“People have recognised that  Aurat March is intersectional and women won’t settle for less than equality, so some segments of the media that want to preserve the existing power structure will continue to sensationalise reporting,” says Farah Zia, a journalist and leading rights activist.

B, the organiser in Karachi, says the improvement in news media’s coverage of gender-related issues cannot come soon enough.

“They risk the lives of women, trans and non-binary people when they sensationalise footage, ask provocative questions, and retweet and share unverified baseless allegations, without accountability,” she said.

“Meanwhile, we will keep marching, demanding equality and freedom of all women and other gender minorities, and trying to make Aurat March a safe space for all.” 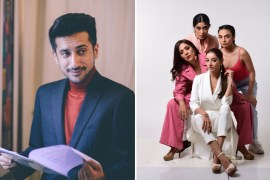 Churails has been lauded for breaking new ground, smashing stereotypes and putting women at the centre of its story. 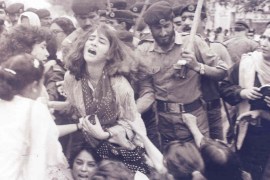 Young activists and their older counterparts explain why they are uniting to fight for women’s rights in Pakistan. 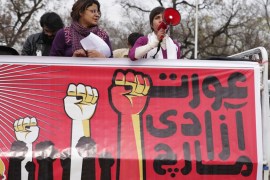 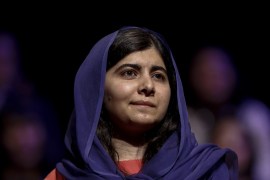 Pakistani Nobel laureate signs deal that would ‘draw on her ability to inspire people around the world’.