Lexington, Kentucky – For Sarah Williams, the revolution is as much about recognising the past as it is about what comes next.

The 38-year-old civic change agent and organiser from Lexington, Kentucky, has been at the forefront of racial justice protests for years. But she is also working to save Black communities in her hometown from gentrification and, at the same time, preserve her family’s history and her community’s past.

The hard moments “remind you of the shoulders upon which you stand”, Williams says as she reflects on the last year. From raising her children during COVID lockdowns to being arrested during protests against police brutality in July, 2020 definitely took its toll on Williams. But it is in those difficult moments that she leans on the teachings of those on whose shoulders she stands, especially those of her 94-year-old grandmother, Grandmama Mary “Sue” Taylor.

“Living through her childhood prior to the civil rights movement, there’s just a certain amount of courage and endurance and perseverance, that no matter what happens, you’re going to overcome,” Williams says, highlighting her grandmother’s spirituality and deep roots in the Black Church.

“Very akin to what our ancestors did when they ran from slavery and to the north, there’s a certain amount of faith and courage that goes along with taking that journey,” Williams tells Al Jazeera. “And so in many ways, I carry that forward with me today.”

In her work on the front lines of today’s racial justice movement, Williams is not afraid of confrontation. But her goal is to speak a truth that ultimately shifts the way people think and act.

“When we reveal truths, it can feel very brutal and aggressive,” she says. “But I just try to remind people that we’re not here to inflict physical harm. That might be what it feels like,” she adds, “but we’re here to change your mindset … and pull at your heartstrings.”

It is a lesson she has learned from her grandmother, who always speaks the “unadulterated truth”, Williams explains. “She doesn’t mince her words and I think when you’re doing social justice work, that’s at the root of disturbing people’s comfort zone.”

Williams shouts those truths on the streets during protests, but she also reveals them in her research and work on the displacement of Black communities in Lexington and the surrounding areas.

Williams, who also has her nursing degree, first really noticed the gentrification in Lexington and its effects on her community in 2014 when she returned to the city while working on her master’s degree. “It didn’t feel like home,” she recalls. Williams says she would walk down the streets where she grew up and people would look at her like she did not belong in her own neighbourhood.

At that moment, she started her research to understand why and how the displacement of historically Black communities – neighbourhoods whose roots go back to the Civil War era – was happening, as well as reveal and expose the developers, or “colonisers”, behind it.

“There was this extreme, immense sense of a loss of community among people who remained, and I wanted to organise to salvage whatever we could,” Williams recalls.

Williams and other community members held fish frys and other fundraisers to come up with the capital to save any old building – even those that were “dilapidated” – so that they could hold on to their history. But due to many factors, including the “red tape” one must cut through and the rising property values, they had little success.

It is a frustrating outcome, especially as Black neighbours are pushed further and further to the outskirts of the city and to neighbouring towns.”It’s like that same level of disposability that has been inherent to white supremacy and gentrification,” Williams says. “It also affects our ability to recover our history. So, how do you know where you’re going if you don’t know where you’ve been?”

On a deeply personal level, documenting and preserving her own family’s history has become especially pressing for Williams in recent months. Grandmama Sue, the woman Williams says inspires her in all that she does, was recently released from the hospital to hospice as she “transitions to the spiritual realm”, Williams says.

Grandmama Sue grew up in Huntertown, Kentucky, less than 24km (15 miles) outside of Lexington. Huntertown, like many historically Black communities in this part of Kentucky, was known as a “freetown”, which was established by freed enslaved people following the Civil War.

The small Black community existed for more than 100 years, but when construction started on a new highway not far from the community in the 1960s, the area flooded, causing raw sewage to spill from its septic tanks. By the early 2000s, many of the families still living in Huntertown were relocated and the buildings razed.

Today, Huntertown consists mostly of grassland and forest area. Local residents are working to turn the area into a park and document its history along the way.

Williams has visited Huntertown on several occasions over the last few months.

As she works to document the history of Huntertown and her family, Williams, with the help of Grandmama Sue, continues to piece together their past, and find inspiration for moving forward.

Recently, Williams found out she shares the name of one of her ancestors. “That was just a really full-circle moment that confirmed my existence beyond anything I ever thought,” she says. “I really am my ancestors, literally in name. That’s just a very powerful feeling.”

In another discovery, she learned that her great-grandfather, Grandmama Sue’s father, sued after his buggy was hit by a car in the early 1900s. “That was just amazing for me to find and be able to call her and confirm the information,” Williams says.

“My ancestors knew who they were and they knew their worth, and they were willing to fight for that,” she adds. “Finding all of this history and being able to discuss it with my grandmother and for her to be able to share stories, it’s all of the strength I need to continue this fight for liberation, for freedom and equality.”

As Williams continues that fight, she will forever hold her Grandmama Sue and all she has taught in her heart.

“Even in sitting here and taking care of her in these moments, there are times where I’m like, ‘Grandmama, I love you so much,’ and she’ll say, ‘Love yourself’ or, ‘I love myself,'” Williams says.

“I think that’s so important for us to remember – that we can’t give from an empty cup, and that at the root of revolution is love,” she adds. “That’s really the whole point of this revolution that we seek: knowing that we have to have that love within ourselves before we can pour that into the community and people around us.” 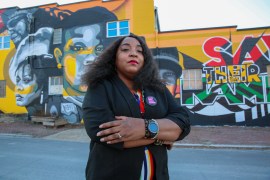 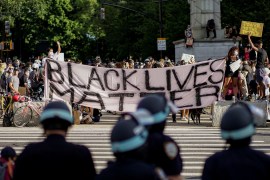 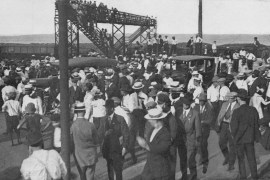 Dying to swim in Chicago: Race riots and the ‘Red Summer’ of 1919

How the drowning of a Black boy led to two weeks of racist violence and exposed the segregation at the heart of Chicago. 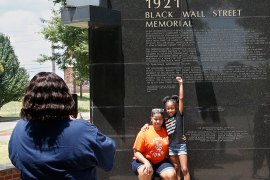 Burned bricks and a fragment of a church basement are about all that remains of an historically Black district.