A white Christmas tree sits on top of the television console as the sound of Bing Crosby pours through the small radio in the corner of the apartment I have only seen in pictures. The living room, mid-century modern before it lacked the trendy label, is only half of the picture, the rest I create in my imagination. Outside there is no snow on the ground, instead the sun shines against the heated tar. It is a California Christmas for two New Englanders.

On the other side of the living room, my grandmother’s roommate begs her to get in the picture with her daughter. My mother is 10 and surrounded by a toy ironing board, a baby doll in a high chair and a large baby carriage. Domesticity is a promise for her even before womanhood takes hold.

“No, no,” my grandmother says, shielding her face with her hands. She hates pictures and will go on to try to throw boxes of them away on several occasions throughout my childhood.

There is a hiccup in my flashback. Maybe it wasn’t my grandmother’s female roommate taking the picture, but rather her second husband – the one she married in haste when he ventured to Boston on a business trip. The one whose history is mired in secrecy. He is the younger man Gram followed to California after marrying him in a courtship her family deemed too brief. She dragged my mother along. Her first marriage failed years earlier just as this one will, not long after its beginning. A twice-divorced woman so different from the women she grew up with back in Boston – the ones who are still married, the ones who don’t work in an office to pay bills or take a roommate to afford an apartment, the ones who are not single mothers with the red splotches of divorce staining their perfect 1950s storybook lives, the ones who are indeed getting a White Christmas.

My grandmother peels off her black pencil skirt and the mauve blouse, which matches the mauve eyeshadow and compliments the pale pink lipstick. From the closet organised by clothing item and colour, she pulls her duster, an informal coat dress that often covers her clothes when she cleans, just as it has for so many women before her. When I see her, I think of the housewife she never was. The one she never wanted me to become. Even if her marriages survived, she wanted different things. In the 1950s and 1960s, she wanted a career. She has one and still, each evening, my grandmother sheds her office persona for the role of wife and mother.

“I’m putting the chicken in,” she says as she buttons her duster and walks towards the kitchen where she will remain first to cook dinner, then to pay bills – as the sound of the radio competes with the calculator keys and the dishwasher my grandfather bought for her. He is her third husband. The one she will outlive by three months though they will die at the exact same hour and minute.

The duster’s origin story begins in the late 18th century when they were made of rough-hewn canvas. Cowboys wore them to protect their clothes as they rode on horseback. They also kept people’s clothes free from dirt and dust when automobiles first came along. In the 1920s, the practical duster got a makeover. The coats featured ornate embroidery and were made of velvet. They became fashionable instead of functional. In the 1950s, the ever-changing garment became a sort of housecoat worn by housewives to cover their clothes while dusting the house or cooking dinner.

“I advanced as far as I could,” I hear my grandmother telling someone as I pass her. She is dying. Motioning to the closet, she wants her duster. After running errands all day, Gram is exhausted. I remove the hot pink velour duster from the closet and place it over a chair. Still my grandmother goes on about her career trajectory. I’ve heard it often and remain in awe. Working her way up from secretary to the highest position in her field as the executive assistant to the president of an aerodynamics company, my grandmother was the woman behind the man. Had she been born later, she would have simply been the woman who ran the company.

The weak body that holds her sharp mind bothers Gram. “I would be the healthiest 79-year-old he’s ever seen – if not for the cancer,” my grandmother says about her doctor’s appointment earlier in the week and the compliment the oncologist bestowed. The duster she once filled out with her Italian ass and hips hangs loosely. The skeletal frame beneath doesn’t reveal the power of who she still is and how hard she will fight this invisible invader.

“I should have had them take it all, uterus and ovaries. I haven’t needed them since I had your mother,” my grandmother pulls a tissue from the pocket of her duster to hand to me. She is always prepared. I am crying. She is not.

Gram had one child at 19, just after getting married to my mother’s father and her first husband.

We came later, me and my brother, after my mother could no longer care for us. My grandmother fought my father for custody because he was an addict, just like her only daughter, the one who left her children and died at the age of 30 of a drug overdose.

“You didn’t know,” I say and of course none of us do. We do not know our role in the world or how things will shake out. We don’t think about the ways our bodies may some day go on to betray us. We don’t think about how we will defy the conventions of the time we grew up in because we are different than those around us. We don’t understand what it means to blaze a trail before others are ready for us to do so, one that will light the way for the generation that comes after. The one we should have been born into.

The pink duster sits in the back of my closet. I drag it out to wear as part of a costume, a 1950s housewife. It will cover the dress I wear underneath. It no longer smells like her, a mix of her old perfume and roses, as it did when it lived in her closet. The smell has faded in the eight years since her death. As I put it on, I think of the history of the duster from cowboys to housewives. Where did things shift? I wonder the same about my grandmother’s life. For her, the duster represented the one way she was like the women of her time. The one common thread that bound them together.

My grandmother rocked the duster, in every shade of pink from salmon to magenta, and every fabric from velour to linen. My grandmother, Rose, proved women could be many things just as the versatile duster could. I’m thankful to have it here as a reminder, I think, as I stick my hand in the pocket and pull out a folded white tissue. Gram is always prepared even now. I wipe away the tears before they have a chance to fall. 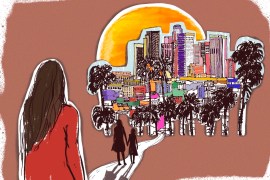 Sneakers, California sun and my mother’s other daughter

They looked at my ocean, lived my dream. My mother’s other daughter was the me that I wished I could be. 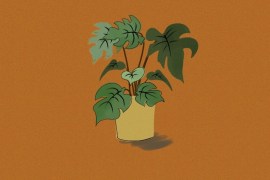 A mother’s death, a childhood without her and a mysterious plant

When a plant arrives after her mother’s death, a girl finds in it the parent who never had the chance to care for her.