Amor Masovic has spent 28 years searching for human remains across Bosnia and Herzegovina.

But in that time, there have only been a few times, no more than 20, when people have come forward with information – tips on where the bodies are buried.

“The amount of information [obtained] from insiders who were involved in war crimes, or at least in burying war crime victims, is negligible,” Masovic, director of Bosnia’s Missing Persons Institute, told Al Jazeera.

Many participated in war crimes in Bosnia, and they still know where the remains are currently buried – from the person who pulled the trigger and the driver who transported the bodies from the execution site to the mass grave diggers.

But few have stepped forward with information, even anonymously.

Despite the difficulties, more than 75 percent have been found, making Bosnia “the leading country in the world” in solving cases of missing people, according to Masovic.

More than 3,000 clandestine mass graves have so far been uncovered, a “remarkable” achievement, says Sandra Sostaric, forensic coordinator at the International Commission on Missing Persons (ICMP), with its headquarters in The Hague.

But 25 years since the Dayton peace agreement was signed, ending the war, 7,573 people still remain unaccounted for.

Over the years, Masovic and his team have looked to changes in the soil for clues.

Most investigations have relied on witness testimonies. As survivors began returning to their homes in 1996, Masovic and his team would visit locals and ask if they had noticed any changes to the ground.

But as time passes, the odds of finding the missing are becoming increasingly difficult.

In countries such as the United States, forensic researchers have been developing technology that could help uncover mass graves, with the help of a drone or helicopter.

Light detection and ranging, or Lidar, is a remote sensing technology that quickly sends down many pulses of light, or lasers, to the ground to measure distances to the Earth.

The data that it collects can then detect subtle changes on the ground which would otherwise go unnoticed.

Ideally hooked to a drone or an aircraft, it can scan large areas, penetrate through vegetation and pick up subtle anomalies of the Earth’s topography – such as those that are a result of human decomposition – and pinpoint potential locations of mass graves.

Until now, the technology has been used to enable driverless cars to “see” and for uncovering ancient ruins. Recently, it uncovered the oldest monumental construction ever found in the Maya area, from 3,000 years ago.

And researchers now say that ideally, it can now be used in places such as Bosnia, and other war-torn countries, to find mass graves.

In 2013, they began examining three differently-sized graves – the largest of which contained six bodies, with a tripod-mounted Lidar scanner.

Over the course of nearly two years, they discovered an elevation change in the ground where the graves were buried – proving Lidar could potentially be used to find mass graves elsewhere.

“As individuals decompose while in the ground, the grave subsides a little; there’s a change of depth,” Amy Mundorff, a professor who participated in the study, told Al Jazeera.

An initial drop occurs that takes the shape of the grave, and as the body decomposes, the soft tissue mass that deteriorates provides more space, creating a secondary drop. 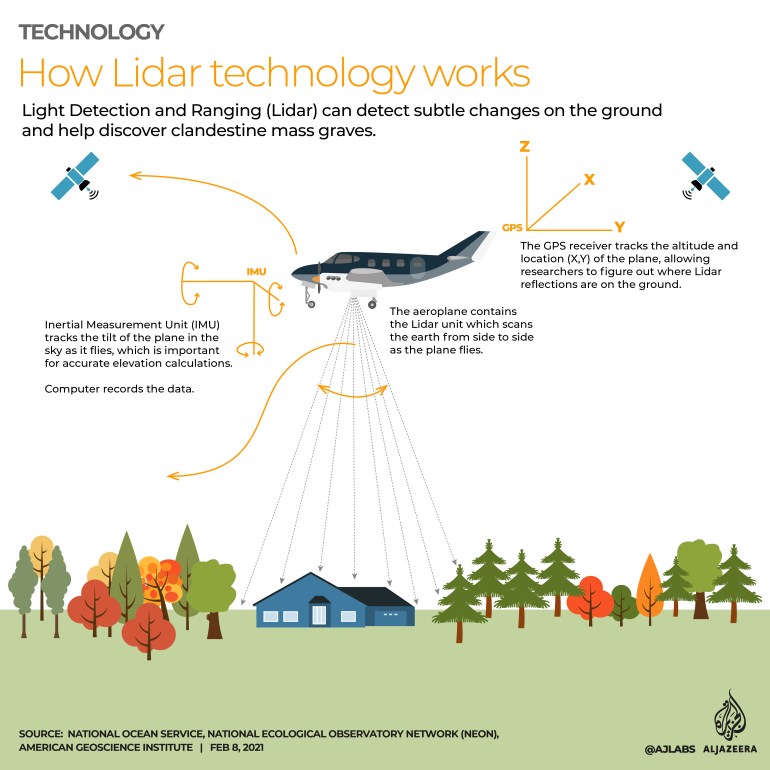 “But normal topography, normal ground relief, there’s lots of ups and downs. It’s hard to tell what is a natural drop and what is a drop because of a grave and that’s what we were trying to quantify,” Mundorff said.

“There have been a number of times people have gone out and used Lidar technology to try to find graves and they can’t. The reason is because of these natural undulations in the Earth, and so what we were doing with Lidar is called change analysis.

The situation in Bosnia was the impetus for their project, but whether Lidar can detect graves as old as 30 years is yet to be seen.

Lidar scans of the land before the atrocities took place would be needed to compare the differences, records which should be available because the technology was used for building infrastructure, even decades ago.

“I think it can be done,” Mundorff said. “Unfortunately for Bosnia, a lot of those graves were pretty big. So the resolution doesn’t have to be as high as if you were looking for a single grave.”

The ICMP’s Sarajevo office told Al Jazeera that Lidar-based techniques are now being explored for use.

The Faculty of Geology and Geoengineering in Tuzla, Bosnia, which has Lidar equipment, has approached the Missing Persons Institute to revisit three locations around Srebrenica to try to find graves.

Sostaric, the forensic coordinator at ICMP, told Al Jazeera the remaining missing people are now the most difficult to find.

“Some people are getting old and are taking this information with them to the grave,” she said. “There is a possibility that some people will never be found because there’s no way to find them.

“[That’s why] I welcome this initiative … because it’s foraying into trying new technologies and probably something will come out of it.”

Sostaric said Lidar may be effective if one already has an idea of where to look, at most a few square kilometres.

“We’re talking about areas where gravesites have been excavated previously and there is an assumption that there might be more in the broader area,” Sostaric said.

“If it’s too big of an area, too many false positives might be a drain on time and resources.”

While Masovic welcomed the possibility of Lidar use, he said Bosnia’s biggest obstacle in finding the remaining mass graves, is that the Serb-run entity of Republika Srpska does not have the political will to help find the missing people.

“In every possible way [it] tries to slow down the process,” Masovic said.

“The leading politicians [in Republika Srpska] don’t care about discovering the remains of missing people due to a very simple reason – the highest percentage of missing people in Bosnia are of Bosniak ethnicity, nearly 85 percent.

“So I think I’m justified in asking whether the government would be ready to provide for helicopters to use this technology in discovering mass graves.”

In his team, 18 investigators work on the ground to find the remaining 7,573 people.

“It means that each investigator has to find more than 320 people who have been missing for the past, 25, 28 years – victims of war crimes in a situation where the state supports those war criminals.

“I would be glad to try this type of technology in Bosnia,” Masovic said. “If such a project starts, we at MPI would be happy to include our resources as well.