Baghdad, Iraq – Thirty years have passed since Walid William Esho had to identify the charred remains of his mother in the back of a pick-up truck. The image is still seared in his mind.

On February 12, 1991, Esho – then 18 years old – drove his 45-year-old mother, Shonee Shamoan Eshaq, to public shelter number 25, a bunker in their western Baghdad neighbourhood of Amiriyah where families were taking cover from the US-led aerial campaign Operation Desert Storm, launched earlier that year.

Like most single men at the time, Esho left his mother at the shelter, which was mostly used by families. It was the last time he saw her alive.

In the early hours of February 13, a roar tore through the quiet neighbourhood when two laser-guided bombs slammed down on the concrete and steel structure, piercing the bunker’s roof and incinerating hundreds of civilians beyond recognition, including Eshaq.

“We recognised her because of her bracelet, her red coat and her ring,” said Esho. “I couldn’t believe it. I said, ‘It’s not her, it’s not her’,” he recalled from his home in France.

Eshaq was one of more than 400 Iraqi civilians killed that night, in what became the deadliest incident of civilian casualties caused by the United States in Iraq. Thirty years later, no one has been held accountable for the deaths, and survivors and family members say they have been forgotten by those they hold responsible.

Following the attack, the US defended targeting Amiriyah, claiming the shelter was a military command centre.

“With those, it’s rather difficult to separate out civilians from somebody wearing a uniform,” he said. According to the US, the bunker was constructed as an air raid shelter during the Iran-Iraq war and later converted into a military command and control centre.

“It never occurred to us that it was a place where civilians went to take shelter – we thought of it as a military bunker in which command and control facilities resided,” said McPeak, who was chief of staff of the Air Force during the Gulf War.

“Civilian casualties happened, this was a legitimate military target, it was hit precisely, it was destroyed and put out of business – and there was very little collateral damage,” added McPeak, who puts the number of civilians killed at 250.

McPeak maintains the US took “extraordinary measures” to keep the number of civilian casualties during the Gulf War at a minimum. “We should be getting accolades for this, not apologising for it,” he said.

But Human Rights Watch concluded in a report just months after the attack that allied forces had fallen short “of their duty to utilize means and methods of attack to minimize the likelihood of civilian casualties”.

While Amiriyah residents say some members of the Iraqi intelligence had been seen frequenting the building, families with children had also been going in and out of the bunker for weeks prior to the attack, giving the US-led coalition ample time to identify them as civilians.

When I reached the shelter I heard the screams of the people who wanted to get out. By 10am (that day,) the voices had stopped - no one was screaming.

Fikra Shaker, who lost several family members in the bombing.

Fikra Shaker’s parents, sister and two young nephews hunkered down in the shelter every night for at least two weeks before the bombing. All six were killed on the night of the attack, but only the bodies of Shaker’s father and sister were recovered.

“No one expected to be targeted,” said 65-year-old Shaker sitting in the living room of her family home in Amiriyah. Shaker, then 35 years old, collapsed to the floor when her son, Hussam, told her of the death of her family members. “I knew they had gone [to the shelter] but I kept hoping they would survive.”

Around 7:30am on the day of the attack, Shaker, along with her son and husband, rushed to the shelter only to find flames and chaos. “When I reached the shelter I heard the screams of the people who wanted to get out,” she said. “By 10am the voices had stopped – no one was screaming.”

For years following the attack, then-Iraqi President Saddam Hussein kept the collective memory of the bombing alive in a bid to vilify a country he would continue to be at war with for more than 10 years.

“The gruesome scenes of the charred bodies were on TV the following day and for years,” said Rasha Al Aqeedi of The Center for Global Policy. “On its anniversary, schools stopped regular class and commemorated ‘al Amiriyah shelter day’ with fiery anti-American speech and anthems.”

But the commemorations stopped after the 2003 US invasion of Iraq. And in a country where foreign forces are often seen to operate with impunity, Amiriyah became one in a long list of American attacks on civilians to go unpunished.

In December 2020, former President Donald Trump’s pardon of four American contractors convicted of killing Iraqi civilians in 2007 was met with anger, but no surprise, by the local population.

In 2005, US marines accused of killing more than 20 unarmed men, women and children in Anbar province were not held accountable.

More recently, the gains made against the ISIL (ISIS) armed group by the US-led coalition came at huge civilian cost but little accountability, compounding an already rickety relationship between US forces and Iraqi civilians.

For the survivors and the families of victims of the Amiriyah attack, it has been 30 years without justice.

“First, we need an apology from all the coalition forces who carried out the attack, then the acknowledgement of the crime and then compensation,” Shaker, who lost six family members, said.

I feel (the victims) have been forgotten, no one remembers them. No one knows who they are.

Omar Mahmoud, whose home was damaged in the strike on Amiriyah

Tareq Mandalawi of the Martyrs Foundation, an Iraqi government body, says steps are being taken to issue compensation packages for the families of civilians killed in the 1990s but did not elaborate on whether the victims of the Amiriyah attack would be included.

Beyond the call for remuneration and acknowledgement, the survivors of the bombing say they have been denied the space to mourn their loved ones.

Once a memorial museum with photos of the victims, the blast site was shut down after the 2003 US-led invasion of Iraq. Today the grounds of the shelter house a clinic and government offices, but the bunker remains closed to the public.

Not far from the empty shelter, a sculpture by artist Ala Basheer of a grimacing human face encased in stone and flames is the only visible memorial of the tragic event.

For the first time since 2003, Amiriyah is set to hold a memorial ceremony inside the shelter to mark 30 years since the killing. But for some, it is too little too late for the men, women and children who, Iraqis say, have been overlooked by the state.

“I feel [the victims] have been forgotten, no one remembers them,” said 36-year-old Amiriyah resident Omar Mahmoud, whose home was damaged in the attack. “No one knows who they are.” 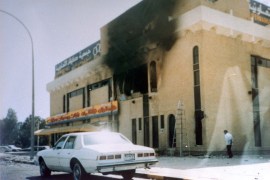 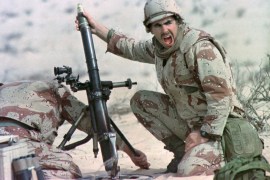 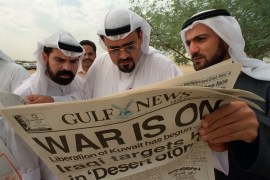 After Desert Storm: Baghdad, and the aftermath (Part 3)

This is the final episode in a three-part series on Operation Desert Storm and the people who lived it. 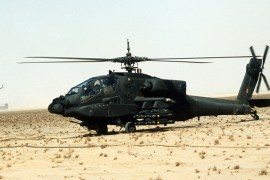 Desert Storm through the eyes of an Iraqi reporter

As Iraq braced for war with the US, Iraqi AP reporter Salah Nasrawi was torn between journalistic duty and patriotism.