By Virginia Pietromarchi and Dear Jeanne

Kampala, Uganda – Long before Uganda’s President Yoweri Museveni announced last month that schools would reopen in January, 15-year-old Florence Nagawa had decided she was not going back.

In March 2020, all educational facilities in the country were shut down due to the coronavirus pandemic. Since then, Nagawa has become pregnant twice and was kicked out of the house she lived in with her grandmother.

She now lives with her two sons in a small house in Kamwokya, an overcrowded and poorly constructed informal settlement in the heart of the capital, Kampala.

“Where do I take the children?” Nagawa said as she peeled beans for her neighbour to earn her less-than-a-dollar daily income. “Who will look after them for me? How will I get the money to feed them if I go back to school?”

Nagawa’s is not an isolated case. The more than 80-week school shut down – the world’s longest – has done “more harm than good”, said the Uganda National Teachers’ Union (UNATU) General Secretary Filbert Baguma.

“Learners are in a worse situation now than what they would have been in a school with a [COVID-19-related] controlled setup,” he added.

According to the National Planning Authority (NPA), up to 30 percent of students are expected to not return to their school desks in January due to teen pregnancy, early marriage and child labour (PDF).

Between March 2020 and June this year, the country reported a 22.5-percent jump in pregnancies among girls aged 10 to 24, data from UNICEF show.

In September, Education Minister Janet Museveni – who is also the country’s first lady – defended her policy to keep schools closed, saying the decision was intended to protect the estimated 15 million students from the threat posed by COVID-19, which has so far killed more than 3,250 people in the country.

Critics argue, however, that while the Delta variant brought a surge in cases in June that prompted a 42-day lockdown, the number of infections that followed did not justify the continued school closures.

For girls like Nagawa, cultural norms and social stigma can make them ashamed of going back to school while pregnant, said Salima Namusobya, the executive director of ISER, an organisation focused on basic education. Parents who are facing economic difficulties due to the pandemic may also decide to invest in the education of their sons, rather than that of daughters who can be forced into marriage.

But even boys are not spared the impact of the school shutdown, with many entering the child labour market to work in mining, street vending and sugarcane planting. Some would like to return to classes, while others are getting used to the idea of earning an income, no matter how small.

“They are already ‘touching’ money so they don’t see the reason to go back to school,” Namusobya said. 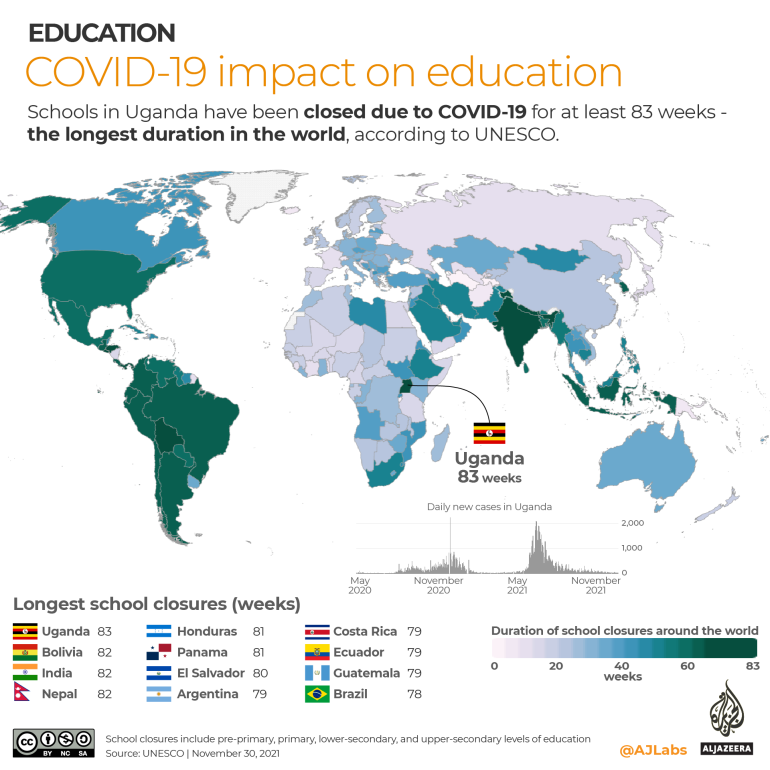 These young earners are not the only ones who feel this way.

Nakityo Teopister, who taught English and social sciences to about 100 students at Saint Kizito Primary school, now fries cassava and pancakes in Mulago, on the outskirts of Kampala. Abandoned by her spouse and left with four children in her care, the 30-year-old decided to rent a shop’s balcony to start a cooking business, 16 months after the closure of schools.

Teacher Nakityo, as customers fondly call her, says she makes more money now than she ever earned as a teacher. “My plan is to grow my business, I am not going back into teaching,” she said.

While the education ministry provided a salary for teachers in shuttered public schools, those in private schools were not supported and, as a result, many left the profession.

“There is no guarantee that all teachers are going to come back,” said Nabendra Dahal, the chief education and adolescent development at UNICEF Uganda.

Some private schools, meanwhile, failed to pay off loans because of the pandemic and have been forced to stay shut or rent out their premises for other activities. In August, the NPA estimated that about 3,507 primary and 832 secondary schools were likely to close due to financial distress.

As questions loom over the government’s ability to mitigate the impact of the continuing closure on students, teachers and schools, the education ministry has released a reopening strategy that includes a surveillance system monitoring COVID-19 cases in schools and a direct line between schools and health services.

The government wants to involve local communities to encourage students and teachers to return to schools. Its plan also envisions funding schools to expand their infrastructure, as well as providing training to help teachers return after the nearly two-year gap.

“They do have a strategy, but not the money,” said Dahal, adding that there is a funding gap of $50m.

For more than a year, the government has also been providing supplementary material for students to continue learning from home, including setting up TV and radio classes. But many students in rural areas either had no access to it or their parents lacked the knowledge to help them with schoolwork. Data from the NPA shows that more than half of students stopped learning with the closure of their schools.

This could lead to the gap between the rich and the poor widening as the most disadvantaged pupils lag behind the learning levels they were at last year, said ISER’s Namusobya.

“Education is one of the things that tries to reduce that gap, and it’s only going to worsen,” she cautioned.

Baguma, the UNATU chief, also warned that the disruptions could carry high economic costs in the future, depriving youth of development opportunities and the country of the chance to forge a skilled middle class.

However, Dahal struck a more optimistic note, noting that, despite the challenges, many actors from the private, public and civil society have partnered with the government to implement the reopening strategy.

“It’s not all doom and gloom,” said Dahal. “We are confident we will make some progress.”