Consisting of four small brick rooms and two tin houses, it is the only school in the area, where at least 1,700 Palestinians from 19 marginalised Bedouin communities live in close proximity of the Israeli army and illegal Israeli settlements.

Built last year, the Wadi al-Maleh school currently serves some 45 students up to the fourth grade.

It is one of 17 Palestinian chain schools at risk of Israeli demolition for lacking a building permit located in Area C, which makes up 60 percent of the occupied West Bank under direct Israeli military and administrative control.

If the demolition goes through, children will be forced to walk long distances to reach the nearest schools located in the villages of Ein al-Beida, Tayasir, and Bardala, at least 15 kilometres away in an area with limited public transportation and overall poor infrastructure.

The schools, scattered across the occupied West Bank, were built by the Palestinian Authority, some with funding from the European Union, to fill the educational gap faced by residents of these areas.

Aisha Mahasneh, an official at the Ministry of Education in Tubas, confirmed to Al Jazeera that the Wadi al-Maleh school was built with EU funding through the Action Against Hunger organisation.

Termed the “Tahadi schools” – meaning “challenge” in Arabic – their construction began in 2016. Several of them are located in Israeli-designated military firing and training zones.

Since the 1970s, Israel has classified some 18 percent of the occupied West Bank, or nearly 30 per cent of Area C, as closed firing zones for its military training, according to the United Nations (UN). At least 6,200 Palestinians live in 38 communities in such designated zones, located mostly in the Jordan Valley and the South Hebron Hills. The communities are considered at risk of forcible transfer, despite many predating their closure.

Residents of these areas live in a state of layered and constant fear, of Israeli settler attacks and of the demolition of their homes and schools. They also regularly face temporary forced displacement from their homes for military exercises and are exposed to stray bullets and unexploded ordnance.

Asmaa Ghanaam, a teacher at the Wadi al-Maleh school, makes her daily journey from the village of Aqaba some 10km away, picking up the other female teachers on her way.

Teaching in a school like this one, she says, is a bit of a personal challenge.

“I can look for a school where it is easier to work, but there’s a special motive for working in this school,” she told Al Jazeera. “After we became acquainted with the students and parents, and saw how they suffer, each of us has a personal motive to help them in confronting all these difficulties that threaten their existence.”

“Working here comes with a taste of challenge and defiance,” added Ghanaam.

Several teachers told Al Jazeera that students often recount the nightmares they have from the sounds of explosions, tanks and helicopters used during Israeli military exercises in the area. They said that the children find difficulty in concentrating, and often try to skip school out of fear of crossing paths with soldiers or settlers.

The majority of the Jordan Valley and Dead Sea area is off-limits to Palestinian residential or community-use and development, as nearly 90 percent of the total area is earmarked for the Israeli military or settlement jurisdiction, according to United Nations Office for the Coordination of Humanitarian Affairs or UN OCHA.

Residents are not granted building permits by the Israeli army, including for homes and basic infrastructure, including schools, roads or water networks, and also face restrictions on access to grazing and agricultural areas.

Some 12,700 Israelis live in illegal settlements across the Jordan Valley, while the majority Palestinian population of at least 60,000 has little control over land and natural resources in the area, rights groups have documented.

During the short period of its existence, the Wadi al-Maleh school has received a demolition order from Israeli forces, as well as three other orders to dismantle parts of it, according to its principal. It is unclear when the Israeli authorities plan to demolish the school.

Late last month, the army dismantled two rooms and removed the school fence. Again, last week, it confiscated the marquee placed to provide students shade from the hot sun of the Jordan Valley.

Principal Jaafar Fuqha explained that the army consistently blocks the expansion of the school.

On October 18, the army issued an order temporarily banning the principal from being present at the school for 10 consecutive days after new structures were installed.

Fuqha told Al Jazeera that he was arrested and detained for five hours by the army, questioned over the building of a new classroom, and threatened with suspension for six months if new structures were built before being released.

“Here, the struggle between us and the [Israeli] occupation revolves around the right to education and the right to survival,” Fuqha told Al Jazeera.

The facility now consists of two classes, 15 m sq each, which can hold up to 20 students per room, he said.

“This school is very important for young students; its absence means that they will have to travel tens of kilometres a day to enrol in distant schools. This is exhausting for young children, and may push some of them to drop out,” Fuqha told Al Jazeera.

“There has been a high drop rate among students in these communities in the past, and we have to prevent this from recurring,” he added.

At least 53 schools, attended by 5,200 Palestinian children, have Israeli demolition orders against them as of February 2021, according to OCHA. “The lack of Israeli-issued building permits is typically cited as the reason, even though, due to the restrictive and discriminatory planning regime, Palestinians can almost never obtain such permits,” they said in a statement.

In a press conference on November 3, representatives from several western diplomatic missions visited the school, where officials from the Palestinian Ministry of Education requested intervention to protect schools at risk of demolition.

“What is happening here is a violation of a basic right,” said Ahmed Sawalah, the ministry’s education director for Tubas governorate, referring to the right to education. “The international community must step in to defend this basic right; a right which every child in the world has.”

Ahmad al-Asaad, the deputy governor of Tubas, described the situation in the northern Jordan Valley as a “conflict between determination and the long-term policy of the Israeli occupier aimed at emptying this land of its residents.”

“We realise that these are hard times and that the challenge is great, but the Palestinian people are resilient and believe in the legitimacy of their cause,” said al-Asaad.

As the children played in the yard of their school, principal Fuqha looked on from afar with a smile, happy to have returned after being banned.

“We must not only stay but also expand, in order to absorb new students in the coming year,” he said. 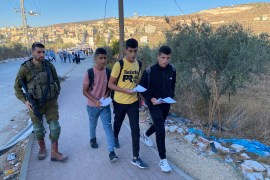 Occupied West Bank: When a walk to school is fraught with fear

For the Palestinian children of Lubban Ash-Sharqiya near Nablus, walking to school is a dangerous journey. 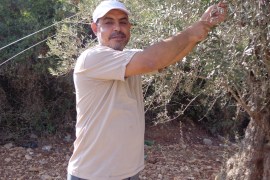 Palestinian farmers are struggling to harvest their olives, losing thousands of dollars due to attacks and restrictions. 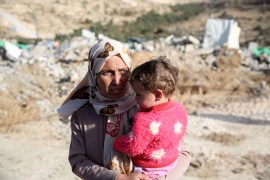