Termed “habbet October” in Arabic – meaning October’s popular outburst – the protests and confrontations came after the Israeli military’s killing and wounding of Palestinians in the 1967-occupied territories at the outbreak of the second Intifada, or uprising.

Amid decades-long, systematic Israeli physical, political and social fragmentation of the Palestinian people, the October protests and the Intifada marked a moment of popular unity between Palestinians in the 1948 and 1967-occupied territories.

Particularly after the 1993 Oslo Accords – which unsuccessfully aimed to create a Palestinian state in the 1967 territories – Palestinians inside Israel were left outside the equation of the Palestinian political project and underwent attempts by the Israeli government to pacify them through funding and over-policing while maintaining their political, social and economic marginalisation.

While several successful Palestinian “popular outbursts” have erupted since 2000 – including among Palestinians inside Israel – the protests and confrontations that swept the country from north to south in May 2021, termed “habbet Ayyar” (May outburst), marked an evident turning point in the relationship between Palestinians and the state, and in popular Palestinian mobilisation, analysts and activists say.

Ameer Makhoul, a Haifa-based political analyst and writer, told Al Jazeera while the protests in 2000 came “to send a message that we are part of the Palestinian people” and were characterised as “support for the struggle of our people” in the 1967-areas, the protests in May 2021 “sent the message that we are one cause – that we are stakeholders in this directly” – explaining they were “not solidarity protests,” but that Palestinians in Israel “were on the frontlines”.

Amid a quickly unfolding chain of events in late April and May – mainly protests against Israeli plans to ethnically cleanse the Palestinian neighbourhood of Sheikh Jarrah in Jerusalem, days of violent Israeli raids and hundreds of injuries at the Al-Aqsa Mosque Compound during Ramadan, and a bombing campaign on the Gaza Strip – the fourth in 13 years – Palestinians inside Israel mobilised, leaving the state with multiple open fronts.

By May 10, thousands emerged in at least 20 Palestinian towns in the 1948-areas, including smaller, lesser-known villages, in protests and confrontations described as “unprecedented.”

In major cities such as Haifa, Lydd and Ramle – towns that were ethnically cleansed in 1948 and are home to a minority Palestinian population today – matters escalated when armed Israelis, many of them hailing from the occupied West Bank, turned into street gangs that attacked Palestinian homes and carried out lynchings, which Makhoul described as “an existential threat to the people”.

On May 12, Israel declared a state of emergency in Lydd for the first time since 1966 and imposed a curfew on the city as the war on Gaza began to unfold. It also brought in reinforcements from the border patrol, a force that usually operates in the occupied West Bank.

According to Mossawa, a Palestinian rights group, police arrested more than 2,150 Palestinians by June 10 – more than 90 percent of whom were Palestinians in Israel or in Jerusalem. Rights groups also documented the use of excessive force including live bullets, rubber-coated metal rounds, tear gas canisters, and stun grenades. Police were also found to torture Palestinian detainees in custody and turned a blind eye to attacks by Jewish gangs on Palestinian residents, in some cases working with them.

Palestinian resident Moussa Hassouna, 32, from Lydd was shot dead by a settler during the events, while 17-year-old Mohammad Kiwan was later killed by police in Umm al-Fahm. Thousands turned up for their funerals.

“What happened this year is that Israel dealt with us as a part of the Palestinian people, in the sense of its aggression towards us,” he continued. “In 2000, it tried to contain us more. Today, it tried to deter us with repression … it considered the last confrontations a warfront.”

Mohamad Kadan, a Palestinian writer based in Haifa, agreed. “Israel was shocked by the shabab (youth) that took to the streets, which showed in the way the police interacted with them,” he told Al Jazeera.

“They (police) were frazzled – it was obvious. In some cases, they ran out of metal shackles, so they brought plastic ones,” said Kadan, adding “Israel’s equation towards them is to terrify and instil fear.”

What also distinguished the May protests from October 2000 was they were people-led, both during the initial protests, and the organising by youth movements that followed.

“The popular decision to act in 2000 came from the political leaders – from the Higher Follow Up Committee – and not the people,” said Makhoul.

Kadan described those who initially took the streets as stemming from the “deep margins”. They hailed “from the poverty belts – the people who don’t see a future here”, he said. “The power and impact of these shabab were very evident – it is the voice that was heard, and it should always be the voice that is heard.”

Mohammad Taher Jabareen, a 29-year-old resident of Umm al-Fahm and one of the founders of the Umm al-Fahm Hirak (movement), told Al Jazeera the youth who took to the streets “had nothing to lose”.

“They needed these protests to take them out of the atmosphere of familial problems, systematic policies against them – including organised crime, house demolitions, land confiscation, financial restrictions, traffic tickets – among other issues, which allowed them to break the fear barrier and take a stand to say ‘enough is enough’,” said Jabareen.

Human rights groups have long documented the struggle of Palestinians in Israel, who number 1.8 million. Aside from Israel’s efforts to suppress their Palestinian identity over the years, the majority live in densely populated towns and with little access to land and resources – most of which was seized from them during and after 1948, for the benefit of Jewish settlers.

Since the Second Intifada, a new phenomenon of organised crime – which residents say Israel is responsible for fuelling – has become the number one problem facing the Palestinians inside Israel, and has taken hundreds of lives and has led to large protests.

The issue that catalyzed people to take to the streets, however, were Israeli attacks on Sheikh Jarrah and the Al-Aqsa Mosque Compound, residents said.

“Organised crime is one of the means through which Israel renders Palestinians in the ’48-areas absent from the political scene,” said Jabareen. “It’s like: ‘Keep each other busy with your problems, and we will be free to act as we please with the Al-Aqsa Mosque and to impose space and time divisions.”

On May 7 – the holiest night of Ramadan – Israeli police attempted to block several large busses on a highway carrying Palestinians from the 1948-areas from reaching the Al-Aqsa Mosque. When the passengers descended and began making their way on foot, Palestinians from Jerusalem went to escort them with their cars to the city, in what was hailed as a victory and moment of cohesion.

Kadan described the Old City and the Al-Aqsa Mosque Compound as “the last fortress of Palestinian nationalism”.

“Sheikh Jarrah represents the past – the uprooting and the Nakba – while Al-Aqsa and the Old City represent what is still possible – that there is still hope for Palestinian liberation,” said Kadan.

Makhoul said the way that “Al-Aqsa and Sheikh Jarrah moved Gaza, which then moved ’48”, showed these are issues for which there is “full popular consensus”.

“Every Palestinian felt they had an individual and personality responsibility towards Sheikh Jarrah and Al-Aqsa,” which Makhoul said also stems from the “weakness of the Palestinian political leadership”.

According to Kadan, many youth movements emerged after the initial confrontations with Israeli police, which later allowed for sustained unity between Palestinians in the ‘48 and the ‘67 areas.

Following the excessive force by Israeli forces and “once the shabab got tired of confrontations, there came to be different forms of struggle,” said Kadan, explaining that “cells for movements grew in every town” made up of youth who are active in universities, political parties and other forums.

“Everyone began organising discussions over what happened in the previous days of intense confrontations, and what can we do going forward,” continued Kadan, noting in addition to previously established movements such as Hirak Haifa and Hirak Umm al-Fahm, new youth movements began to form including in the towns of Shefa ‘Amr, Kabul, Baqa al-Gharbiya, and Kufr Kanna.

Voluntary committees also grew out of the May protests to respond to the local crisis, including a lawyers committee and a psychological support committee to help detainees in the Jerusalem and ’48-areas.

“This generation did not only put forward plans – it started building alternatives. They saw that the political parties and the institutions – the traditional ones like The Higher Follow Up Committee – no longer had a role. They didn’t know what to do,” said Kadan.

On May 17, a youth-organised historic general strike across the ’48 and ’67 areas was declared under the slogan “from the river to the sea”, which Kadan described as a “turning point” for youth mobilisation.

“There was an atmosphere whereby every town and village took upon itself to prepare for the strike – youth started meeting each other, speaking, and organising activities on the day of the strike –  going around the streets to check that the strike is in place, giving out leaflets to people, organising lectures, interventions, seminars,” said Kadan.

Among other initiatives, including a marathon in Jerusalem, youth movements in both the ’48 and ’67 areas simultaneously organised a “Palestine Economic Week” to support Palestinian economic power and boycott Israeli products.

Makhoul said the “power of defiance is increasing day by day,” steered by the role of youth and social media in the May 2021 popular outburst.

“Social media is the new geography,” said Makhoul. “Today, the Palestinian people can act and treat themselves as one people, even if they are not all in their homeland, or if they can’t meet in their homeland.

“What distinguishes us today is that we realised that the world is our playing field first and foremost, and that Israel does not dictate the rules of the game, how we protest and struggle for our cause and people, and how we work towards achieving our peoples’ goals,” he continued.

Makhoul said while Israel “seeks to ruin the culture of resistance in the ’48 areas”, he believes it will “have a bigger problem with the rising generations who don’t pay mind to what Israel says and they are not deterred by it”. 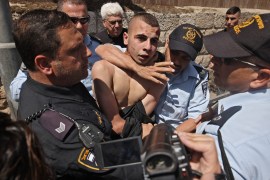 Thousands of Palestinians swept up in Israeli arrest campaign

In May, at least 3,100 people were arrested or detained across Palestinian territories. 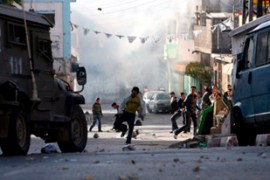 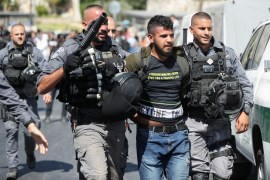