The overpowering stench is the first thing that I notice, filling my nose and making my eyes water. Then I see the mountains of rotting waste. This is Burangkeng, one of Indonesia’s largest landfills, in the city of Bekasi some 30km from the capital, Jakarta.

On the surface it looks like any other large dumpsite, but among the regular rubbish lies a growing amount of toxic medical waste. From blood-filled drip lines to masks, medical gloves and COVID-19 tests. All hidden in plain sight.

As a journalist investigating the impact of the pandemic on Indonesia’s waste system, I have spent a great deal of time reporting from morgues, cemeteries and hospitals, watching how the virus takes tens of thousands of lives and renders others hopeless and isolated.

Every time I go into the field, I feel isolated, too, as I have to separate from my family for fear of spreading the virus. I have come to Burangkeng to find out what happens to COVID-19 waste.

At the entrance, I meet Bagong Suyoto. He is surrounded by heavy trucks full of waste from across Jakarta, waiting to unload.

A man in his early 50s, he knows this site well and visits it regularly. He heads an NGO called National Waste Coalition (KPNas) and for more than two decades has been advocating for better management of waste in Indonesia.

“I did not have an understanding about waste at first, I wasn’t even interested in it. But after I investigated it, I found out that waste is a problem for the environment and for humanity,” he says.

Since the early days of the pandemic, Suyoto has noticed a rapid increase in the amount of untreated medical waste appearing in Jakarta’s landfills. He is going to show me how easy it is to find.

It does not take us long. Just a few metres inside Burangkeng landfill, Suyoto locates intravenous (IV) drip bags and lines scattered among other types of plastic waste. Then he spots COVID-19 rapid tests.

“There are still many in here,” he says. “They look like they have just recently been used and dumped in here.”

According to the United Nations Environment Program (PDF), the rate of medical waste disposal has risen by 500 percent in Jakarta and four other Asian capital cities.

As we sift through used masks with gloved hands and poke bags filled with old medicines, I wonder how this waste came to be here, among household debris.

Suyoto tells me that most of the medical waste he finds is mixed with regular waste inside plastic bags. Because the waste is concealed, it is difficult to track how it enters the landfill, or to trace it back to its source.

Further inside the dump, as we squat on the side of a track watching trucks unload, Suyoto says the medical waste is mixed like this purely for economic purposes.

He explains that it is far cheaper for hospitals and clinics to dump their waste than pay disposal businesses to remove it.

By law, medical waste should be incinerated or sterilised. But the reality is only 4 percent of Indonesia’s 3,000 hospitals have a licence to operate an incinerator.

In July 2021, the Minister of Environment and Forestry Siti Nurbaya acknowledged the growing problem of medical waste. She announced the government would relax some rules for hospitals and clinics that were struggling with increased waste, allowing the operation of some unauthorised incinerators under the ministry’s supervision.

To a man like Suyoto, who has fought to bring the government’s attention to this problem for decades, this response is not enough to stem the growing tide.

“Governments must provide more thermal technology or incinerator technology to destroy medical waste, especially waste related to the COVID pandemic treatment. The government must be serious about it,” he tells me.

To see the source of medical waste first-hand, I visit the University of Indonesia Hospital. As I walk in, lines of people wearing masks stretch past the front door as they wait for treatment. Of the 160 to 170 patients admitted here every day, 80 percent have COVID-19.

I meet Siti Kurnia Astuti, who manages the hospital’s waste. She takes me on a tour of the hospital, showing me how staff in the COVID ward take off their PPE, carefully placing it in marked bags and then in bins, which will be wheeled to the disposal area at the back of the building.

Here, we find workers weighing the medical waste and storing it for collection. Astuti tells me the amount has quadrupled during the pandemic, rising to 10 tonnes each month.

The hospital used to have its own working incinerator to burn this waste, but it broke down. Now, they must pay a company about 70 cents per kilogram to take it away and process it for them.

“So you can imagine how high the cost is that needs to be paid by the hospital, just in waste processing. While, if we process it using our own incinerator, we can save about 50 percent of the cost,” Astuti says.

But she still worries about where it could end up, and says the hospital sometimes follows the trucks that take the waste away, to ensure it is not being dumped.

Back at the Burangkeng landfill, I watch hundreds of waste pickers scavenging through the piles of rubbish, as if looking for treasure. Carrying large bamboo baskets and metal picks, they search for items that can be sold.

IV drip bags and lines are prized products that can be sold for 38 cents per kilogram to unscrupulous recycling plants.

Wilson Pandhika is the secretary-general of Indonesia Plastic Recyclers, an association that represents 120 plastic recycling businesses. He says the industry relies heavily on the informal sector.

He also admits that sourcing plastics from unofficial waste collectors has led to a convoluted supply chain with layers of middlemen.

The scavengers who collect medical waste are also putting themselves at great risk.

Suyoto takes me to meet them at a village near the Burangkeng landfill. Here we find small children running around and playing games while men clean IV drip lines and bottles, stacking them into baskets and bags.

Suyoto picks up some lines with needles still poking off the end and one of the scavengers tells us how he once got pricked by a needle while collecting waste.

“You can get tetanus from it!” Suyoto warns him.

Needle-stick injuries can lead to serious infections while contact with other types of medical waste can result in chemical or radiation burns.

Solutions to the problem

Indonesia’s waste management system is a major concern among environmentalists. The country has more than 400 landfills on almost 9,000 hectares (22,240 acres) of land.

The practice of dumping waste in open landfills without proper management, has created mountains of rubbish as high as 40 metres in another of Jakarta’s landfills – Bantar Gebang. Built in the 1980s, each day it receives an estimated 7,500 tonnes of waste. It is predicted it will reach its capacity in 2021, according to the Regional Development and Planning Agency.

But you don’t have to go to a landfill to clearly see that the country is struggling with the amount of medical waste being generated. Discarded masks on the streets are now a common sight.

I am not the only one taking notice of this. Dr Akbar Hanif Dawam Abdullah, a scientist at the Cibinong Science Centre, did the maths.

I visit Dr Dawam at his lab in Bandung, West Java, some 150km southeast of Jakarta, where he and his team have been working tirelessly to find solutions. When I ask him to explain why he decided to tackle this problem, his eyes light up and he becomes animated.

Dr Dawam has studied bioplastics for five years, and knows that most medical protective equipment contains a plastic called polypropylene that can be recycled.

He shows me the various bits of equipment in his lab as his assistants, wearing goggles, gloves and white coats, demonstrates the method they have perfected to turn masks into plastic pellets.

First, they sterilise the masks using alcohol or bleach, then dry them. The sterilised masks are then melted down at 170 degrees Celsius (338 degrees Fahrenheit).

I watch as the melted plastic comes out of a machine in a long blue sticky line and is fed onto a conveyor before being cut to pieces.

Dr Dawam proudly holds up the results to show me – colourful pellets that can be made into new plastic products, including more protective equipment.

He tells me he is waiting for new regulations to start the implementation of programmes like his, and that some small and medium recycling industries are already interested.

“Some industries know it, but they don’t dare to proceed. The society has shown their enthusiasm in this matter. Some people have even started to sterilise [masks], to wash it, to collect,” he says. “It’s like we are halfway, we just need to continue.”

Adi’s reporting is part of a 101 East investigation supported by the Judith Neilson Institute, in collaboration with The Australian Financial Review, Tirto.id, Thmey Thmey and Cambodianess. 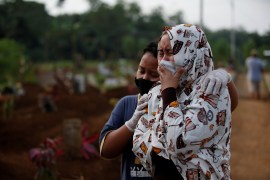 Why has COVID-19 taken hold in Indonesia? 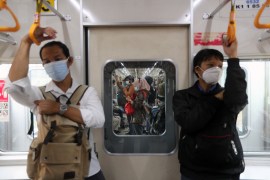 Indonesia quells COVID, but is a new wave on the way?

Experts worry about outbreaks in provinces, as situation in Jakarta, Java and Bali comes under control. 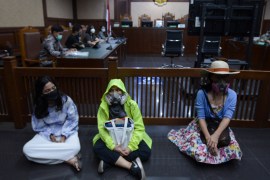 Clean air advocates in Jakarta say court’s decision is a small step towards progress even as officials hint at appeal. 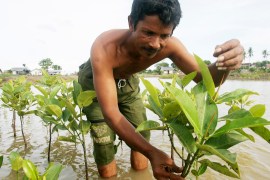 Indonesia’s extensive mangroves could be one of the cheapest ways of reducing carbon emissions, according to scientists.