Rio de Janeiro, Brazil – Consuelo Cesar, 84, had been in stable condition in an ICT unit at the SPA do Alvorada Hospital when the hospital warned that its oxygen stock would run out within minutes.

On Thursday, January 14, as Manaus reported 2,516 new infections and 254 hospitalisations, the highest figure since the onset of the pandemic, Consuelo’s family launched a desperate search for oxygen.

Her niece managed to buy one oxygen cylinder, but it would only last three hours. After the cylinder ran out, Consuela survived on a combination of oxygen donations to the hospital and manual ventilation, until the early hours of Saturday morning.

“It was 48 hours of racing, terror and suffering,” Consuelo’s grandson Rafael Cesar told Al Jazeera over the phone from his family home in Manaus.

When the donations ran out and with no available ventilators, her granddaughter Thais, was called in to perform manual ventilation, due to limited medical staff. After 20 exhausting minutes, just as she could not pump any more, news reached that 10 oxygen cylinders had arrived at the hospital.

“The oxygen was distributed to all patients but it would only have lasted eight hours,” explains Rafael. “Unfortunately, for my grandmother, it was too late”.

Conseula died at 1:10am on Saturday, minutes after the 10 cylinders arrived at the hospital.

Soaring COVID-19 infections, oxygen shortages and an explosion of hospital demands have so far defined the second wave in the Brazilian jungle city of Manaus, which is experiencing a healthcare catastrophe.

The government has yet to disclose the number of deaths since the state’s emergency care units ran out of oxygen last Thursday. A residential doctor at the Getulio Vargas Hospital, who spoke on the condition of anonymity as they were not authorised to speak to the media, told Al Jazeera approximately 100 patients had died from asphyxiation since January 14.

“Due to a collapse in the medical system in Manaus, my family are being transferred to Sao Paulo. Any donation will help with the treatment and recovery of my family,” he wrote in a Facebook post.

Critics blame Brazilian President Jair Bolsonaro’s government for the poor handling of the crisis. According to the Attorney General’s office (AGU), the Ministry of Health was allegedly warned nearly a week before oxygen stock reached critical levels in the city, but failed to inform federal authorities.

Brazil’s health minister, Eduardo Pazuello, who visited Manaus days before the city ran out of oxygen, said outside the Planalto Palace on Monday that “they had done everything that needed to be done”.

Although the Brazilian air force has since responded to the crisis by delivering an emergency stock of liquid and gaseous oxygen, the crisis in Manaus is far from stable.

‘A war every day’

“The government says that the situation is under control but it isn’t … Hospitals are surviving on donations of oxygen and medical equipment. It’s a war every day. Patients of all ages are in critical condition and we can’t do anything,” lamented the front-line doctor from the Getulio Vargas hospital over the phone.

The doctor informed Al Jazeera that due to saturated medical systems, patients who do not have extremely severe symptoms are being treated at home.

Even before the oxygen crisis, infectious disease specialists had been urging authorities to impose some version of a lockdown since August 2020, in order to prevent a repeat of the first wave that led Manaus to dig mass burial graves.

State governors only began to impose restrictive measures on December 26, requesting the closure of commercial establishments for 15 days. But the decision was quickly reversed after protests from workers supported by Bolsonaro erupted across the Amazonan state.

‘The crisis in Manaus should be an alarm for abroad’

“It’s chaos. Seven people died from asphyxiation in Amazonas on Tuesday alone. During the past week, 27 people on average have been dying per day at home due to unavailability of UTI beds,” added Orrellana.

The epidemiologist attributes the end of year events and the possibility of a much more infectious new coronavirus variant as likely causes of the sudden surge, although he says it is too early to confirm.

“What is happening in Manaus with this possible new variant, could happen abroad,” he warned.

Brazil is the second hardest-hit country in the world in terms of COVID-related deaths, with more than 214,000 dead. In the last 24 hours, 1,335 new coronavirus deaths were recorded.

In response to the crisis in Amazonas, the state governor introduced emergency measures last Thursday, including a nighttime curfew and a ban on mass transit.

Orrellena says that the government narrative that Manaus “is without oxygen” obscures the severity of the problem.

“The world thinks that the crisis is due to a lack of oxygen but it’s a lack of everything. A lack of medical equipment, basic sanitary conditions and above all containment measures. We need a lockdown imminently to reduce the transmission of the virus,” he urges.

For Jesem, the work to contain the pandemic and death count needs to be done outside the hospital.

“Inside the hospital, we’ll always lose the war. Oxygen only prolongs the situation. With or without oxygen, people will die,” he adds.

Residents are lost, shocked and afraid.

“I have already lost family who have died at home due to the virus. I feel like I’ve lost my humanity,” Manaus resident Alanna Smith, who is recovering from COVID, told Al Jazeera.

Vania Tanara, a diener at Dr Plantao Araujo morgue, a small hospital in the East zone of Manaus, is concerned.

Tanara believes that oxygen shortages and a much more severe virus are causing the sudden surge.

“Many people are not being attended to, they are dying in the car on the way here. When they arrive, they’re already dead.” 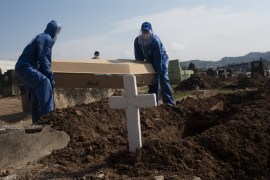 No sign of lockdown in the South American country, which has the second-highest death toll after the US, as cases spike. Healthcare facilities in Amazonas state are being pushed to their limits due to a surge in COVID-19 infections. 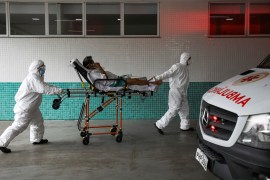