There is something deeply heartening about an extinct native species being reintroduced to its former habitat. In the United Kingdom, there are several of those stories.

The last time storks were recorded breeding in the UK was way back in 1416 on top of a cathedral in Edinburgh. This year, nests on the Knepp Estate in West Sussex produced the first wild-born chicks in 600 years. The parent birds were bred in captivity and released into the wild as part of a reintroduction project started in South East England.

Another project that began 30 years ago in the Chiltern Hills in southern England is also reaping conservation rewards. In 1990, 13 red kites were flown in from Spain as part of a plan to reintroduce the species to the area after its population had all but disappeared across the UK. Today, nearly 2,000 breeding pairs – almost 10 percent of the entire global population – soar above virtually every English county.

And in Kent, there will soon be a more distant beastly association with the British Isles’ wildlife past. Wild bison are set to return for the first time in 6,000 years with the release of a small number planned for 2022. The first of the endangered animals will be brought in from Poland or the Netherlands. 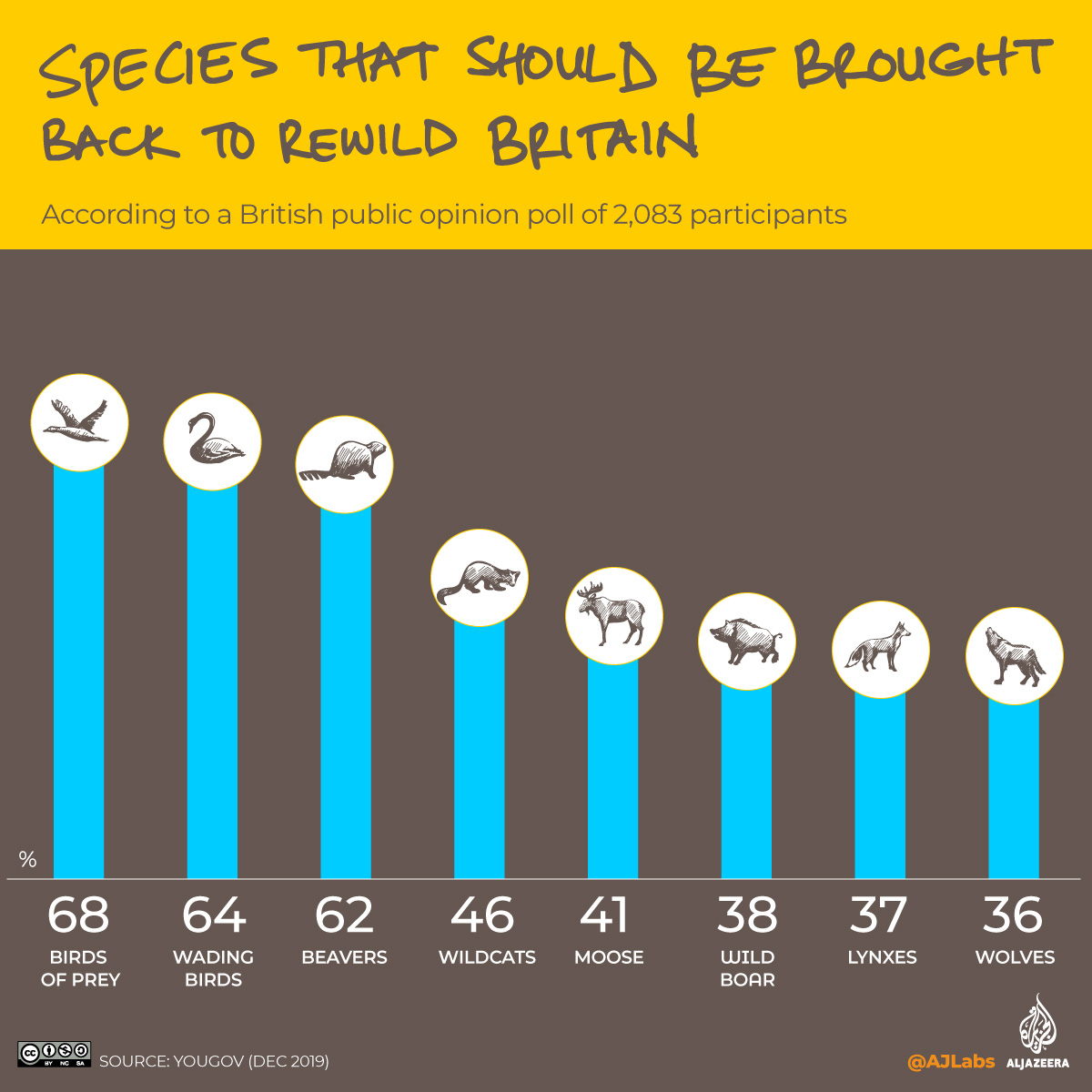 The benefits of beavers

It has been 400 years since beavers lived naturally in the wild in England. Now a group that was discovered in Devon in 2013 has been granted permission to stay after a five-year reintroduction trial showed their dam-building activities were good for wildlife.

It was found that other creatures, including fish, insects, birds and water voles had benefitted from the beavers’ presence and that their dams had reduced the risk of flooding to some human homes.

“This is the most groundbreaking government decision for England’s wildlife for a generation,” Peter Burgess, director of conservation at Wildlife Trust, told Reuters news agency.

“Beavers are nature’s engineers and have the unrivalled ability to breathe new life into our rivers and wetlands.”

There are issues of conflict, especially with farmers concerned about flooding caused by beavers. So efforts are under way to craft an acceptable management approach for an ancient species returning to a very different landscape from the one it used to live in.

The same goes for the possible reintroduction of lynx and wolves. The strategy of returning apex predators clearly has to be very carefully assessed. 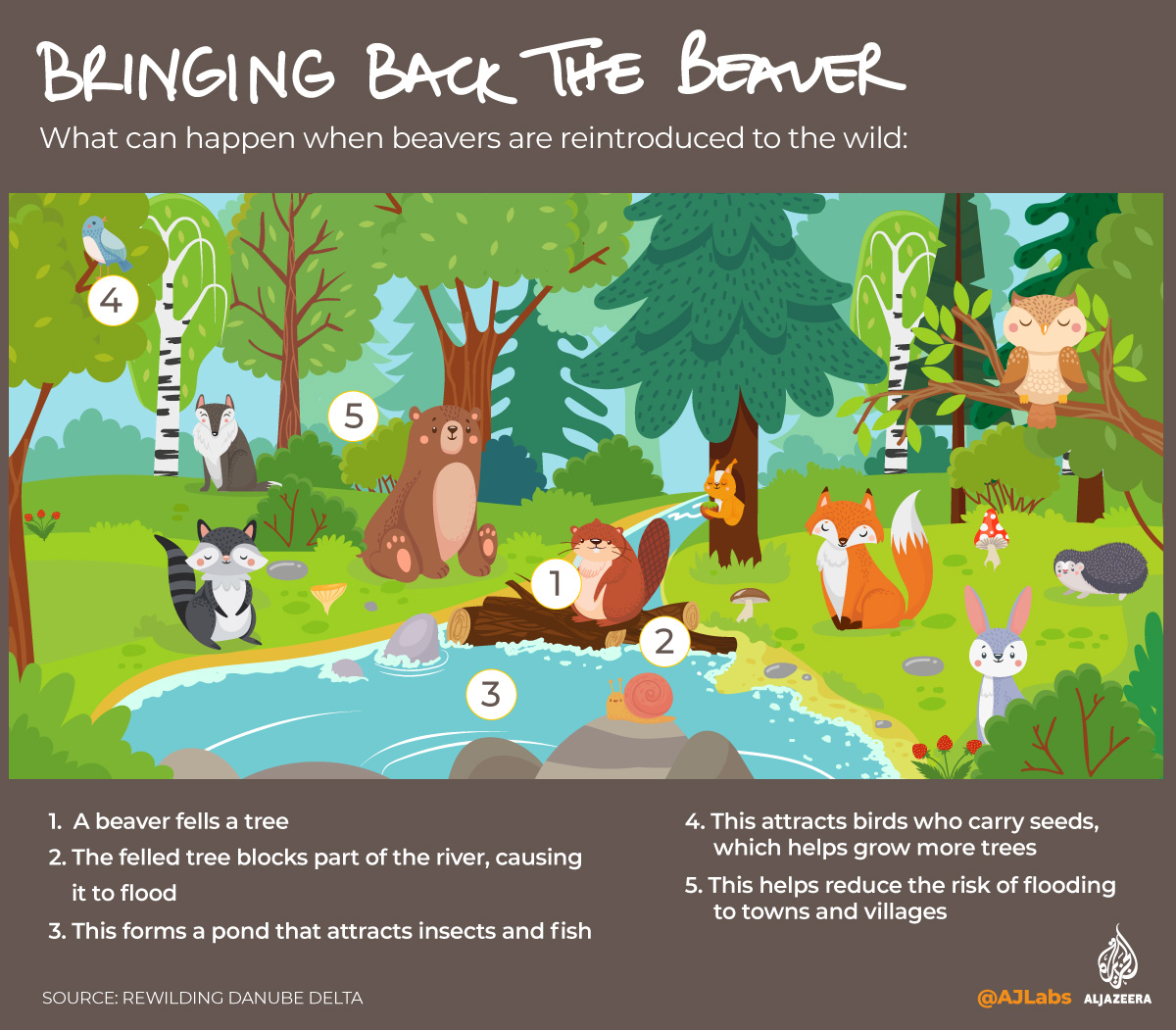 To tackle ongoing climate and environmental catastrophes, there are calls for similar ambitious initiatives to help beef up woodland cover in England. And to do it not by planting trees, but by allowing natural regeneration.

Britain is one of Europe’s least-wooded countries, and environmental charity Rewilding Britain wants woodland cover to double in a decade, which would help absorb 10 percent of UK emissions.

“Our ancient woodlands are only absent because we’ve destroyed them and continue to work hard to prevent their return through over-cutting, over-mowing and over-grazing,” said Rebecca Wrigley, Rewilding Britain’s chief executive.

“If we let them, millions of trees would plant themselves across most of Britain.”

Wrigley cites Norway as an example, where flourishing broadleaved forests in the coastal south – once as deforested and as bare as much of Britain today – demonstrate the potential of natural regeneration.

From bison to birch woods, rewilding as a concept is not about restoring times past, but proactively seeking a solution for a world mired in environmental crisis.

1. Amazon burning: Greenpeace has released dramatic aerial photos showing large-scale fires in the Brazilian Amazon – most of them illegal and set by criminals and land grabbers. This is despite a July government decree that banned fires for 120 days.

2. Trump and the coal promise he could not keep: In 2016, Donald Trump made a promise to save the US coal industry. Despite spending $1bn in taxpayer funds and rolling back environmental rules, coal production is expected to be down 31 percent in 2020.

3. Why is a prominent African climate activist tweeting in German?: Ugandan activist Vanessa Nakate talks about her mission to raise awareness about environmental justice and how she gets her message out, both locally and internationally.

4. How many crocodiles can you see?: One look at this photo of the critically endangered freshwater gharial crocodile and we can see why it was highly commended at this year’s Wildlife Photographer of the Year competition.

by George Monbiot, Feral: Rewilding the Land, the Sea and Human Life