Pence said the US needs four more years of Trump in the White House, and blasted the Democratic nominee for president Joe Biden.

“When you consider their agenda, it’s clear: Joe Biden would be nothing more than a Trojan horse for a radical left,” he claimed. “The choice in this election has never been clearer and the stakes have never been higher.”

He also stuck to the theme of law and order, echoed by most speakers throughout the night.

“Joe Biden says America is systemically racist. And that law enforcement in America has a quote, ‘implicit bias’ against minorities. And when asked whether he’d support cutting funding to law enforcement, and he replied, ‘Yes, absolutely.'”

“The hard truth is … you won’t be safe in Joe Biden’s America.”

On the third night of their convention to nominate Trump for a second four-year term, Republican speakers repeatedly cast the November 3 election against Democratic challenger Joe Biden as a choice of law and order versus lawlessness.

Vice President Mike Pence, whose speech capped the evening, assailed a future US if Biden, the former vice president, should prevail.

“The hard truth is … you won’t be safe in Joe Biden’s America,” he said.

“Under President Trump, we will stand with those who stand on the Thin Blue Line, and we’re not going to defund the police – not now, not ever.”

Speakers highlighted Trump’s work to elevate women – part of an ongoing effort during the convention to present a softer view of Trump that is often belied by his own actions and words.

Trump adviser Kellyanne Conway, who announced earlier this week she would step down at the end of the month, said Trump had put women in powerful positions and given her an influential role.

“A woman in a leadership role can still seem novel. Not so, for President Trump. For decades, he has elevated women to senior positions in business and in government. He confides in and consults us, respects our opinions, and insists that we are on equal footing with the men,” Conway said.

Cawthorn, who is white, claimed national leaders on the left have embraced “radicalised identity politics” that rejects the vision of the Reverend Martin Luther King Jr.

Cawthorn says millions of people risk their lives to come to the US “because they believe in the dream of MLK and the American dream,” and urged people to join the GOP as “the party of freedom” that ensures the American dream for all people.

Lara Trump, Trump’s daughter-in-law, said 4.3 million new jobs had been created for women under his administration – a claim that has quickly been challenged on social media, since it precedes the coronavirus pandemic that left millions of American without work.

This used to be true. Isn't anymore. They're just pretending that the pandemic never happened.

As of July 2020, women had lost more than 3 million jobs under Trump.

Jack Brewer, a former professional football player and a member of Black Voices for Trump said that not liking Trump’s tone was not enough to merit a vote for Democrat Joe Biden.

The US Securities and Exchange Commission accused Brewer this month of illegal insider trading in the stock of a small company that operated a communications network for police. Brewer’s investment advisory firm is registered with the SEC.

A nun who is also a surgeon and retired US army officer said, “Donald Trump is the most pro-life President that this nation has ever had.”

Sister Deirdre “Dede” Byrne of the Little Workers of the Sacred Hearts of Jesus and Mary focused her remarks on abortion.

She says the president’s “belief in the sanctity of life transcends politics.”

White House press secretary Kayleigh McEnany said Trump has supported her “both as a new mom and as an American with a preexisting condition”.

McEnany underwent a preventative mastectomy in 2018 after learning she carried a genetic mutation that enhanced her chances for breast cancer. 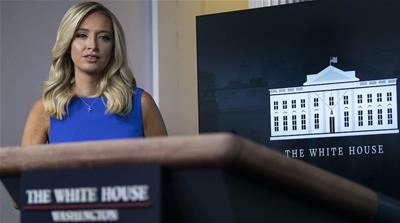 McEnany, who has a 9-month-old child, said, “I want my daughter to grow up in President Donald Trump’s America.”

Karen Pence, who reportedly expressed reservations about her husband’s acceptance of Trump’s running-mate offer, focusing on her work with veterans and military spouses.

“I have had the honour of meeting many heroes across this great country,” she said. “Many of our veteran heroes struggle as they transition back into civilian life,” she added.

“Sometimes, the stress is too difficult to manage alone.”

South Dakota Governor Kristi Noem is echoing many of her fellow Republicans’ dark portrayal of the US under Democratic leadership who have spoken at the Republican National Convention this week.

Noem cast cities governed by Democrats as “being overrun by violent mobs,” as many have before her on the two previous nights of the convention.

Noem did not mention her praise of hydroxychloroquine as a treatment for COVID-19, a position that won her praise from Trump, as did her lifting of the ban on fireworks at Mount Rushmore where she appeared with Trump for an Independence Day weekend rally in July.

The campaign confirmed that Robert Unanue, the president and CEO of Goya Foods, will not be speaking Wednesday night, citing a “logistical problem”.

Unanue’s praise of President Donald Trump at the White House last month sparked a boycott of his company’s products.

Also unclear is the status of a speech by former professional football player Jack Brewer.

Brewer was charged with insider trading by the US Securities and Exchange Commission earlier this month. The campaign did not say definitively whether he will speak.

One of the longest-serving advisers to President Donald Trump, Kellyanne Conway is delivering a speech about “everyday heroes”. But it’s also something of a farewell address as she steps away, she said, to spend more time with her family.

That’s a favourite cloak in Washington for power brokers forced to step down from their jobs. But in Conway’s case, a family crisis has been playing out on Twitter, with her marriage to Trump critic George Conway the object of much fascination inside the Beltway.

“This is completely my choice and my voice,” Kellyanne Conway said in her announcement on Twitter, adding that for the couple’s four children, “it will be less drama and more mama.”

God Bless You All.

Vice President Mike Pence will take centre stage at the Republican National Convention on Wednesday to make the case that Trump will bring the US economy back to its pre-pandemic heights if given four more years in office.

Pence, who will be renominated as Trump’s running mate after on-and-off speculation that he would be dropped from the ticket, is the highest-ranking official to address the four-day convention aside from the president, who has made appearances each day. His speech is expected to highlight the administration’s record, as well as goals for a second term.

First Lady Melania Trump the final speaker on Tuesday night, expressed sympathy for families affected by COVID-19, calling it an “invisible enemy” that had challenged the US but brought its citizens together.

She has “been moved in the way Americans have come together in such an unfamiliar and frightening situation,” and that her husband “will not rest until he has done all he can” to stem the dangers of the coronavirus outbreak.

The first lady spoke from the newly renovated Rose Garden, where her husband was front and centre in the audience gathered to hear her remarks.