By Nick Clark
Correction
Correction: A previous version of this article incorrectly conflated Coastal Redwood trees and Giant Sequoias, which although closely related are different species.

You would think that nothing could survive the devastation wrought by the all-engulfing infernos in California this month. But something has.

While it will mean little to those who have tragically lost their homes, or to the tens of thousands of fire evacuees, an inspiring story of nature’s resilience can perhaps provide solace in times ahead.

It was feared by many that California’s ancient redwood forests were in grave danger. These thousand-year-old trees tower 100 metres (about 330 feet) and more. They are among the tallest living things on Earth. They are also among the hardiest.

Their Latin name is Sequoia Sempervirens, which means “ever-living Sequoia”. Some began their lives more than 2,000 years ago, at a time when Tiberius was emperor of Rome.

Their close relative is the Giant Sequoia – one alive today is estimated to be 3,200 years old. Both species have seen wildfires come and go.

These trees are built to burn. And so far, they have withstood their latest test. 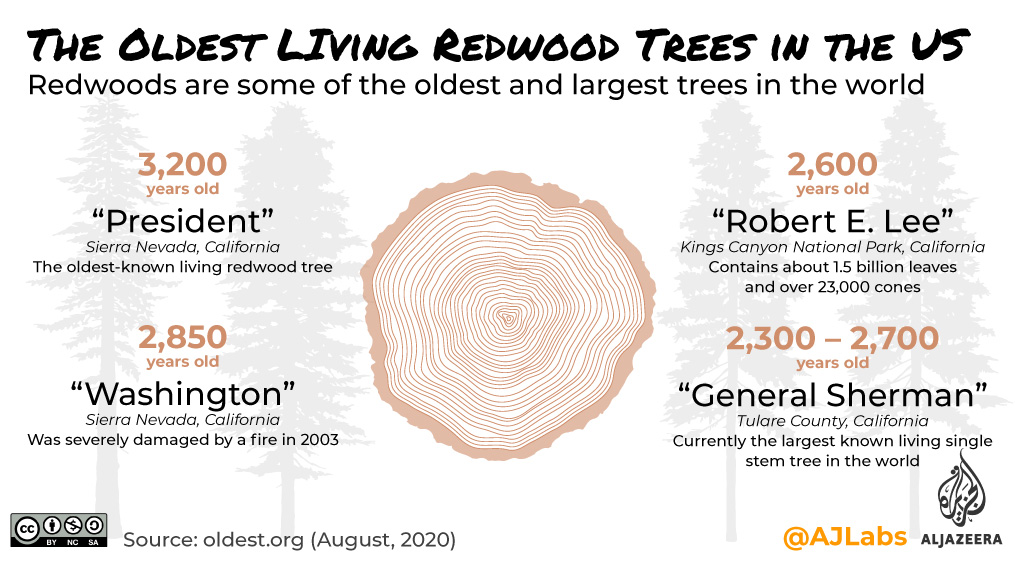 Redwoods have evolved to not only survive forest fires but to thrive on them. The heat opens up seed cones, and as the flames clear the forest floor of deadwood and brush, it deposits nutrient-rich ash for the seedlings to flourish in.

The trees themselves have extra-thick bark to protect them from fire and even though they are blackened and burned, the redwoods caught in recent blazes are nearly all alive.

The Bay Area News Group reported that researchers found 88 percent of Coastal Redwoods had recovered from previous fires in 2008 and 2009. “Some of those trees looked like little charcoal sticks,” said Rachel Lazzeri-Aerts from San Jose State University. “Within a year they sprouted new growth, new needles.”

“None of this looks that bad to me,” Finney said in response. “There’s a lot of scorch in there, but most of these trees are fine. You can see brown foliage on these trees. It doesn’t mean the tree is dead at all. It means the foliage is dead, but the buds underneath the branches and main stem are still alive, and they will probably sprout right back. Most of these trees will do just fine.”

Which is extraordinary, given the intensity of the latest fires.

This remarkable story of nature allows some to say that wildfires today are nothing to do with climate change. But the reality is that a warming world is making a natural phenomenon worse.

Climate change will increase the risk and extent of future fires, conservation biologist Reed Noss told the Bay Area News Group. “These trees are very resilient … They can bounce back. But the resilience is being pushed to the limit with this new climate.”

As renowned climate scientist Michael Mann told American broadcaster PBS: “Climate change is making these events more extreme … You warm the planet, you’re going to get more frequent and intense heatwaves. You warm the soils, you dry them out, you get worse drought. You bring all that together, and those are all the ingredients for unprecedented wildfires.”

The severe weather in California this month is linked to a “heat dome” over the American southwest, according to Yale Climate Connections. The high-pressure dome pulled moisture from the Pacific Ocean, fuelling the rare summer storms that triggered 11,000 lightning strikes. The hot air inside the dome evaporated the moisture before it could fall as rain. But the lightning still came, sparking more than 300 wildfires.

In the forests that burned, the redwoods are pretty much all that is left standing. This time, at least.

1. Ice loss: A high-pressure system over Greenland last summer contributed to the country’s record-breaking loss of ice in 2019, researchers have confirmed – and the worst may be yet to come.

2. Earthworms in the Arctic: Carried northward by humans, scientists worry that earthworms are becoming an invasive species in the Arctic, capable of altering soil and promoting plant growth in traditionally non-fertile regions.

3. Green hydrogen: European countries have thrown their weight behind green hydrogen, a fuel and key industrial material made using renewable energy. The cost is set to drop 64 percent by 2040, which would make it competitive with fossil fuels.

4. Charged up: California is now home to the world’s largest battery storage system, upping the state’s capacity to store solar power amid a sweltering heatwave and recent blackouts.

If you are in denial about climate change, come to California.