Last August, India stripped Kashmir of its special status and imposed a communication blackout cutting off the Muslim-majority region from the outside world, but a young Kashmiri artist has continued to amplify the voices of Kashmiris through his provocative cartoons.

Around the first anniversary of abrogation of Article 370, which granted a measure of autonomy to the Himalayan region of nearly 12 million people, Mir Suhail – a Kashmiri cartoonist based in New York – was preoccupied with thoughts about his native place.

He sketched a cartoon depicting an Indian soldier shooting saffron-coloured bullets at the feet of a Kashmiri man, forcing him to celebrate the August 5 decision by India’s Hindu nationalist government.

There is an air of despondency as last year saw tourism and trade devastated, school and college classes washed out with tens of thousands of troops guarding every corner of Kashmir. The outbreak of coronavirus further added to the economic woes of the people.

“Before there was some hope, that something might work out for our people,” the 31-year-old Kashmiri cartoonist told Al Jazeera from New York City – but after August 5 last year, he said Kashmiris “were in maatam [mourning]”.

As like other artists from the region, Suhail’s provocative and hard-hitting cartoons and illustrations on Indian rule has earned him online accolades, as well as a flurry of abuse.

His large body of work, done both on paper and digitally, includes depicting the torture of Kashmiris by security forces; satirising Indian Prime Minister Modi and other Indian media personalities and lampooning Kashmir’s pro-India leadership.

For over a decade now, his work has been published widely in both Kashmiri and Indian media outlets.

While his animations are praised by fellow Kashmiris, they have received trenchant criticism and abuse online mostly from supporters of India’s Hindu nationalist government.

“Having people insult my mother and sister online is a daily occurrence,” Suhail said.

Some of the most vicious online campaigns against Suhail were in the wake of a sketch he posted satirising Indian media’s portrayal of a July incident in Kashmir’s Sapore district – where security forces killed a civilian while he was travelling with his grandchild.

Images of the three-year-old boy sitting and crying on top of his grandfather’s lifeless body, brought worldwide condemnation, including from the United Nations.

The cartoon mocks the media for only showing its viewers an Indian soldier carrying the kid in his arms to safety while ignoring the dead grandfather, who was caring for the child in the first place.

The cartoon went viral with more than 11,000 likes on Instagram and shared thousands of times on Twitter.

But he was accused of being a “Pakistani” and a ” Muslim fake journalist” among other insults by supporters of the Indian government.

Several of his cartoons in the past 12 months have been censored by Instagram after his posts were reported by online users for alleged inappropriate content.

His sketches at times also landed him into trouble at previous news outlets in Indian-administered Kashmir, where he worked between 2006 and 2016 before moving to India’s capital New Delhi.

His former bosses often expressed discomfort with his depictions of life back home – many times persuading him not to draw on political matters and pick other less-charged topics.

In the wake of Pulwama attacks in February 2019, in which 40 Indian soldiers were killed, his then-editor asked him to remove a cartoon that caused outrage online.

In that cartoon, he had drawn a Kashmiri boy inserting a rose into the gun of an Indian soldier, as the thorns of the flower pierce his body and weapon.

Suhail said he scaled back on his cartoon work concerning Kashmir, and largely stayed off social media – until he had left for the US in December last year.

However, for many Kashmiris, his work is a true representation of the hardships the people in the region face on a daily basis.

“He leaves nothing to the imagination … his honest takes on minute-by-minute events happening in Kashmir, acts of violence that occur on Kashmiri body all ooze out from the images he offers the world, if only the world pays attention,” Zia added.

‘They will build settlements’

India’s revocation of Article 370 has been the main focus of Suhail’s caricatures in the past one year.

In one sketch, he depicts Indian military boots topped with houses marching into Kashmir, in a pool of blood – illustrating the new domicile laws announced in April, which will now allow Indian citizens to buy land in the Muslim-majority region.

“They will start building settlements there soon … they will colonise us just like Palestine,” Suhail said.

Earlier, Indians from other states were not allowed to buy land in Kashmir to safeguard the region’s demography.

Suhail’s sketches also depict the internet blackout across the region, and its subsequent, yet unsatisfactory, restoration in the form of 2G services.

“In today’s world, many people travel and live elsewhere away from their families and friends … communication is very important,” he said, noting this was not the first time internet and telephone services were suspended in the Kashmir Valley.

In 2016, internet services were suspended for more than four months after the killing of popular Kashmiri resistance fighter Burhan Wani.

Suhail, who was living and working for a Kashmiri publication at the time, said the whole experience was “very suffocating”. 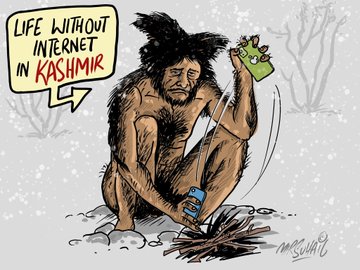 “It felt like someone had cut off your tongue, arms and legs and all you could do was watch what was happening around you without the ability to respond.”

He has particularly highlighted the Indian media’s coverage of Kashmir.

“When I came back to New Delhi on August 11 after my wedding, it was like nothing had happened … people [at work] were acting like normal,” Suhail lamented.

Prime Minister Modi’s decision was well received in India’s journalist circles – with primetime anchors like Arnab Goswami, saying: for “every Indian, there is an overwhelming, unbelievable sense of pride at the integration of Jammu and Kashmir.”

Modi government has said that removal of Kashmir’s special status was meant to integrate the region with the rest of the country and bring development.

“They (the Indian media) did not care to show our (Kashmiris) suffering. I could not stand it any more there.”

In November last year, Suhail decided to resign from his post as senior art director at a New Delhi-based media organisation and a month later moved to New York to join his wife – a recent law graduate.

Suhail said he has been sketching cartoons and illustrations as a teenager.

“Almost every day since I was like maybe 14, I have been drawing cartoons,” he said, noting that his parents had always encouraged his passion.

“My grandfather on my mother’s side was a musician – and so my family has always been supportive of my work, especially my mother,” he added.

Raised in a working-class family in Srinagar, Suhail experienced first-hand the decades-long violence and militarisation of the region.

At the age of eight or nine, Suhail witnessed his childhood friend, a disabled kid, lying dead on the floor – a memory that gives him nightmares today.

“I don’t think there was one day in Kashmir that ever felt peaceful,” Suhail said, recalling the times his mother would come to school crying, forcibly take him out of school and rushing home after a major crackdown in the valley.

“You can just imagine the psychological effect that has on a kid, soldiers with guns everywhere.”

India has deployed more than half a million troops in the region. New Delhi has said that its military is fighting rebels, most of whom want independence or merger with Pakistan.

Pakistan and India both claim Kashmir in full since the partition of the region in 1947 but control parts of it.

Suhail says there is no elaborate thought-process behind his sketches depicting the political upheaval that has come to define the region in the past three decades.

“There is no need for me to imagine, it just flashes in front of my eyes,” he said

“Much of what is happening today, I have seen it all before.”

‘Will always draw for Kashmir’

Since moving to the US, Suhail has been unrelenting in his critique of the Modi-led government.

Now free from any institutional pressure, and working as a freelancer, the cartoonist has pledged to continue drawing his sketches as he deems fit.

“In New York, there is certainly more freedom to do as I please,” he said.

However, Suhail’s increasing popularity through his work means he is unsure when he is likely to go back to Srinagar, saying it is getting less safe for him.

“I feel like that door is closing for me,” he said, adding it was becoming more difficult for Kashmiri journalists to express their opinions on the political situation in the Himalayan region.

During the past few months, at least four local journalists in Kashmir had investigations opened on, detained or arrested, according to the Committee to Protect Journalists.

Qazi Shibli, a journalist based in Srinagar was detained in July 2019, and later arrested for nine months by Indian security forces without trial, for his tweets.

Photojournalist and Srinagar resident Masrat Zahra was detained in April by police under anti-terror laws for posting a photo online of a Kashmiri protester with a banner displaying the now-deceased fighter Wani.

“No matter where I live in the world, I will always draw for Kashmir. That is my place.”