While seriously enhancing China’s ability to project combat power beyond its own coastline, they are also being used to train cadres of naval officers and pilots in the complex business of efficiently running aircraft carrier groups.

Rapidly developing this body of expertise is no easy feat but President Xi Jinping has big plans. Apart from the two already in service, two more aircraft carriers are being designed and built. Larger and able to carry more aircraft, they will have the means to launch heavier planes and to see and attack targets further away.

These “big ticket” defence items draw the bulk of Western attention and serve to boost a sense of Chinese national might but equally important, and often missed, is the development of the PLA Navy’s amphibious capabilities.

China’s marine corps is being increased from 20,000 to 100,000 troops and personnel are being trained for a variety of missions. Meanwhile, new large amphibious assault ships will protect marines when landing on hostile shores, and provide a mobile command centre for coordination and support, a vital component in any expeditionary force. 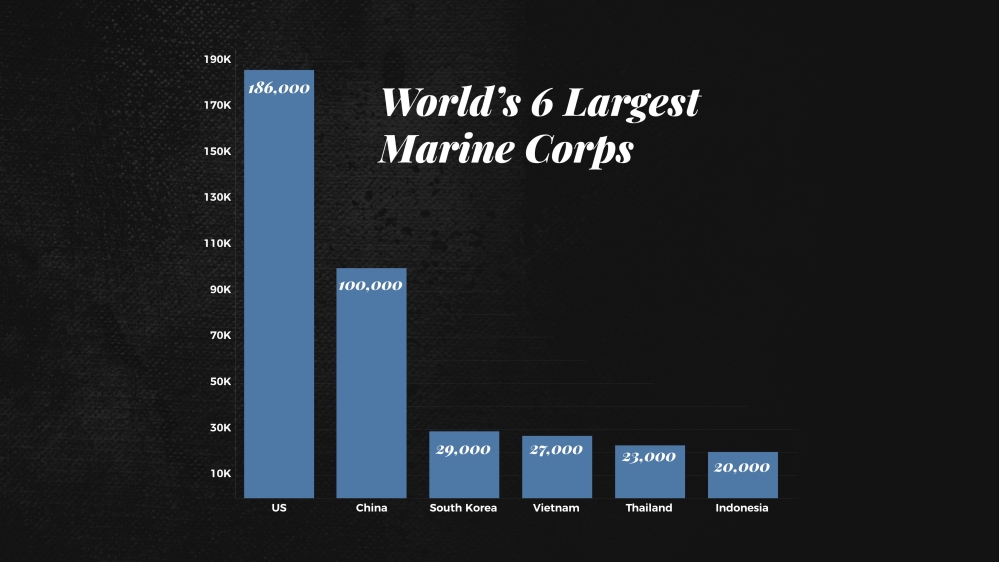 As China expands its economic influence on other continents, it wants soldiers able to project combat power and protect its interests. The marines will be that force – well-equipped and gaining operational experience as they deploy overseas.

China, like many countries, wants to protect its interests and ensure that no other country has a stranglehold on its trade routes. As its economy has expanded, so too has its determination to protect vital sea lanes and Chinese investments overseas. But what has China’s neighbours worried is the rapidity of its encroachment into other spheres of influence, both regional and beyond. So, what is going on?

China’s latest White Paper on its defence spending, published in July 2019, specifically states that the “distinctive feature” of the country’s national defence is: “Never seeking hegemony, expansion or spheres of influence.” But the difference between achieving hegemony and safeguarding one’s interests can be all too slim.

While the PLA Navy is focused on more overt military threats, China uses its maritime militia and coastguard to impose its will in territories where it is competing with other countries for dominance.

Both are now under direct military control. The coastguard is the biggest in the world and its new ships have been fitted with ramming gear and high-pressure water hoses.

The maritime militia operates fishing boats and oil tankers, which seem outwardly civilian, but are used to intimidate and harass the vessels of China’s neighbours in order to control strategically and economically important areas like the South China Sea.

China’s coastguard and maritime militia are being used to take over tasks that the PLA Navy once performed, leaving the navy to focus on what it calls “far seas protection”, maintaining and increasing its presence in the Red Sea and off the Strait of Hormuz.

China’s navy has rapidly gone from being a coastal defence force protecting its shores to a large group of integrated fleets capable of reaching further out as China becomes a global military power. China’s joint naval drills are another sign of this expanding influence. In late December, it took part in joint naval exercises with South Africa and Russia off the Cape of Good Hope and in 2020 it will conduct joint exercises with Pakistan’s navy in the north Arabian Sea.

A third way that China has projected power and control is through the creation of dredged islands in the South China Sea. What were initially islets and atolls are now increasingly heavily-defended air and naval bases. Large runways have been built on several of these new islands, able to take fighter jets and large wide-body aircraft such as bombers and long-range transport planes. Missile batteries have been installed, aircraft hangers, barracks, training grounds and radar sites have all been built as China makes it very clear to the world that its presence there is permanent and growing.

These bases, deep in the South China Sea, have China’s neighbours worried. Vietnam and the Philippines have been especially vocal, the latter less so since President Rodrigo Duterte was elected in 2016.

His pro-China stance has since been tempered by domestic criticism over his tepid response to Chinese naval and fishing vessels swarming fishing grounds traditionally claimed by the Philippines. Last year, he quipped: “When Xi says I will fish, who can prevent him?”

Duterte’s fatalistic attitude is not shared by China’s other neighbours. Japan has already overturned decades of deliberate pacifism and has begun rearming, boosting its military-industrial complex with foreign arms sales and buying high-end items such as the US F-35 and Aegis Ashore missile defence batteries.

India, one of the most formidable military powers in the region and very aware of China’s influence in the Indian Ocean, has long been working to boost its own naval power. Its first domestically-made aircraft carrier, the INS Vikrant, is currently under construction. However, India is hampered by labyrinthian procurement procedures set up in the wake of corruption scandals, budgetary constraints, and by the government’s insistence that naval vessels and arms be manufactured locally.

All these issues act as a dragnet on its ability to militarily challenge China, who India now sees as its number one competitor in the region. India has attempted to make up for these shortcomings by boosting defence ties with countries as far away as France and Chile while setting up listening posts and bases at strategic points in the Indian Ocean.

Across the region, China’s neighbours have been boosting their diplomatic initiatives to the United States, the only country that can seriously challenge the Asian superpower.

Vietnam, a communist power, has strengthened bilateral ties with its former enemy, the US, allowing US ships access to Cam Ranh Bay naval base in northern Vietnam. It has worked tirelessly to boost bilateral defence ties with Russia, India and other regional powers and is on a crash course to modernise its navy.

Further afield, Australia has boosted its presence of US marines in the north of the country and is planning the expansion of its harbour and base facilities in Darwin to accommodate a markedly increased US naval presence in the near future.

Over the last decade, in the Indian Ocean, China has built the Pakistani port at Gwadar, just beyond the Strait of Hormuz. It revamped the port at Chittagong in Bangladesh and modernised and massively upgraded the southern Sri Lankan port of Hambantota, giving them an enhanced ability to berth and support large naval vessels. This use of industry and logistical might to boost Chinese maritime trade brings with it the implied backing of military power as China seeks to protect its substantial investments in the region.

This new, and at times coercive, power is most clearly seen in the South China Sea. As Jon Grevatt, an Asia-Pacific defence industry analyst at Jane’s by IHS Markit, told Al Jazeera English last July: “In areas like the South China Sea, where China’s military power has grown to such an extent (and rate) that its deterrence has also grown, (this) … means that the chances of military engagement have decreased.”

While this is true, it is very much under the auspices of an increasingly potent “Pax Sinica” – or, peace on Chinese terms.

The increased US naval presence in the Indo-Pacific region, public shows of diplomatic support from the US, and spiking arms sales over the last few years show that not all of China’s neighbours are comfortable with this new reality.