The curve has been all the rage of late, especially flattening it.

Do a quick Google search and you will find no end to boldly named mathematical curves – from the flamboyantly coined Cissoid of Diocles to the more simply put but no less impenetrable Devil’s Curve.

If you want to know more about them, you have come to the wrong place. This is about a good old basic curve which charts a couple of variables, such as the daily number of COVID-19 cases against the time since the first case emerged.

The flatter the curve, the more manageable it is.

While the world focuses on the coronavirus, there is another form of this simple curve that we desperately need to flatten; but it is soaring like a Trumpian rocketship. The Keeling Curve is a graph showing the accumulation of carbon dioxide (CO2) in the Earth’s atmosphere.

Yes, there we all were drinking in the reportedly cleaner air and clearer skies that the recent lockdowns have enabled, when CO2 goes and ruins everything.

It turns out that shutting down the world’s economy and air routes have not been enough to lower global emissions. 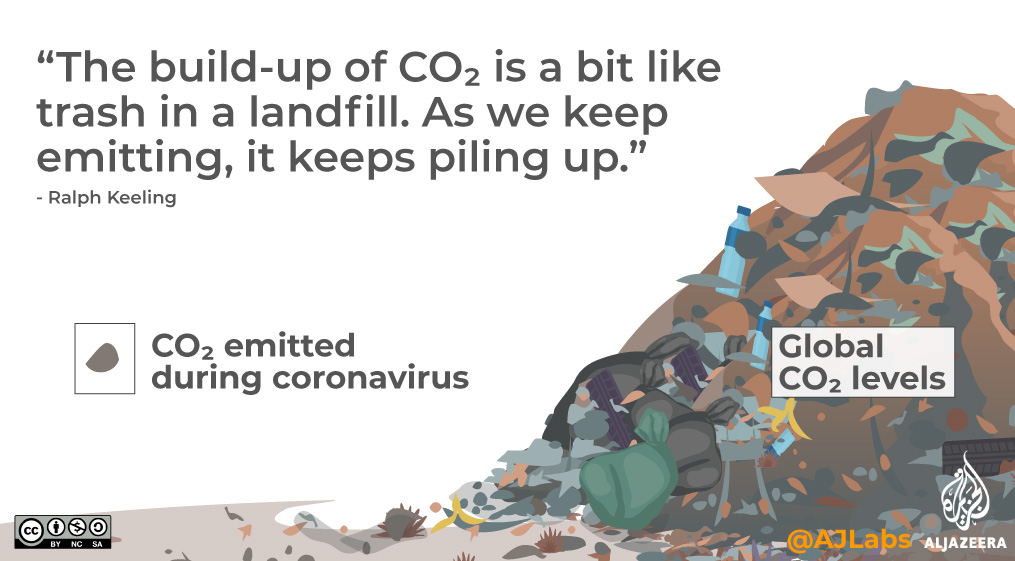 Despite the brief environmental respite, CO2 levels hit a new record in May.

According to the Scripps Institution of Oceanography, atmospheric carbon dioxide reached more than 417 parts per million (ppm), the highest monthly level ever recorded in human history, the highest in fact for millions of years.

“People might be surprised to hear that the response to the coronavirus outbreak has not done more to influence CO2 levels,” said Professor Ralph Keeling, the head of the Scripps CO2 programme.

“The build-up of CO2 is a bit like trash in a landfill. As we keep emitting, it keeps piling up.”

The Keeling Curve is named not after Ralph but after his late father, Dave.

In March 1958, Charles David Keeling, continuing on initial findings he had made in 1953, began taking readings in the clear air atop the Mauna Loa volcano in Hawaii. The first measurements produced readings of around 313 ppm, which have increased every year since.

Keeling’s startling discovery brought the Earth’s living systems into sharp focus. It was realised that as CO2 levels increased, global temperatures were rising in tandem.

This led to another iconic climate graph – the so-called hockey-stick curve, first published by Michael Mann and colleagues at Penn State University in 1998 (PDF).

This showed the relatively stable global temperatures over the last thousand years and the sudden upward trend which began at the time of the industrial revolution. Of course, it is still climbing today.

Ralph Keeling continues his father’s work on the mountain. “It established as a fact that humans were impacting the planet on a global scale,” he said.

“The core problem is the burning of fossil fuels. It is not as if we are starting to curtail – it’s like you’ve got a weight problem and you try and deal with it by eating more and more.”

Professor Keeling said what has changed is that people are starting to feel the weirdness of the climate around them in terms of freak weather patterns and crop failures.

“It’s starting to creep into people’s lives,” he said. “I think it’s going to get a bit rough, to be honest, and I don’t see how we get around this without serious consequences.” 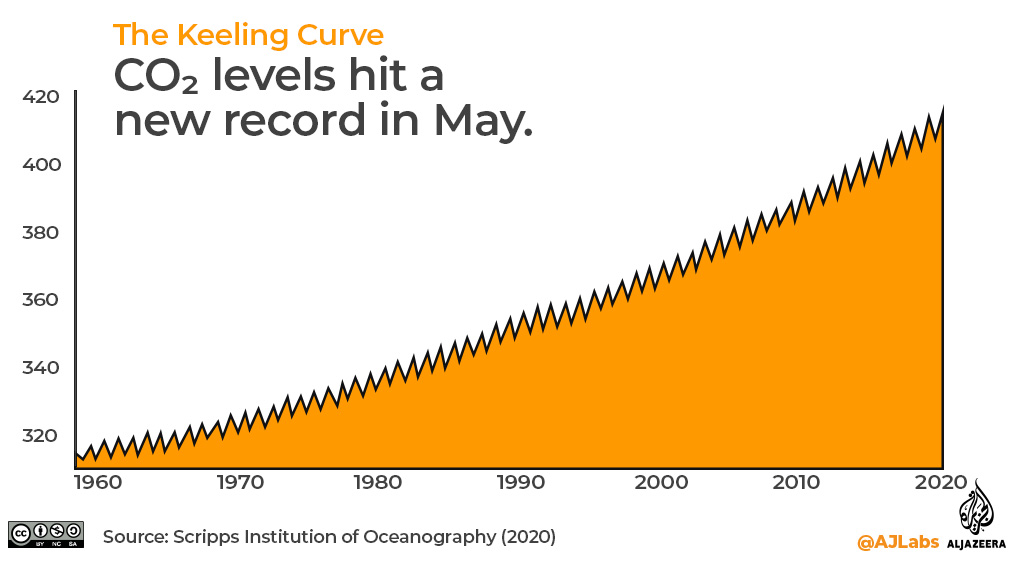 To prove the point, on average last month was the warmest May on record around the world.

The natural world is screaming out the danger we are in. If COVID-19 is the fire drill, can you imagine the consequences of the real inferno?

As we invest in post-COVID recovery, why not do what any self-respecting graph would do: flatten the climate curve.

1. Senegal’s critical decision on oceans: In an environmental victory for artisanal fishermen, the country’s minister of fisheries rejected the licensing requests for 52 foreign industrial fishing boats to allow stocks to recover.

3. Pangolin protection in China: Animal protection groups have praised a move by China to remove Pangolin scales from its list of ingredients approved for use in traditional medicine. Campaigners hope it will help end global trade in the anteater.

4. Germany’s ‘green’ stimulus plan: Acting on calls for climate-friendly initiatives, more than 30 percent of the country’s $145bn recovery package has been bookmarked for sectors that will help lower emissions.

5. Trump opens sanctuary to commercial fishing: The US president has opened up a 5,000 square mile conservation area in the Atlantic Ocean, that was protected by Barack Obama in 2016, to commercial fishing. “We’re cutting regulations from highways and roadways to fish,” Trump said.

Change is the law of life. And those who look only to the past or present are certain to miss the future.