London, United Kingdom – In 2001, foot-and-mouth disease tore through the United Kingdom, from Scotland to Cornwall, devastating British industries and costing the country billions of pounds.

In the eyes of some Britons, certain sections of the media and reportedly the government, it was the Chinese who were to blame.

The outbreak almost 20 years ago led to the slaughter of millions of farm animals and the loss of livelihoods for many in the agricultural sector.

The exact origin of the 2001 foot-and-mouth outbreak remains unclear to this day, but there is certainly no consensus that the epidemic was caused by the actions of Chinese businesses in the UK.

An abattoir in Essex, southern England, reported the first cases among pigs, but the infection was believed to have been brought there from a farm in Northumberland, in the north, where pigs had been infected for some time before.

People weren't coming in as customers but coming in to play football and, while they're doing that, shouting racist abuse.

On March 27, 2001, UK media said the government was investigating reports that illegally imported meat served in Chinese restaurants was the likely source of the disease – prompting condemnation from Chinese catering associations.

Verbal and physical abuse was rising in the streets, and at Chinese restaurants and takeaways.

“I received many calls about incidents where people weren’t coming in as customers but coming in to play football and, while they’re doing that, shouting racist abuse,” Lam told Al Jazeera. “Plenty of criminal damage. People throwing glass at the shop front. There were incidents of graffiti.”

Chinese restaurants across the country reported a 40 percent downturn in trade, with some businesses not receiving a single customer after the rumour broke.

“Because of the rumour, the business just went downhill very, very quickly,” Clint Woo, who owned a restaurant called China City on Stowell Street in Newcastle, where the city’s Chinatown had sprung up, told Al Jazeera.

“Not just my restaurant but the whole street.”

With the spread of foot-and-mouth traced to a farm seven miles (11km) away in Heddon-on-the-Wall, Northumberland, the glare was fixed firmly on Stowell Street’s restaurants, which supplied farmers with pigswill – kitchen refuse which is fed to pigs.

The allegation, which was attributed to an official at the now-defunct Ministry of Agriculture, Fisheries and Food (MAFF), stoked fear and anger.

Despite the lack of proof and as the government was yet to officially confirm or deny the claim, the press continued to run with the rumour.

“Maybe the meal you last bought on an evening out was sub-standard or even diseased,” a column in the newspaper read.

The result, as Lam recalled, was that “racial attacks and abuse increased”.

According to Sarah Yeh, founder of Dimsum, a website aimed at British-Chinese people, this level of bullying galvanised a community that was otherwise hesitant to engage in activism.

“It was so obviously wrong and unjust,” she remembered.

“The perception was very much that Chinese people kept their heads down and got on with work, and that’s not something I felt was a particularly good thing because we were still being subjected to racism,” she said. 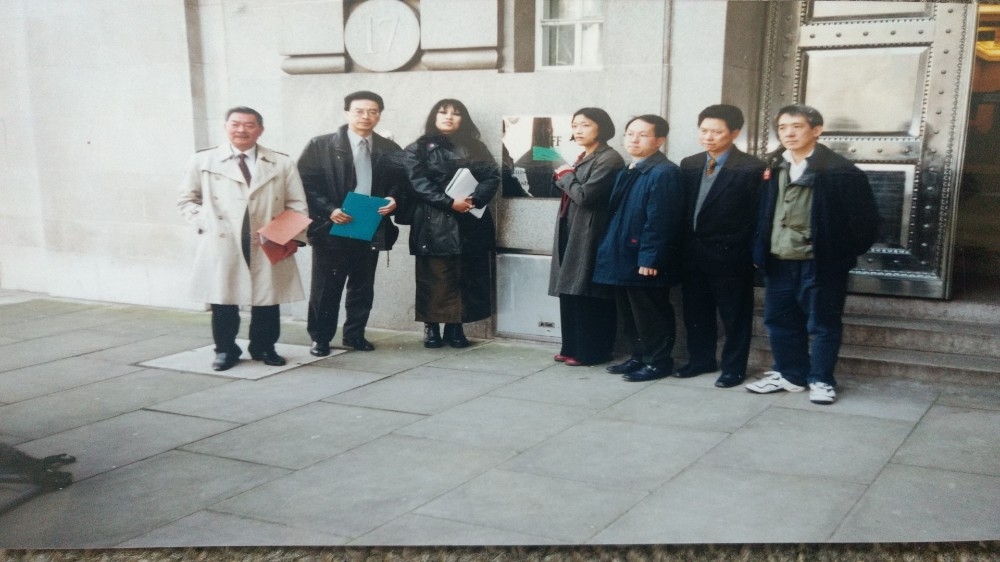 Lam, members of Dimsum and various Chinese community groups, such as the London Chinatown Association, formed the Chinese Civil Rights Action Group (CCRAG) and set out to refute the unfounded allegation.

Communication would need to play a key role.

The Dimsum website informed the community about the campaign and publicised the call to action that would garner the most attention – a protest on April 8, 2001 from London’s Chinatown to Westminster and MAFF headquarters.

The march attracted around 1,000 people, an unusually high turnout for the British-Chinese community.

Yeh said protesters ranged from students to catering workers, immigrants to British-born Chinese, and the young and old.

“It was the first for so many people. So many Chinese people had connected together of different ages and different generations, and it was really very inspiring.”

At MAFF, they held a meeting with minister Nicholas Brown, of the then ruling Labour Party, who came out to directly address the protesters.

He told the crowd it was “untrue” that the government had tracked the source of foot-and-mouth to Chinese restaurants and criticised the “racist overtones” found in media reports.

The community had been vindicated.

Alongside other Chinese business owners in Newcastle, Clint Woo had set up the Chinatown Traders’ Action Group and managed to secure £20,000 ($25,000) of compensation for the group from the government.

“For a street of businesses, that’s really not much,” said Woo. “You can argue that the whole street never recovered.”

The sum also did not cover anywhere near the £24m ($30m) loss to the Chinese catering industry nationally, as estimated by the CCRAG.

In September that year – seven months after the first case of the epidemic – the outbreak was mostly over.

Today, in addition to the fear of contracting COVID-19, the Chinese diaspora – as well as those of East and Southeast Asian origin – are contending with virus-related racism again.

Weeks before the UK went into lockdown, Chinese restaurants across the nation reported a drop in trade of up to 75 percent amid growing reports of racist incidents and online abuse.

Despite this, Lam, the equality campaigner, is optimistic.

“The younger generation of Chinese are more forthcoming in expressing their views and a lot of organisations are coming up to serve the different sectors of the communities,” he said.

“Also, there is a readiness of joint collaboration with other communities, whether it’s BAME, the mainstream or disadvantaged groups. They are joining in social movements, in commenting on community affairs, in participation. I think it’s more hopeful.”