It is a story as old as the hills of the Mau Forest in Kenya where it all begins, a process of nature that supports a network of ecosystems. The rain falls – and down it gently percolates into the waterways and aquifers which form the Mara River Basin, home to the Masai Mara Game Reserve and the northern edge of the Serengeti National Park.

The Mau Forest is a natural water tower, living, breathing, growing, and pulsating with life, as it sustains millions of animals and people living on the plains below.

But in some places, deforestation has stripped those old hills bare. Suddenly when the rain falls there is nothing to stop it cascading down with devastating consequences.

The rainy season in Kenya this year is wreaking more havoc than ever. Flash floods and landslides have killed nearly 200 people, displacing thousands, their livestock dead and crops destroyed.

And as climate change brings more intense rainfall, this is being repeated across the world. Yet still, the virgin forest is being ripped out.

Now illegal logging is being enabled and exacerbated by the coronavirus pandemic. I have spoken to several NGOs who are urgently flagging this.

The door of criminal opportunity is ajar because social distancing restrictions mean fewer patrols are policing the forests of the world preventing logging crime.

WWF tells me the lockdown has diverted attention from law enforcement and there is evidence of the growth in illegal activities from the Greater Mekong to Madagascar.

In Brazil, the government under Jair Bolsonaro has eased inspections and monitoring of forests. Deforestation in the Amazon in the first three months of 2020 was already up by 51 percent.

Indeed, just-released data from the Brazilian space institute INPE shows that despite the coronavirus crisis, cattle, animal feed and logging interests have accelerated deforestation in the Brazilian Amazon to the highest level in more than a decade.

Eric Karipuna, leader of the Karipuna people in Brazil, told Greenpeace researchers that more loggers had been clearing forest on their land since the beginning of the pandemic quarantine.

In the Colombian Amazon, a record number of fires were recorded in March and the government has cited increased land grabbing as the main cause, again resulting from weaker enforcement due to the focus on COVID-19. WWF said several of these fires were in the Chiribiquete National Natural Park, the world’s largest tropical rainforest national park which was recognised as a World Heritage Site in 2018.

In Madagascar, there are reports of an increase in the harvesting of mangroves for charcoal production. Across the world, people are being forced to look for alternative ways to meet their most basic needs for food and fuel, as restrictions leave traditional farming and fishing communities with no other choice than to exploit forests, mangroves and reefs. 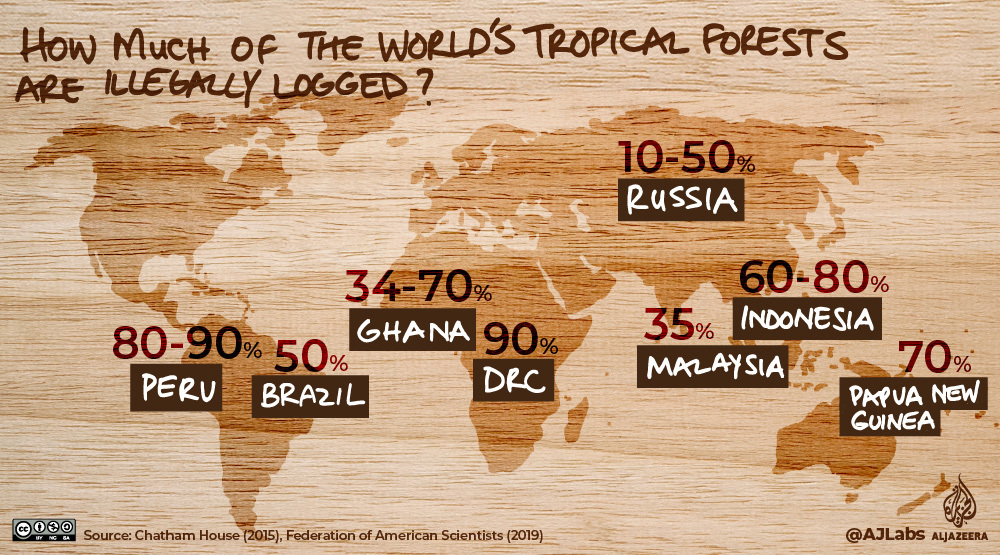 And deforestation is the very thing that threatens us with more zoonotic (animal-to-human) diseases like Covid-19, as habitats decrease and wildlife comes into ever closer contact with us.

“If we don’t stop deforestation, the health goal of ending wildlife trafficking cannot be achieved. It’d be like running only half the marathon and then sitting down.”

Mighty Earth has documented how many of the world’s worst polluting companies have used the crisis as an excuse to extract tens of billions of dollars in new government subsidies.

And that, it says, includes the meat industry, one of the biggest beneficiaries of subsidies in recent years, even as it pollutes America’s waterways and continues to drive large-scale deforestation for cattle and animal feed in South America.

Indirectly it seems, COVID-19 is just as able to target our forests, the so-called lungs of the world, as the hundreds of thousands of people who have fallen victim to this awful respiratory illness.

The good news is, somewhere up in the hills of the Mau Forest, you will find the natural order of things, where a thriving forest sustains a multitude of life. For now.

1. COVID-19: Investment firms controlling trillions of dollars in assets globally have joined the International Monetary Fund in calling on the world’s top economies to commit to green recovery plans.

2. Russia on fire: On the heels of its hottest winter ever, Earther details the five million or so acres in Siberia that are currently ablaze, made worse by difficulties associated with the COVID-19 lockdown.

3. Bike tracks and walkways: How cities like Milan, Paris and Bogota are shaping their green recovery from coronavirus.

4. To travel or stay at home?: A thought-provoking piece on not getting back on the plane.

5. Brown bears: One has been spotted in north-west Spain for the first time since the 19th century.

I just wish the world was twice as big and half of it was still unexplored.