Sao Paulo, Brazil – Haunted by Brazil’s macabre history of Indigenous genocide and death by preventable disease, Ianukula Kaiabi Suia, president of the Xingu Indigenous Land Association, has called on his village to obey strict lockdown measures during the coronavirus pandemic.

“We know that historically, a large part of Brazil’s Indigenous population was wiped out by diseases like common flu,” Suia said.

Nearly 60 years ago, before Ianukula was born, hundreds of Indigenous in the upper Xingu region, where savannah meets Amazon forest, were killed by a measles outbreak after contact with non-Indigenous explorers and settlers.

Today, the vast 26,000 square-kilometre Xingu Indigenous Park, founded in 1961 with help from Indigenous icons, the Villas-Boas brothers, is home to 6,000 Indigenous people of 16 different groups.

Fearing the new disease could “decimate” communities, he and other local leaders have cancelled advocacy meetings, restricted movement between villages and the city, and blocked roads, he said.

Other tribal leaders across Brazil have followed suit. For them, the pandemic comes at an especially difficult time, amid growing land attacks from illegal miners, loggers and land grabbers and weakened institutional protections under far-right President Jair Bolsonaro.

“We’re in a moment of extreme fragility,” she said.

According to data by Brazil’s Social Environmental Institute (ISA) updated on Friday, there have been at least three COVID-19 deaths of Indigenous people living in far-flung regions with at least 27 confirmed cases.

Fifteen-year-old Yanomami youth Alvanei Xirixana became the youngest Indigenous coronavirus victim to die earlier this month in a hospital in the Amazonian state of Roraima.

The Yanomami land is Brazil’s largest Indigenous reserve at 96,000 square kilometres, roughly twice the size of Switzerland, which straddles the border with Venezuela and is home to roughly 25,000 Indigenous people.

Long targeted by illegal gold miners, like many of Brazil’s reserves in recent years, falling environmental protections and rising gold prices have seen invasions spike again and currently it is overrun by some 20,000 prospectors, according to ISA. 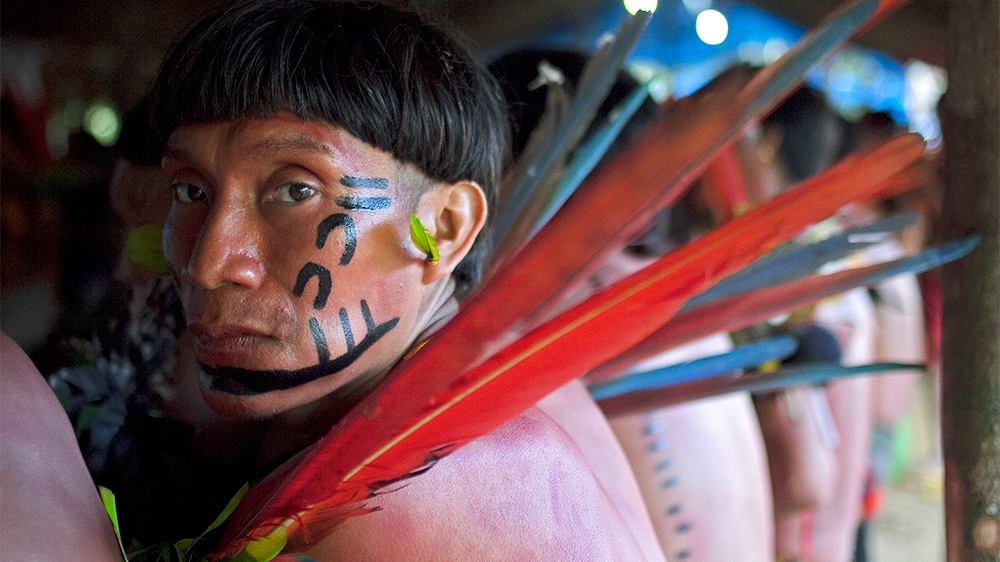 Yanomami Indians from two different villages meet in Novo Demini on the border between the states of Amazonas and Roraima [File: Odair Leal/Reuters]

According to a note by the Yanomami Hutukara Association, sent to Al Jazeera by spokesman Dario Yawarioma Urihitheri, the youth who died was from a region called Helepe on the Uraricoera River, an “entry route” for the miners.

“We want the Federal Police, Funai and the armed forces to remove the garimpeiros from our land,” the note read, referring to illegal miners. “The virus could invade our land, along with the invaders who seek gold.”

According to anthropologist Alcida Rita Ramos in her study The Political Role of Epidemics: the Yanomami Case, 1,000 Yanomami – or 14 percent of the population – died from diseases from 1987 to 1990 at the height of a gold rush.

Recent satellite images from March from ISA, first reported by BBC Brasil, show prospectors advancing on a part of the reserve populated by an “isolated” Indigenous group and 114 football pitches of degraded forest.

Uncontacted tribes at even greater risk

Brazil is home to 114 isolated or uncontacted tribes that have very little or no contact at all with non-Indigenous society and have no “immunological memory” to modern diseases, said Antenor Vaz, an expert who previously led the isolated and recently contacted department of Brazil’s Indigenous agency Funai.

The largest number of Brazil’s isolated tribes are concentrated in the country’s border with Peru in the vast Javari Valley, which is the size of Austria. The valley is the second-largest Indigenous reserve after the Yanomami land.

In recent years, the region has seen an uptick in the number of illegal incursions by poachers, drug traffickers, loggers and miners.

But as the pandemic rages, local activists have also raised the alarm that fundamentalist North American Christian missionaries are gearing up for expeditions to contact and convert isolated tribes in the region using planes and helicopters.

Since Brazil’s 1988 constitution, it is illegal to force contact with isolated Indigenous people except by qualified teams in exceptional circumstances such as health emergencies.

Following a lawsuit by leaders from Javari Valley Indigenous Peoples Union, a local judge has ordered that the missionaries can not enter the reserve and should be removed with force if necessary, citing coronavirus risk fears.

“Imagine, today you have a pastor that has access to all of the precise information of where these isolated Indigenous are,” said Antenor Vaz.

Meanwhile, following a report in the O Estado de S Paulo newspaper, federal prosecutors announced this week that they would investigate the country’s national Indigenous agency Funai for withholding $2.1 million (11m Brazilian reais) in emergency coronavirus funding for two weeks during the crisis.

“We are working to clarify why there is no immediate application of resources to favour the Indigenous people,” superior federal prosecutor Antonio Carlos Bigonha told the newspaper.

In a statement, Funai said the money “will be used for different purposes, such as the emergency purchase of food for areas of extreme social vulnerability, the displacement of teams to the Protection Fronts of isolated and recently contacted Indigenous peoples, as well as the acquisition of vehicles and boats to enable the transport of civil servants to the villages and of Indigenous people to the health units.”

‘You can’t see the virus’

Fears of rising invasions of Indigenous lands during the coronavirus crisis come amid reports of falling surveillance operations due to the pandemic, considered by experts to be the greatest driver of deforestation, leaving communities potentially more exposed to the virus as well as violence.

Brazil’s Federal Prosecutor’s Office this week opened an investigation into the dismissal of a director at the environmental agency Ibama, after an enforcement operation in Para state that led to the destruction of expensive illegal mining equipment on an Indigenous reserve.

According to Brazil’s Pastoral Land Commission (CPT), at least nine Indigenous people were killed over land and resources conflicts in 2019, the highest number in 11 years.

In Rondonia state, the epicentre of last year’s Amazon fires, Indigenous leader Ari Uru-Eu-Wau-Wau was found dead over the weekend, suspected to have been murdered with blows to the head, near the edges of the Uru-Eu-Wau-Wau reserve, which is constantly targeted by loggers and land grabbers.

Also in Rondonia, members of the Karipuna Indigenous tribe have filed a complaint after seeing non-Indigenous inside their reserve clearing an area of forest.

Their reserve near the border with Peru and Bolivia is also constantly targeted by loggers and land grabbers and has lost around 7 percent of its forest cover in recent years to criminal gangs according to Federal Police estimates.

Adriano Karipuna, one of the group’s leaders, told Al Jazeera that he feared the criminal groups would increase their work rates during the coronavirus crisis, further destroying the reserve and exposing them to the disease.

“You can’t see a virus,” he said. “We’re scared that one of these invaders will bring it inside our land.”