Santiago, Chile – Scrawled between “this is revolution” and “resist” on the wall of an empty street in downtown Santiago is the phrase: “The street is ours.”

Just months ago, the street saw tens of thousands protesters march over inequality and the rising cost of living in Chile. Now, the street is quiet as the neighbourhood has been placed under strict quarantine to stem the spread of the novel coronavirus.

While the graffitied walls appear to be the only trace of the mass demonstrations that had gripped the country for more than five months, protesters say they have not been silenced, and the movement will continue from their homes.

“We aren’t leaving our houses because we’re being responsible,” said artist Paloma Rodriguez. “But the discontent remains.”

Many protesters remain distrustful of conservative President Sebastian Pinera, fearing his government will continue to put economic interest over the welfare of the citizens, especially as the country responds to the coronavirus, which has infected more than 7,200 people and killed 80 in Chile.

“We’re saying to the government, look after the people and leave your economic interests on the side,” Rodriguez told Al Jazeera, adding that many feel it is “impossible to stay quiet”.

That is why many are now seeking traditional, and non-traditional, ways to protest and keep their movement alive.

Rodriguez, who had put her politically charged art on the streets during the mass demonstrations, created a virtual mural with peers. Shared and viewed by thousands on social media, the mural criticised the state’s reluctance to call for a total quarantine.

Combining Photoshop with digital illustration, Rodriguez virtually recreated one of her existing works of a woman whose face is covered with a green feminist scarf. The virtual adaptation now wears a protective health mask, her scarf moved to her neck. Beside Rodriguez’s figure, Chile’s president is illustrated with a coronavirus cell for a head. “TOTAL QUARANTINE NOW” is written above.

“Publishing on social media is another way to protest,” she says. “We can even reach more people this way than in outside spaces.”

Others have turned to more traditional ways of protesting, including the “cacerolazo” or the pots and pans protest.

Every Friday at 9:00pm (01:00 GMT Saturday), Chileans take to their gardens and balconies to bang pots and pans, demanding those who were jailed in the recent unrest be released on house arrest.

During the mass demonstrations, more than 30 people were killed, thousands wounded – including 460 eye injuries – and more than 2,000 were detained and often placed in overcrowded, high-security prisons.

So far, Pinera has called for the release of elderly, pregnant or terminally ill prisoners, but many others still face risk.

Dozens of COVID-19 cases have been confirmed in the country’s prisons, sparking riots amongst detainees and prompting calls for many to be released.

“We are in a pandemic, it is a risk to their lives to keep them in jail,” said Pablo Bravo, who is on a committee that fights for the freedom of those who have been imprisoned.

Since the quarantine, the committee has organised the weekly cacerolazo to demand the release of prisoners.

Bravo said the cacerolazo has been practised in Chile for decades and was especially present during periods of restricted freedom, including the country’s 17-year-long dictatorship, which ended in 1990.

“During the dictatorship, people also were under a curfew, just as we are today,” he said. “Cacerolazos are a way to show mass social discontent from home.”

While the sounds of the pots and pans echo in the streets, other groups are finding ways to organise as well.

Javiera Manzi, spokeswoman for Coordinadora 8M, marched alongside millions of women on International Women’s Day on March 8 – days before the pandemic hit the country.

Coordinadora 8M, a feminist advocacy group, along with other women’s rights groups were at the forefront of the protests that swept across the country. The groups called for legal abortion and an end to domestic violence, among other demands.

Manzi said that despite the quarantine, now is not the time to stay quiet.

“We need to think of different ideas, rather than taking to the streets,” she told Al Jazeera.

On March 29, Coordinadora 8M projected the images of protesters and victims of state repression onto the buildings throughout Santiago.

“We continue to organise ourselves in these weeks of pandemic and pain, but from our homes,’ said Coordinadora 8M in a statement. “Without letting go of the protests, of the desire for another life”.

With one of the highest inequality rates in the world, Chilean protesters have demanded social reform. Many want to change the rigorous neoliberal measures implemented during the 17-year dictatorship of Augusto Pinochet, which ended in 1990.

In November, Pinera yielded to some of the protesters’ demands, and allowed for a referendum to change the country’s Pinochet-era constitution. The much-anticipated vote was set for the end of April, but has been pushed to October due to the coronavirus 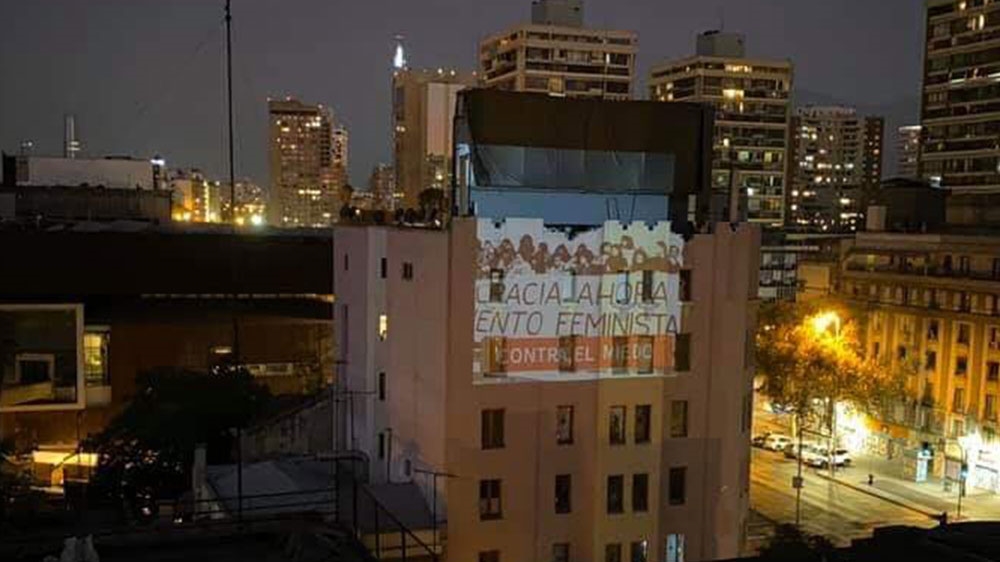 Rodriguez, the artist, meanwhile, is busy working on several virtual protest projects, but is determined to go back to the streets as soon as she can. She says the next street mural she has planned will encourage people to vote for the constitutional reform, spelling out the word “APPROVE”.

She has already chosen the wall she will paste it on.

“Everything we had planned before the quarantine is on pause, but it’s going to happen as soon as the pandemic passes.”