Wonboyn, Australia – “It was about two months after the fire,” said Ian Williamson. “We’d been into town shopping. And I just collapsed on the ground crying and screaming.”

On January 4 this year, the devastating bushfires that made media headlines around the world ripped through Wonboyn, a small lakeside community on Australia’s east coast.

Williamson and his wife Munlika were protected in a fire bunker he had built on his property, but he says he has developed Post-Traumatic Stress Disorder or PTSD as a result of the experience.

He says the devastation of the fires affected other residents as well.

“I suspect – I know – there are a lot more people affected but won’t talk about it,” he said.

Wonboyn is a small, tight-knit community, whose social life is centred around the voluntary fire service.

While the rest of the community were evacuated, Ian and Munlika were two of the 15 firefighters who stayed behind to battle the fires.

Such was the risk that the police visited in the lead-up to the fire to register those people who decided to stay in case they died in the blaze.

“RFS [Rural Fire Services] headquarters basically said Wonboyn was lost. They could do nothing to support us, they could give no assets, nothing.”

Wonboyn – accessible only by a single road – was cut off for three weeks and many homes were lost.

“I would have lost my house [if I hadn’t have stayed]. It was a scorched earth,” Ian said.

Home to a mostly older, retired population, Wonboyn is famous for the quality of the oysters that are farmed in the local lake.

Ian – a retired scientist and engineer – now farms oysters as a hobby and says the local industry was severely affected.

“The lake was trashed. There were dead deer lying in the lake, dead kangaroos, things rotting.”

He described how burned ash and other bushfire debris continued to seep into the lake every time it rained in the months following the blazes. It has only begun to clear up recently.

“We are so privileged. It really is a pristine environment. There’s only a couple of lakes on the east coast of Australia that farm oysters that are considered totally pristine and this is one,” said Ian.

Not only has the oyster industry felt the effect of the fires, it was also damaged by the downturn in the economy due to the coronavirus pandemic.

“We are only just starting to recover,” he said.

As well as oyster farming, Wonboyn is heavily reliant on tourism.

Luke and Sarah Burch bought the local caravan park in October 2019 and moved down to Wonboyn for the bush lifestyle.

“We wanted the kids to grow up here,” Luke said. “We saw a lot of potential in the caravan park and Wonboyn.”

Sarah was six months pregnant with their fourth child when the fires flared.

Yet despite the devastation, she said that the community worked well to rebuild and support each other.

“The fires brought the whole community together,” she said.

She described how there were community dinners in the fire shed every Saturday and support from community organisations and charities.

“It was really nice, especially catching up afterwards and just feeling such a sense of community and care and mateship. It was really lovely,” she said.

But just as the community was starting to recover, the Australian government introduced strict travel restrictions and border closures to combat the spread of COVID-19.

“What have we done,” Luke recalled thinking. “We’ve left a good job, a good town, with good friends to come here and lose everything. That’s what it felt like.”

Luke says that the effect of the bushfires was “pushed to one side” by the pandemic.

“To have COVID break everything apart and just have no connection with anybody – that was much harder,” he said.

Harder than the fire

The enforced isolation and social distancing meant an end to the social gatherings that had held the community together after the fires.

“COVID was harder than the fire in that sense,” said Sarah.

But government subsidies have helped to keep the business afloat and the recent easing of travel restrictions means that local tourism is returning gradually.

The bush is also regenerating, with new green growth and a local wildlife such as kangaroos, a type of giant lizard called perentie and native birds is returning.

“It actually feels a bit exciting for people to come back and see that it’s growing back,” Sarah said.

“And that feels really nice to share with people. Because when it first happened, you wondered when you would see anything green ever again.”

“We didn’t know if people would even want to come back,” added Luke. “We felt the reason [for tourists] to come here had been burned out.”

Yet the threat of future fires hangs heavily over their heads.

Luke has recently joined the fire service as a volunteer and says he now feels better prepared.

Yet there are still concerns that severe fires could happen again unless further precautions are taken, in particular, to clean up the old undergrowth, which was the initial spark for the wildfires

“To me [the bush] looks ready to go [up in flames] again, and that’s really concerning,” said Sarah.

It is a threat that also concerns Kel Henry.

A resident of Wonboyn for nearly 30 years and a full-time oyster farmer, Henry recently took on the job of volunteer fire chief.

“I don’t think we’ve ever expected anyone else to do it for us,” he said. “We do it ourselves.”

“We all found it very hard straight after it. I think everybody found it hard. It was all a bit mind-altering. I think we’ve all come out of it reasonably well though.”

The previous chief left Wonboyn after the fires.

As volunteers, he said, no one gets paid, and they simply stop work to fight fires when required to do so.

He was also pleased to see that more residents – such as Luke Burch – had decided to join the fire service since the experience of last summer.

“What used to happen is that when you first came to this place, it was understood you would become a member of the RFS,” Henry said.

“Everyone’s refocused now. And [newcomers] have understood that if they want to live here and they want to enjoy what is here then you really need to put in.”

Yet the threat of future fires still concerns him.

He said the problem they now face is that the fuel load – the dry, dead undergrowth which acts as a tinder box – will get to the same amount around the same time next year.

Due to the extent of the fires, he said, the bush is now a “blank canvas”.

Henry says more work is required to clean up the fuel loads that build up on the forest floor.

“Straight after the fire you could walk through this place very easily and indicate the areas that had been very recently hazard-reduced. Yes, the fire had gone through [but] it was a very different fire. It wasn’t this out of control wildfire, it was a ground fire.”

While the local fire service volunteers used to do this themselves, Henry says now the process is complicated, slow and bureaucratic, with permissions sought from local councils, parks management and environmental groups.

“What would take us about a week to organise now takes about three years,” he said. “You can look around this place and see where we’ve been active.”

Despite the challenging year the Wonboyn community has had, even at Christmas, the voluntary firefighters continue to show their support.

Every year they would hold a Christmas event at the fire shed, with food and fire truck rides for the children. This year due to COVID-19, they simply distributed Christmas hamper packages.

“This is a big deal,” said Williamson, holding up one of the hampers. “This shows what the community does.” 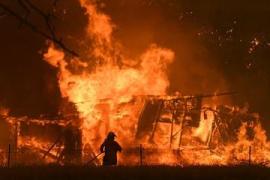 It is being called Australia’s ‘Black Summer’, months of raging bushfires devastated the country’s southeast. 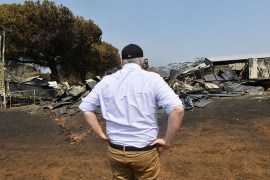 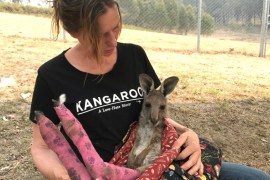