Hong Kong, China – Through longing glances in corridors and across intimate table settings, In the Mood for Love tells the slow-burning love story of two beautiful, betrayed neighbours.

As the story unfolded on cinema screens 20 years ago, it quickly entranced international audiences, creating a mood and aesthetic that lingered with movie-goers long after the credits had rolled – the patterned flowers on Maggie Cheung’s qipao (a traditional Chinese dress), Tony Leung’s neck craned over his typewriter as he worked, and the curls of steam from hot food prepared outside, amid a neon-lit Hong Kong that was, even then, fast disappearing.

The film scooped up awards and nominations across the world, including Cannes, and generated a cloud of acclaim for director Wong Kar-wai. Critics still rank the movie among the best ever made, academic papers have been dedicated to its cinematic impact, and fans include director Sofia Coppola and the late Anthony Bourdain. The indie movie streaming platform MUBI was dreamed up by founder Efe Cakarel, when he found that he was unable to watch the film while in a cafe in Tokyo.

After 20 years, the film’s anniversary has already been marked around the world in a variety of ways, from its 4K restoration, to a theatrical adaption at the Sydney Opera House.

Pondering its impact, Giorgio Biancorosso, professor of Music at the University of Hong Kong, said the film has “fed image-making from fashion to interior design and even contemporary art” in the city.

“The film has ‘cleared’ on the global stage a certain sensibility – a penchant for longing, reminiscing, dwelling on past missteps and missed opportunities, an almost morbid attraction to unfulfilled romance,” said Biancorosso, who is currently finishing a book on the director.

New York-based Arthur Tam, a freelance writer and former editor for Time Out Hong Kong, said the film’s aesthetic is hard to shake.

“That style is so iconic,” said Tam, dubbing it “not to sound cliched, but when East meets West and starts converging”.

“I think Maggie Cheung in that film also personifies that very sexy Hong Kong Chinese woman, which wasn’t really a big thing before that time period,” he said.

In a 2009 interview with IndieWire, Wong Kar-wai said that there while there were between 20 and 25 dresses for Cheung and, because the film was condensed, “it becomes like a fashion show; she changes all the time.”

This year, the US edition of Vogue listed the film as a popular reference for designers and photographers “making its mark on the runways of Roberto Cavalli, Erdem, and Derek Lam to name a few … the Mulleavy sisters name-checked it on their list of films to watch for isolation inspiration”.

Writer and editor Yi Wong took inspiration from the film in her piece That Era, which explores the protagonists in a 2020 Hong Kong, and was published in Mekong Review, an Asian literary journal, this month.

In preparation for the piece, she watched the movie multiple times. Drawing on elements from the film, Wong said it was not difficult to translate these into a contemporary setting.

“That is one of the reasons the movie is so well received these days,” she said.

“Human beings still love each other, they still cheat on each other and they still gossip about each other or offer you unsolicited advice about when is the best time to leave Hong Kong because of current affairs,” said Wong, who is currently working on a collection of short stories called, Ways to Love in a Crowded City, exploring love in a city where “nobody has enough time or space for anything”.

Moonlight, the 2016 Academy Award-winning film written and directed by Barry Jenkins, took inspiration from the film, with cinematographer James Laxton telling the Film Stage blog that he was shown images from In the Mood for Love and other Wong Kar-wai films as visual references. “I can’t even touch that film,” Jenkins later said in adoration of the film in an interview with Criterion.

The film’s resonance across a large international audience has also fed into a particular view of Hong Kong life.

But while the film cast the city in a romantic light, Biancorosso noted, “Curiously, few have attempted to replicate Wong’s achievement.”

In part, this may be due to the hurdles that Hong Kong’s struggling film industry faces.

Sean M Tierney, a university film lecturer in Hong Kong, said while In the Mood For Love may have influenced the “artier side of the industry”, Wong’s time, budget and “indulgence” are not afforded to other filmmakers in Hong Kong.

“Movies cost money, and for all its bleating about supporting Hong Kong’s most visible global export, the government has made little to no effort to truly support a very struggling industry,” Tierney said.

“If you want money, you have to look to China, and that means you can’t make a movie that crosses a multitude of visible and invisible lines. There are countless fascinating, moving stories that could be told in local film, but only a very, very few of them get made.”

Over the two decades since the film’s release, Hong Kong has been through dizzying change – from frenetic political developments to the city’s ever-more crowded skyline and shrinking harbour. When In the Mood for Love came out, it was already savouring a bygone era. Now, it is a time that is even more remote.

During press junkets when the film was released, star Tony Leung – a child of the 60s – told the Toronto International Film Festival, the film conjured up his childhood. “I can still remember when I was a kid, the neighbours were very close to each other and we know each other very well and we used to go to the neighbours to play there every day, and we never closed our doors,” he said.

Today, language and political expression grows increasingly controlled. Last month, Hong Kong’s Museum of History temporarily closed its permanent exhibition for a government-led revamp, sparking censorship fears, while ghosts of protest slogans continue to be hastily covered over with grey paint. In the city, young people are increasingly protective of the past, and their access to it.

“A lot of Hong Kong people feel anxiety that people might come in and rewrite history that they knew about and have to learn and accept a new version of what happened in the past,” Wong said.

When the 29-year-old first saw In the Mood for Love as an undergraduate class at HKU, it sparked her interest in the concept of a different of Hong Kong.

“I’m still pretty young so there’s not a lot of history for me to feel nostalgic about, but I also feel that through the consumption of literature and movies like In the Mood for Love, there’s this imagination of a past that I didn’t get to be a part of and it feels so beautiful and so interesting,” she said.

“It really does feel very comforting to be rewatching In the Mood for Love at this moment in time.” 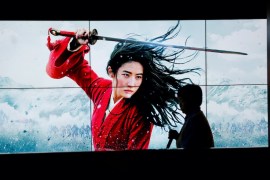 Parasite has already won 150 awards and could become the first non-English film to win ‘Best Picture’ at the Oscars. 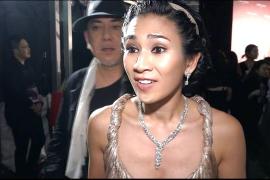 The film explores the relationship between a paralysed man and a Filipina caregiver who gives up her dream to earn a living.