America in 2020 is like a serial drama with plot twists as amped up as a Marvel movie – and with an equally cartoon-like villain. Each day, I tune in to see the latest developments from the comfort of my Istanbul apartment. Living abroad means I view what is happening in the United States through the filter of my computer screen, the same way others watch shows on Netflix.

In the first act, we saw President Donald Trump use a global pandemic as a political opportunity to bolster divisions. For vulnerable populations and front-line workers, the face mask became a lifeline; for many Trump supporters, it symbolised an anti-American restriction on freedom.

I watched the divisiveness unfold on social media. My Republican cousin posted memes mocking the efficacy of a mask, while Democrats like me posted selfies wearing masks to show which side they supported. According to a Pew Research study, roughly twice as many Democrats (63 percent) as Republicans (29 percent) say that masks should be worn at all times in public. In my real life in Turkey, masks remained un-politicised. Yes, they were an inconvenience, and not everyone always followed the rules, but no one questioned the new laws requiring us to wear them in public.

As a resident of Turkey, I am not entirely unfamiliar with political polarisation. I moved to Turkey the year Recep Tayyip Erdoğan was first elected as president: 2014. I quickly learned through acquaintances here that the country’s population was (and still is) deeply divided. At the time, Turkey’s political divisions contrasted with American politics, which seemed to be swallowed whole by a form of centrism that blotted out strong differences of opinion. Now, however, my Turkish friends just nod with knowing looks and say: “We know.”

Since my country has become more divided, I have never felt more “distant” from my Republican relatives.

Rifts of class and politics exist in my immediate family. I am the poor Social Democrat who studied liberal arts while struggling to afford the ridiculously high rents of San Francisco’s liberal bubble until I moved abroad. My sister and her husband are wealthy technocrats who own a Tesla electric car and tend to vote for Democrats, but hold somewhat libertarian views. My brother, a construction foreman, and his wife, a water infrastructure engineer, live in Alaska and typically favour the Republican Party. This year, however, my brother’s wife has decided to vote for an independent candidate. The people I share my political views with are not the same people I share my family with.

If my dad were still alive, we might be having long, heated arguments about politics. Once, in a discussion about genetically modified food on Facebook, one of my aunts implied that I am not my dad’s daughter with such views. It hurt and, childishly, I unfriended her. I felt that she had tried to blot out my arguments, which my dad would never have done, so I ended our online communication. Now, when I visit, we maintain a safe distance and stick to shared topics of interest like music.

With my mom, I can’t quite tap into politics in the same way I could with my dad. Perhaps she avoids the topic with me because I got angry with her after she voted for Trump the first time. I found it appalling then, and haven’t asked her who she is voting for this time. But she had used the electoral college system as an excuse to end the discussion. “My vote didn’t matter anyway,” she had said, “Washington votes Democrat!” And it’s true, in the context of my state, my Republican family members’ views are in the minority. They say they fear Democrats won’t fund the rural infrastructure projects that keep my family’s construction business afloat.

Instead, my mom and I talk about things like the chipmunks that visit her back yard or the dahlias she planted with her new husband. When she visited in 2017, it was her first time travelling overseas. This is not to say she didn’t love to travel. It’s just that our family trips all consisted of flights across North America in my dad’s small Cessna aircraft. Anytime she visited me, she’d come with an open mind. All eyes and ears to the sights and sounds of this city dotted with mosques and built on ancient Greek ruins. And when she met my Turkish fiance’s family, my mom and my future mother-in-law communicated without sharing a common tongue by showing each other photos on their smartphones. I translated along with my fiance and it was a warm meeting that ended with a night of dining, drinking raki and dancing.

It is not the first time my mom has defied what some may consider the stereotype of a Trump voter, and while I still don’t necessarily understand her political motivations, preserving our relationship feels more important to me.

As the coronavirus crisis deepened and the politicisation of science mounted, I worried about my brother who told me he wouldn’t wear a mask at work unless he had to. His history of smoking didn’t give me any assurance he’d survive a bout of COVID-19.

Meanwhile, my Republican mom started religiously wearing masks and gloves to work. During our weekly phone calls, we talked about ways she could avoid contracting it. In spite of their common political views, she, too, felt threatened by Republican anti-maskers, as a person with high blood pressure over the age of 65.

Then came Act 2, when Minneapolis police officer Derek Chauvin killed George Floyd. My social media feeds were divided between #BLM and #BlueLivesMatter supporters, opposing narratives of justice and equality versus riots and looting.

In Istanbul, I felt politically impotent in the face of this division. I wanted to get out and protest, but there were no protests happening here. Instead, I deepened my own understanding of America’s racist history and shared my views about anti-racism online. But I felt I was both preaching to the choir and to a wall. My Facebook conversations were fervent, but ultimately felt a lot like “slacktivism”.

Just like the anti-mask protests, American-style racism is something that perplexes people abroad. Turkish news outlets would highlight the injustice of America, but they would also frame the protests as episodes of rioting and looting. In a discussion about the protests with my fiance’s father, I found myself trying to explain the flaws in one-sided media coverage. I told him how the accumulation of violent images was in direct contrast to footage individuals were sharing on social media, where I saw peaceful protests and empty streets during daytime work hours.

But in the midst of our conversation, we reached a point of misunderstanding. Partly due to my flawed Turkish and partly due to my wrong assumptions about his political views, I felt he had sided with the police. The dismay must have been clear on my face because he laughed and corrected me. I was relieved. Although we may have different views on things, he is a lot like my dad was in conversations. He enjoys lively political discussion and doesn’t mind if your opinions don’t match his own. Conversations like these contrasted with much of what I saw in US media.

I worry we won’t be able to move home

On a personal level, I worry that another four-year Trump term might prevent my Turkish fiance and me from moving home. Strict, racist immigration policies could make it almost impossible to move home together. As an American, I had always assumed it was my right to marry whoever I wanted and to ensure they have the same rights as me.

From a more practical perspective, though, we have already avoided starting his immigration process because moving to America presents some logistical nightmares: affording healthcare, the need for a car and expensive housing. The reason we haven’t moved back yet is the same reason I moved away: America is too expensive for me.

Beyond economics, Trump’s anti-environment stance also hits close to home. During the past few months, California and Colorado have faced the largest wildfires in their histories and New Orleans has suffered multiple hurricanes, yet Trump appears indifferent. My family almost lost our home to a forest fire in the 1990s, so apart from believing climate science, I have visceral memories of flames and smoke. One of my greatest fears is that another term of Trump will mean death and suffering that far eclipses party politics by unravelling ecosystems on a global scale.

But with nowhere to channel these fears, I started to feel numb. I realised that one of the reasons I felt so politically impotent was the one-sided nature of consuming the news.

I coped with the mounting tension and political frustration I felt throughout the spring and summer by taking a media fast during a socially distanced holiday. I drove past wind turbines dotting the hills of the Izmir province in Turkey and explored the Aegean seaside. In ancient Teos, with its Greek ruins and 1,000-year-old olive trees, our political moment briefly seemed insignificant, just another knot in the tree bark. Returning the focus to my present place and time helped me remember that so much of politics is out of my hands. Even though we’re all a part of it, what’s happening in the US is bigger than one person.

Now we’re in Act 3: the election. US presidential elections are usually marked by a low voter turnout of below 60 percent, which is difficult to explain in Turkey. Here, 83 percent of the population votes in elections on average and the chance that the nation’s leader can be elected without winning a majority of votes simply doesn’t translate. Voting rights in Turkey are a point of national pride, while in the US, they’ve started to seem like a partisan issue.

This year, the president of the US opposed mail-in voting and appointed a postmaster general who deliberately hindered the operations of the US Postal Service preceding the elections. Fortunately, I’m registered to vote in Washington state, which allows people living abroad to vote via email. I voted early in September by uploading a scanned copy of my ballot and clicking send. My state also offers all of its registered voters the right to vote by mail, but many people are choosing to drop off their ballot in person this year. Voters in states with the potential to flip from red to blue have had to wait hours in line at the ballot drop-off locations for early voting.

With election day here, my nerves are frazzled. Friends in Istanbul have made plans to help ease the tension: one woman has created a Facebook group where we can chat and reflect on the live updates, while runners in my neighbourhood are planning an early morning run to distract themselves. And it is not just Americans who will be watching, either.

Even though I’m watching from afar, I know that the elections will impact the entire world, which makes me feel almost too close to home, in spite of the distance. 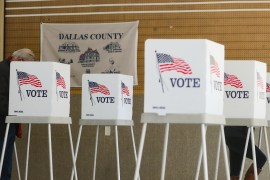 Casting a vote at home after decades abroad reminds me what a privilege it is to have a voice in government. 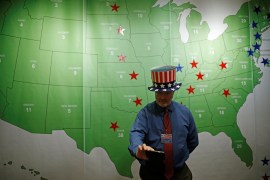 US election: What time are election results?

Millions of Americans are voting, but when exactly will we know whether Trump or Biden won the election? 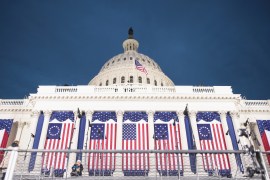 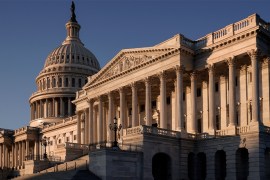 US Senate races to watch

Democrats are putting up a tough challenge as Republicans’ Senate majority is at stake on election day.