It made the commonplace possible: the car, the Uber, the bus, the motorbike. We took to the skies in aircraft and spread our wings across the world. It even mobilised war with tanks, ships and submarines. Agricultural productivity soared with the development of the tractor and other farm machinery. It gave oil-producing countries unimaginable wealth.

But after 160 years of shaping the world we live in, the demise of this extraordinary force-for-change is in plain sight.

The growing push for net-zero carbon emissions by 2050 means that a new revolution is upon us, one that will change the way we power our lives, in the home, in our farmers’ fields, and on the road.

While some would say that being carbon neutral by 2050 is not enough to stave off the worst effects of climate change, we can say for certain the era of the electric vehicle is upon us. From the United States to the European Union and beyond, nations are pledging to phase out the sale of new petrol and diesel vehicles within 15 years.

In China, car buyers bought more plug-in vehicles in 2019 than the rest of the world combined. In Norway more than 60 percent of new cars registered in September this year were electric.

Globally, battery technology is getting cheaper. According to research by BloombergNEF, the cost of a lithium-ion battery pack for an electric car fell 87 percent from 2010 to 2019.

Right now Tesla is the most valuable carmaker in the world despite making far fewer cars than its competitors like Toyota and Volkswagen.

Meanwhile, fossil fuels still account for 80 percent of the world’s energy. But as energy analyst Ramez Naam pointed out in a fascinating episode of the Outrage and Optimism podcast, fronted by Former UN climate chief Christiana Figueres, the balance is shifting fast.

“None of this is happening as fast as we want. But it’s happening a lot faster than people in industry, especially in the fossil fuel industry or the automotive industry, think it’s going to happen. 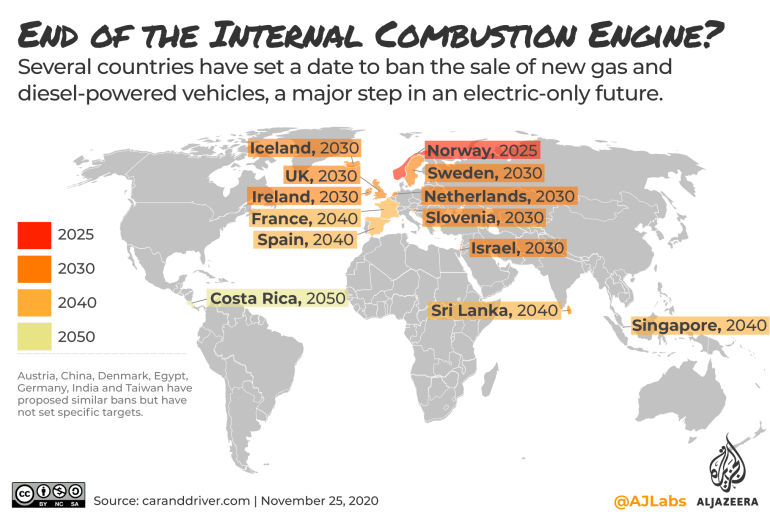 While car and truck tailpipe emissions slowly phase out in the coming decades, other transport sectors present an altogether more daunting challenge.

Aviation accounts for 3 percent of the world’s carbon footprint (some say more), but powering passenger planes sustainably is a tough call. Yet there is optimism that by 2050, short-haul flights at least, will be fuelled by green technology like hydrogen fuel cells.

One of the hardest areas to transition is shipping. The global merchant fleet carries 90 percent of world trade.

After moving from sail power in the mid-19th century, to coal-burning steamships, and then the modern era of heavy fuel oil, the industry now looks to natural sources of propulsion again. This is a considerable and difficult problem, especially for the colossal bulk carriers that ply our oceans.

But the transition has begun. China promises to be carbon neutral by at least 2060. US President-elect Joe Biden is proposing to make electricity production in the US carbon-free by 2035, providing millions of jobs in the process. And across the world, nations are upping their ambitions to reduce emissions.

Again, more needs to be done, but it all helps drive technological progress, in all sectors.

And in the coming years, the internal combustion engine, that extraordinary feat of scientific progress, will become a chapter of history as we quietly buzz about in our electric cars.

1. Is your chicken burger contributing to deforestation?: A new investigation has found that vast areas of forest in Brazil are being cut down to plant soybeans, which are then shipped to the UK and used as animal feed for chickens that are eventually sold at main supermarkets and restaurants.

2. The world’s highest science lab: Last year 34 climate scientists headed up Mount Everest, with all their equipment, to study the environmental changes taking place at the world’s tallest peak, why they are happening and what can be done about it.

3. Autumn leaves fall earlier: Due to global warming, trees in Europe seem to be dropping their leaves earlier than normal. This also means that they will be able to store less carbon than scientists had hoped.

4. Joe Biden’s climate challenge: With its new president-elect, the US will no longer be a world leader against climate science. But will a change in administration be enough to help the fight against global warming?

And so you have to ask yourself ... am I the CEO of an oil and gas company or the CEO of an energy company? Because the first one is doomed. The second one, there’s massive growth, for the world’s going to use much more energy in 2050. But it’s going to be clean energy.