What are the different kinds of COVID-19 vaccines?

As the world gears up for the fastest-ever developed vaccine, several drug companies have taken different routes to manufacture the antidote to the pandemic that has held the world hostage since March of this year.

With the global economy at stake, millions working from home and, according to UNICEF, 463 million children around the world unable to access remote learning, the need for a vaccine is urgent.

RNA: Short for ribonucleic acid, RNA is one of the crucial macromolecules – larger molecules comprising proteins, lipids and carbohydrates – for life. RNA vaccines work by introducing an mRNA sequence (the molecule which tells cells what to build) into the system which is coded for a disease-specific antigen.

DNA: Short for deoxyribonucleic acid, DNA is another of the crucial macromolecules for life. A DNA vaccine involves the direct introduction into appropriate tissues of a plasmid – a double-stranded molecule which exists in bacterial cells.

Viral vector: These vaccines use live viruses to carry DNA into human cells. It is one of the more effective means of gene transfer to modify specific cell types or tissue for therapeutic purposes.

Protein sub-unit: This uses a part of the virus, in this case, the protein component, to create a vaccine. These vaccines can be administered to almost anyone who needs them, including people with weakened immune systems and long-term health problems because they do not harm the immune system.

Inactivated virus: This particular type of vaccine uses the part of a virus which is no longer active, but which causes the disease. These vaccines do not usually provide the same degree of immunity as a live vaccine. Booster shots at a later date may be necessary to maintain immunity.

Virus-like particle: This type of vaccine contains molecules that mimic the virus but are not infectious and, therefore, not a danger. VLP has been an effective way of creating vaccines against diseases such as human papillomavirus (HPV), hepatitis and malaria. 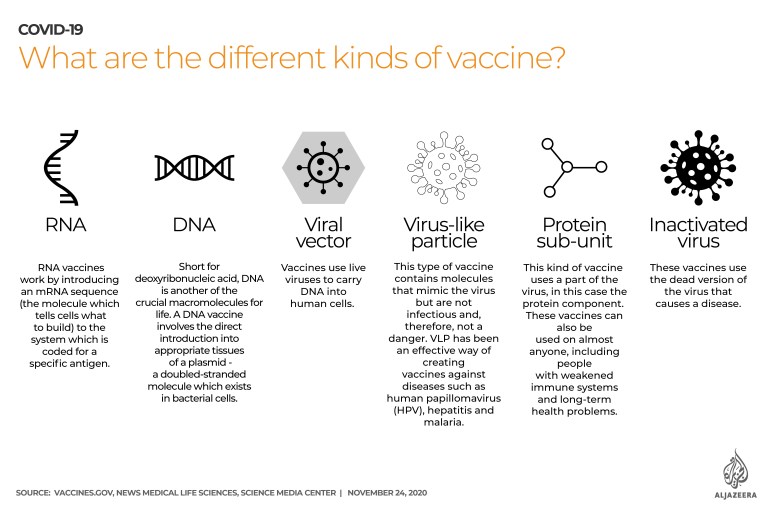 Trials around the world

According to the London School of Hygiene and Tropical Medicine, there are 11 different vaccines for COVID-19 throughout the world being tested on human beings. 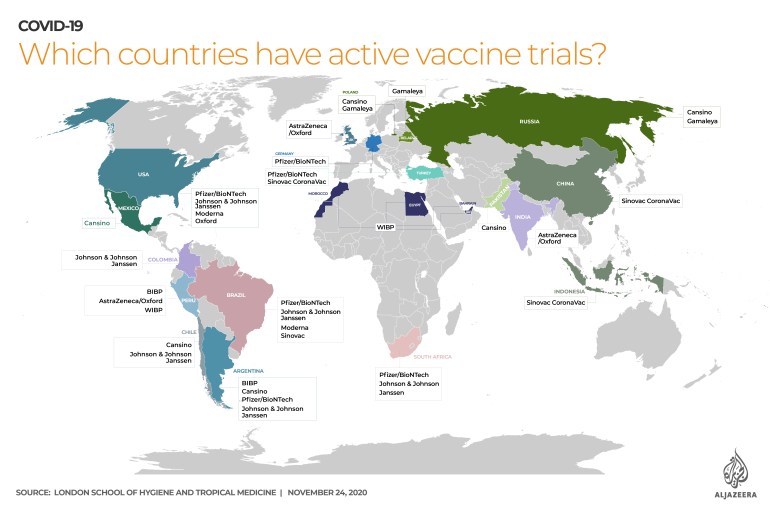 According to the World Health Organization (WHO), there are more than 150 vaccines under development for COVID-19.

Some of the vaccines are getting closer to release as they pass through the third phase of human trials.

According to the WHO’s chief scientist, Dr Soumya Swaminathan, phase one of human trials is usually carried out on 30 to 50 people to make sure the vaccine is safe and does not have any unexpected side effects. Phase two involves a larger trial that begins to look at the vaccine’s immunogenicity, which is whether it elicits the required immune response. Phase three trials usually involve tens of thousands of people and test the efficacy of the vaccine, which is how well it protects a person against infection, as well as its safety in such a large group.

Vaccines made in Russia and China were released prior to the third phase of human trials. 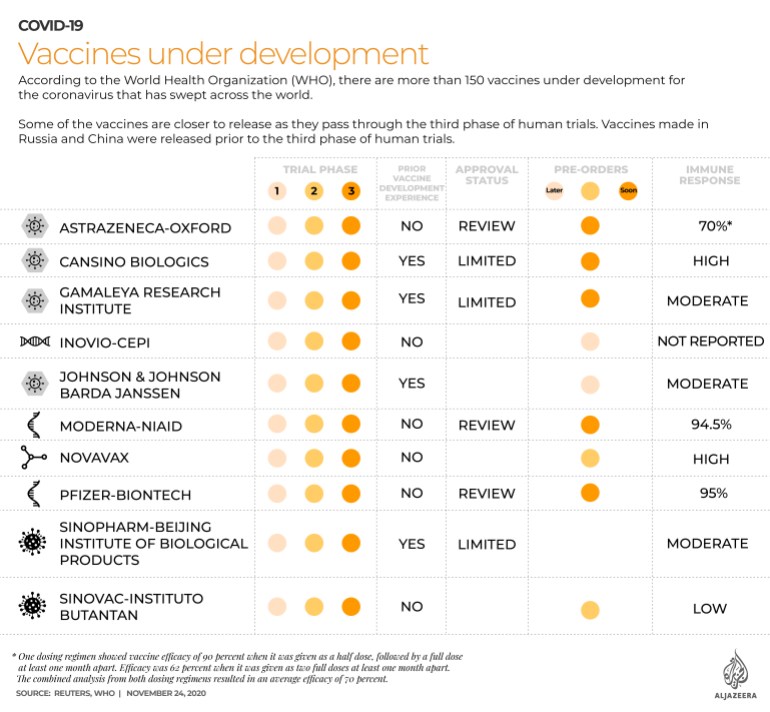 Almost 4.4 billion doses of the various vaccines have been pre-ordered around the world, according to a tally by the Reuters news agency.

A fierce international competition to lock in billions of dollars worth of orders for the vaccine has been under way for months, and some companies will start delivering millions of doses as soon as mid-December.

AstraZeneca, which has promised it will not make a profit on the vaccine during the pandemic, has reached agreements with governments and international health organisations that put its cost at about $2.50 a dose. Pfizer’s vaccine will cost about $20 a dose, while Moderna’s will costs $15-25, based on agreements the companies have struck to supply their vaccines to the US government. 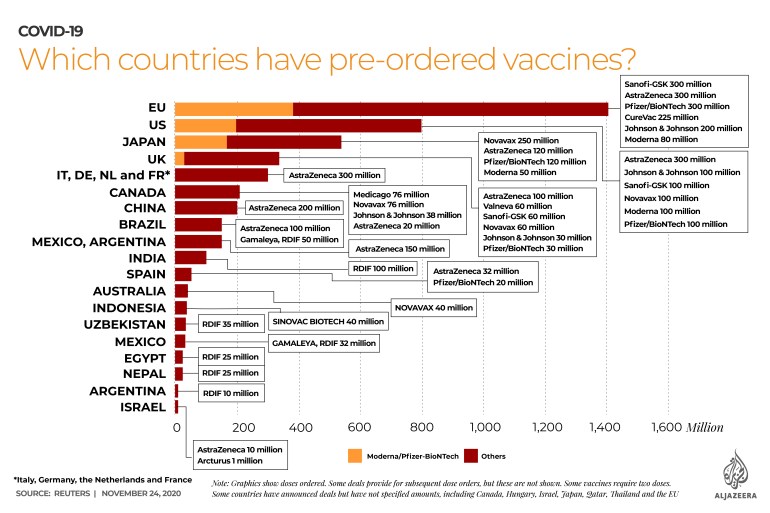