Since the introduction of the Migrant Protection Protocols (MPP) – also known as “Remain in Mexico” – in 2019, asylum seekers seeking to enter the US via the US-Mexico border must wait in Mexico for the duration of their US immigration court proceedings. Under the policy, asylum seekers are processed in the US and given a date to return for an immigration court hearing, and then sent back across the border to Mexico.

As a result of this policy, introduced by the Trump administration, thousands of migrants and asylum seekers found themselves sleeping on the streets near the border. Over time a camp of around 3,000 to 4,000 people began to form on the banks of the River Grande that separates the northern Mexican town of Matamoros from the Texan town of Brownsville.

Since the pandemic began thousands have abandoned the tent village. Many now live in apartments, often in squalid conditions. Others have paid smugglers to transport them to the US. Some have headed home.

Approximately 800 people remain in what is now a tightly policed camp enclosed by a tall razor-wire topped fence.

Here, some of the remaining residents share their stories:

Yami, 34, from Honduras: ‘You need a busy mind to survive here’

Yami is struggling to stay motivated after she lost her job in October. She was told it was to give her “a break”, but her job meant everything to her. “My mind is less occupied,” she explains. “You need a busy mind to survive here”.

Yami managed one of the four “free stores” in the camp. Her role was to distribute donations to asylum seekers and migrants who live in her section. Every day she would organise and allocate all kinds of supplies, from food to nappies, toiletries to tents, as and when they were donated by the US non-profit, Team Brownsville.

At its height the camp was home to as many as 5,000 people, although following the pandemic only about 800 people remain. With fewer people in the camp, the residents no longer needed four free stores. Yami’s was the store that closed.

Yami has a quiet voice that matches her small frame but not the substance of her words. She talks quickly while moving around the little wooden structure with tarpaulin walls and a mud floor that serves as the communal kitchen for the tents in Yami’s area. An assortment of pots, utensils and kitchen spices are neatly arranged on shelves.

“I really miss the social side,” she explains. “I loved it when people came to see me, with their smiles, and I miss helping them and supporting them.”

“With the responsibilities that I have as a woman, as a mother, sometimes I can’t go out every day to visit other people in the camp.”

She earned just $60 a week, but it made all the difference.

“My salary helped a lot with expenses such as food, clothing and shoes. I don’t know what we will do now,” she says.

As she talks, a mouse scuttles along the shelf next to her head. A few minutes later, Yami leaps backwards when she spots it on the floor near her feet.

Yami’s family fled Honduras after her son was pursued by local gangs. With no time to save money or prepare for the trip, they left everything to make their way to the US to seek asylum. However, after a year in Matamoros – sharing a tent with her husband and three children through a pandemic and two hurricanes – they have now been told that their hearing will not be until mid-January at the earliest.

Xochilth, 26, from Nicaragua: ‘I’ve made good friends. But lost some too’

Xochilth runs a little restaurant just off one of the arterial paths in the north of the camp.

Although she helped out in her grandmother’s restaurant in Nicaragua, 26-year-old Xochilth did not come to the camp to start a restaurant. She started out making a few meals for the doctors, translators and nurses who work for the medical clinic in the camp, Global Response Management.

Over time, her business grew. Until recently, she had a contract to prepare 220 school meals per day for the children in the camp. But a few weeks ago, that contract came to an end, meaning that she had to let one of her two staff go.

She is sitting on a broken plastic chair, resting a bandaged ankle. She had been tidying the day before when a cup smashed on a gas canister and sliced into the top of her ankle. The wound needed five stitches.

She has been told to stay off her foot until the stitches come out in a week’s time. But, she says defiantly, “Two days. Maximum.”

I tell her she is a bad patient and that I will cook my own food, much to the delight of Dona Joana, the in-house El Salvadorian pupusa expert.

Before I know it, Joana is explaining the secret of “pupusas” as she slaps the corn dough into a thick pancake on her palms. She presses oodles of stringy Oaxacan cheese on top and finally a good helping of seasoned pork in the middle before expertly folding the edges to make a parcel ready to be pressed flat again and cooked on a baking tray balanced over a campfire.

She gestures for me to take over and before long there is a queue for “gringa puposas” (foreigner puposas).

With the customers satisfied, Xochilth and I resume our conversation about life in the camp. She smiles as she tells me about a guy she met here. “There was someone,” she says. “He crossed [to the US] about a month ago, but he still calls me every day.” A smile has crept across her face but that is all the information she is willing to share about him.

“I’ve made good friends. But lost some too,” she continues. Losing the school meal contract meant she could not keep all of her staff and the person she let go was her best friend in the camp. “She isn’t talking to me at the moment. But what could I do? I couldn’t afford to keep her on. I had to choose between her and Joana, and Joana is the only one who knows how to make pupusas.”

Olga is expecting her second child in January. Her husband left the camp in April to travel to the US. Typically the busy roads are difficult to police, so people can easily slip through unnoticed. However, with the pandemic came quieter roads and a higher probability of being caught, so her husband hid in various locations for a month before making it to the north of Texas.

Olga shows me pictures while explaining his journey: him hiding in the woods, waiting at the entrance to a tunnel and then in a warehouse before finally arriving in Dallas, tired and thin, where he currently works, installing Christmas lights.

Olga’s husband did not want to cross illegally; he wrestled with the idea for a long time, she says. But with no money in the camp, and no access to work, they had little choice. Basic food and provisions in the camp are provided via donations from local organisations but with a six-year-old son, the family desperately needed money. Her husband now sends what he can, usually around $100 per week, depending on the work he finds.

Without warning, the young Guatemalan mother leaps from her chair and rushes off through the camp calling out something about her son being in pain.

In a way that, perhaps, only a mother can, she had identified the distant cries of her son. Sure enough, she returns with a crying six-year-old who had fallen off his bike. He cries as he sits on a bench, inspecting the damage, but soon becomes distracted by some Lego pieces on the floor.

Olga says she has become more religious recently and that before she knew she was pregnant, her pastor had told her that she and her husband would soon have another baby. Not truly believing it, she visited the camp’s clinic and took a pregnancy test. The pastor was right, she smiles. 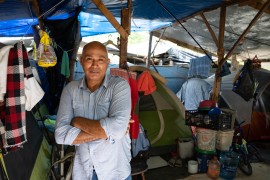 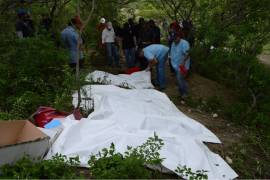 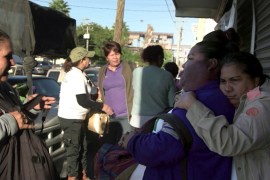 The brave women tracking their missing loved ones. 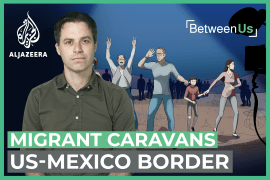 Journey to the US-Mexico border

‘Kilometre after kilometre, young and old, men and women, they keep on trudging … ‘