On January 27, 1820, Russian explorer Fabian von Bellingshausen gazed excitedly through his binoculars upon the long sought after terra incognita, the land we know today as Antarctica.

Three days later a British expedition, led by Irish naval officer Edward Bransfield, spotted the tip of the Antarctic Peninsula. The next year, in 1821, John Davis, an American sealer and explorer, was the first person to step foot on mainland Antarctica.

The discovery of the Antarctic continent came at a time when planetary concerns were more about territory claimed than the climate crisis, but the sights they beheld two centuries ago remain just as dramatic and breathtaking today. The question is – for how much longer?

Not yet the realm of man

In 2018, I was part of a scientific expedition on board the icebreaker Arctic Sunrise exploring the Antarctic Peninsula. We pushed through into the remote wilderness of the Weddell Sea.

“It’s hard to imagine any human influence here as the Arctic Sunrise gently pushes through a sea of ice,” I wrote.

“A lone ship in an unexplored sea. It cannot feel more isolated, remote and just stunning.

“Here too exists a spectacular festival of life. It is the realm of blue whales and orcas, of leopard seals and penguins and myriad marine animals, of thousands of species yet to be discovered. It is not yet the realm of man. And many want to keep it that way.”

Indeed the purpose of that 2018 expedition (above) was to provide backup science for a bid to create a vast Marine Protected Area (MPA) in the Weddell Sea.

That year the bid failed, stymied by objections from Russia, China and Norway at the annual meeting of the Commission for the Conservation of Antarctic Marine Living Resources (CCAMLR), the international body that oversees marine conservation in Antarctica.

But this month a new, repurposed version comes under scrutiny, at a time when protection of our oceans is more important than ever.

“We can’t afford to delay reducing the impacts of commercial fishing because climate change impacts are already damaging the region with ever-increasing temperatures,” she told Al Jazeera.

There is a big push to reduce the continuing assault on crucial krill fisheries. These crustaceans are at the heart of the Antarctic marine food web, serving as a main food source for the region’s iconic animals such as blue whales, fur seals and penguins. But factory ships are hoovering up the krill in ever-increasing quantities, threatening the delicate food chain.

Studies show that designating MPAs would protect the region’s unique marine ecosystem for generations to come and actually boost fisheries on the outside of the protected zones.

This year there are three marine parks up for designation – in the East Antarctic, the Weddell Sea, and the Antarctic Peninsula. Together that equates to more than three million square kilometres (1.8 million square miles) of the Southern Ocean that could be regulated and protected from all kinds of human activity.

The governments of Chile and Argentina have thrown their weight behind the push to protect waters around the Antarctic Peninsula. A joint scientific expedition to the region was recently the subject of a spectacular documentary filmed by National Geographic’s Pristine Seas project.

Evidence of the deterioration of this vital wilderness was abundant. Mercedes Santos of the Argentine Antarctic Institute said they use penguins as indicators of ecosystem health.

“In the [penguin] colonies where we work there has been a 70 percent reduction in size,” Mercedes said. “That’s a worrisome number. Lots of failures. It’s sad. We know that Antarctica, that the Antarctic Peninsula is changing very quickly.”

And just as telling is the state of the sea ice. Lieutenant Commander Engelbert Mori is chief of the Chilean Arturo Prat research base on the South Shetland Islands.

“We have meteorological data since 1947,” he said. “In the past, 20 years ago, the ocean was frozen for four to six months. Now it freezes for only a month or a month and a half. The climate has changed here in Antarctica.” 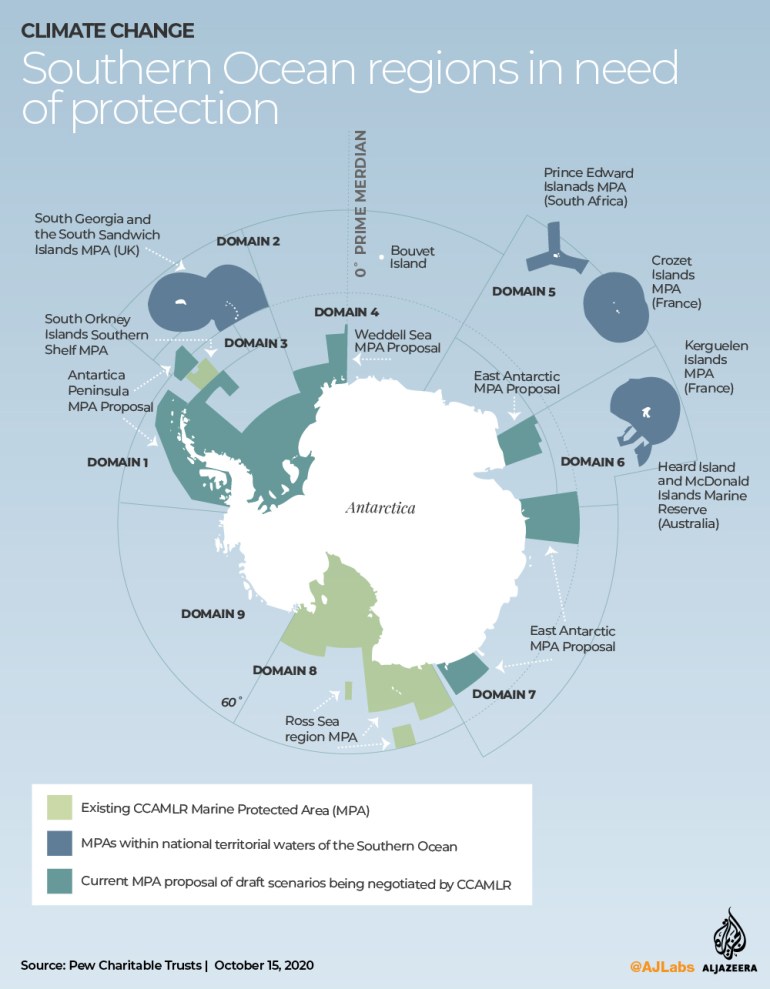 This year the CCAMLR meeting is, of course, a virtual affair, ramping up the challenge of achieving consensus without the benefit of face-to-face meetings.

But 2020 not only marks 200 years since the discovery of Antarctica; it will also see the 61st anniversary of the Antarctic Treaty. And that was an agreement reached at the height of the Cold War when countries agreed to protect an entire continent.

The only thing that prevents proposals like these from getting over the line is a lack of political will. Surely that now has to change, to protect a threatened continental ecosystem that has evolved in perfect and fragile balance over thousands and thousands of years.

1. Carbon cuts: In a bid reach net-zero emissions by 2050, a group of top asset owners, whose portfolios have a combined worth of $5 trillion, have committed to phasing out between 16 and 29 percent of carbon emissions linked to their investments during the next four years.

4. Battling wildfires: Embers – small, glowing and easy-to-miss pieces of wood or debris – are responsible for igniting 90 percent of homes and buildings during wildfires, according to the Insurance Institute for Business and Home Safety in the United States. But researchers are finding ways to model and track these windborne fire starters and create ember-resistant buildings to beat them.

Tipping points are so dangerous because if you pass them, the climate is out of humanity's control: if an ice sheet disintegrates and starts to slide into the ocean there's nothing we can do about that.