The video’s musical, historical and visual aspects were supposed to invoke empathy and grief.

Armenian cello player Sevak Avanesyan was filmed playing in the snow-white and debris-covered Holy Savior Cathedral in the town of Shushi in Nagorno-Karabakh, a breakaway region in Azerbaijan dominated by ethnic Armenians since the early 1990s.

The cathedral was shelled on October 8, according to Armenian officials, by two attacks of Azerbaijan’s forces that were part of their offensive to recapture the region that started in late September.

The resumption of the decades-old conflict triggered a full-blown information war that – both sides claim – reflects, distorts, lambasts and exaggerates the hostilities on the ground.

The cello piece, titled “Stork”, was written by Armenia’s most celebrated and tragic composer, Komitas, who suffered a nervous breakdown after surviving the mass killings of Armenians in Ottoman Turkey and died in a mental institution in Paris.

Armenia and many Western nations call the killing of up to 1.5 million Armenians a “genocide”, while Turkey refuses such accusations.

The #Cathedral was twice attacked on Oct 8 by #Azerbaijani armed forces. pic.twitter.com/mmlOPW4fGr

The music video was posted on October 12 on Armenia’s official Twitter account, and the message was clear – the cathedral’s shelling by Azerbaijan, a Turkic-speaking nation of 10 million whose closest ally is Ankara, was part and parcel of a centuries-old enmity of Turks towards Armenians.

The opinion is widely shared in Armenia, where many see the conflict as an apocalyptic strife aimed at destroying their statehood, history and culture.

“I hope we defeat the [Azeri] hordes this time as we did in the 1990s, and my people will not be exterminated,” Mari, a resident of the Armenian capital, Yerevan, told Al Jazeera.

But to Azerbaijan, such claims are a slap in the face.

Officials in Baku vehemently deny any links between the Ottoman-era conflict and their efforts to reclaim Nagorno-Karabakh and sparsely-populated adjacent areas that were once populated by hundreds of thousands of Azerbaijanis.

Baku simply rejects the very fact of the shelling.

“The information about the damaging of the Shushi church has nothing to do with the military operations of the Azerbaijani Army,” the Ministry of Defence said in a statement. “The Azeri army does not target historic, cultural, and especially religious buildings and monuments.”

Many in Azerbaijan remember their peaceful co-existence with ethnic Armenian neighbours in the Soviet era.

To Azerbaijani observers, the video from the cathedral is part of a broader campaign to besmirch Baku and its efforts to return what is theirs according to the international law and the status quo that emerged after the 1991 Soviet collapse.

“We see an unprecedented information attack on Azerbaijan,” Emil Mustafayev, a political analyst based in the Azeri capital, told Al Jazeera.

“The Armenian side deliberately releases fakes – for example, about the participation of certain Syrian mercenaries on the Azeri side,” he said.

Numerous reports by Armenian and international media claim Ankara has hired and sent hundreds of pro-Turkish Syrian fighters to the front line. 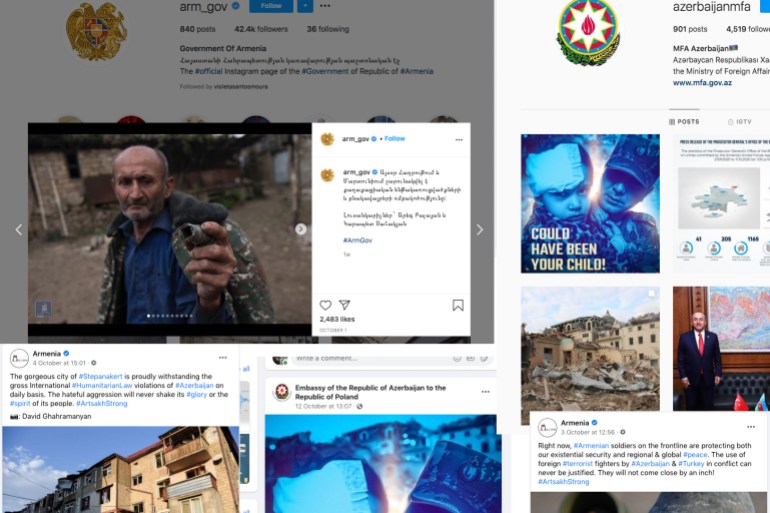 Unsurprisingly, the information war reverberates through the halls of power on both sides.

“I call on each of you to disclose the fakes of Armenian propaganda and to get the truth about the Armenian aggression to the international community on all platforms! Everyone who considers Azerbaijan their Motherland has to raise their voice and disprove the Armenian lies!” Mehriban Aliyeva, Azerbaijan’s first lady and vice president, wrote on Facebook on October 5.

Her husband agrees with her and has pointed to how the conflict is covered by Russian news outlets, especially after Moscow called for a truce and offered to host further rounds of peace talks.

Russia maintains a military base in resource-poor Armenia and supplies it with oil and gas.

Since the early 1990s, the conflict claimed more than 30,000 lives and displaced hundreds of thousands.

Many Azeri and Armenian refugees fled to Russia, mostly nestling in urban centres, which led to xenophobia and anti-migrant sentiment.

Despite the odds, many migrants succeeded in Russia and defend their motherlands in the social media war.

“I want you to understand that Azerbaijan stands for justice and is now returning its occupied territories,” Gasan Guseinov, an ethnic Azerbaijani video blogger who has 14.3 million subscribers, wrote on Instagram.

The Armenian side mirrors the claims.

“At times there are examples of blatant war-time propaganda, as is the case in all conflicts,” Richard Giragosian, a political analyst based in Yerevan, told Al Jazeera.

He says that Aliyev, who inherited his presidency and authoritarian policies from his father Heydar, does himself no favours by keeping a tight leash on domestic media and withholding information from the front lines.

Azerbaijan does not release its military death toll, for instance, but Aliyev has claimed he will announce details when the clashes subside.

“Ironically, such a secretive approach [triggered an] erosion of trust and a lack of reliability that tainted each and every official announcement of gains or claims of victory,” Giragosian said.

Even though many Azerbaijanis and Armenians will deny any semblance between their cultures and mindsets, to some outside observers the information war is rooted in much older traditions.

Azerbaijan, Armenia and neighbouring Georgia were part of Iranian, Arabic and Turkic empires before Russia absorbed the region in the 19th century.

“This is classic Greater Middle East, when the warring sides exaggerate their successes on the battlefield,” Pavel Luzin, a Russia-based analyst with the Jamestown Foundation, a Washington think-tank, told Al Jazeera.

“These are not even deliberate lies or disinformation, but part of centuries-old culture,” he said.