Iran is home to some of the world’s most ancient historical sites. Among them are 24 UNESCO World Heritage Sites, including the ancient ruins of  Persepolis, the grand mosque of Isfahan and the Golestan Palace in Tehran where Iran’s last shah was crowned in 1967.

When, in a tweet on Sunday, US President Donald Trump threatened to target 52 Iranian sites, including some of cultural significance, if Tehran retaliated over the assassination of top Iranian military commander Qassem Soleimani, it sparked an international outcry. Legal scholars, national security experts and politicians in the US and beyond, condemned the threat.

Shortly afterwards, the Pentagon distanced itself from it, with US defence secretary Mark Esper saying the military had no plans to bomb Iranian cultural sites.

On Tuesday, Trump appeared to retreat. Speaking to reporters in the Oval Office, he said: “You know what, if that’s what the law is, I like to obey the law. But think of it: They kill our people, they blow up our people and then we have to be very gentle with their cultural institutions. But I’m OK with it. It’s OK with me.”

The threat prompted global condemnation, with allied countries including Britain immediately distancing themselves from it. But why are cultural sites so significant and why did Trump inspire such outrage?

According to Mark Drumbl, Professor of International Law at Washington and Lee University, Trump’s threat to destroy cultural property is “hugely problematic”.

“This is forbidden under various branches of law and amounts to a war crime,” Drumbl explained.

Prohibitions against destroying cultural heritage have existed since the 1907 Hague Convention, which requires parties to an armed conflict to take “all necessary steps” for the protection of “buildings dedicated to religion, art, science or charitable purposes, historic monuments, hospitals and places where the sick and wounded are collected, provided they are not being used at the time for military purposes”.

Despite this, international courts have only recently started to prosecute this particular war crime. The first such conviction at the International Criminal Court (ICC) was in the case of Ahmad Al-Faqi Al-Mahdi. In 2016, the Malian member of al-Qaeda-linked group Ansar al-Dine was convicted of the war crime of attacking buildings of religious and historic importance in the Malian city of Timbuktu in 2012.

According to Eleni Polymenopoulou, an assistant professor of law at Hamad bin Khalifa University in Qatar, the reason for the “slow implementation of the law on cultural property is that colonial states … [long opposed] the idea of protecting cultural property”.

“Rather than protecting cultural property, colonial states have typically looted it,” she explained.

“The protection of heritage and even the illicit appropriation of cultural objects, such as the Parthenon marbles, is still today largely perceived by states as a matter of diplomacy rather than one that triggers international legal responsibility.”

But, Polymenopoulou added: “The destruction of cultural or religious heritage is an integral part of armed conflict, and in certain extreme conditions may even constitute cultural genocide.”

In addition to the 1907 Hague Convention, the 1977 Additional Protocol 1 to the 1949 Geneva Conventions prohibits “any acts of hostility directed against the historic monuments, works of art or places of worship which constitute the cultural or spiritual heritage of peoples”.

The 2016 US Department of Defense Law of War Manual, an internal directive providing the department’s view of the law of war, also contains extensive provisions on the protection of cultural property.

Although the US is not a party to the Rome Statute of the International Criminal Court, which makes intentional attacks on historical monuments a war crime, the US is a party to the 1954 Hague Convention on Cultural Property in the Event of Armed Conflict, which the Senate approved in September 2008.

Since under certain circumstances the Rome Statute allows the ICC to exercise jurisdiction over crimes committed by states that are not party to the ICC, acts of destruction of cultural property by the US could potentially be tried by the ICC.

Kristin Hausler, Dorset Senior Fellow at the British Institute of International and Comparative Law (BIICL), explained that the “protection of cultural heritage has … become an intrinsic part of the fight against terrorism” – something the US has itself pointed out.

“When explaining the US vote in favour of UNSC Resolution 2347 in March 2017, the first resolution dedicated to the protection of cultural heritage from destruction, the US mentioned the trafficking in antiquities by Abu Sayyaf, the now deceased high-ranking ISIL official,” Hausler said.

‘Push of a button’

For Wayne Jordash QC, a UK barrister and specialist in international criminal law, the protection of cultural heritage is tied to the survival of groups.

“For many, especially indigenous people, the links between land, culture and survival of the group are especially strong and in need of the same protection as crimes that have traditionally been the core concern of international criminal law,” he said.

The protection of cultural property is linked to the “common heritage of humankind”, a principle of international law that says cultural or natural elements of humanity’s common heritage should be protected from exploitation and held in trust for future generations.

Christine Anagnos, the director of the New York-based Association of Art Museum Directors (AAMD), an organisation of art directors from the US, Mexico and Canada, explained: “Cultural sites around the world form part of our shared human heritage and must be protected, even in times of conflict. All are precious, and any steps to harm them violate both a fundamental sense of human dignity and violates international law.”

For Drumbl, protecting cultural property is just as important as preserving human rights: “Cultural property is seen as part of the biodiversity of the human condition, what differentiates us from other species, and to destroy it is to wipe out part of ourselves.”

A country’s cultural, artistic, religious and historical spaces should, he argued, be “off limits from the threats of wanton destruction by the simple push of a drone button”. 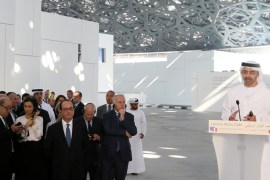 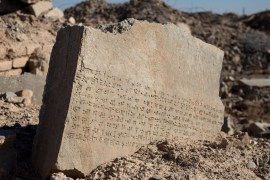 Nimrud is one of many archaeological treasures in Iraq which has suffered under ISIL control. 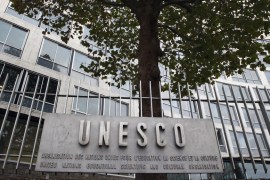 US and Israel formally quit UNESCO

Allies have quit UNESCO after announcement in 2017, arguing it fosters anti-Israel bias.