Doha, Qatar – Angeline arrived in Qatar in 2018 hoping to provide for her three children, two brothers and mother back in the Philippines.

This was her first overseas employment stint and she wanted to make enough money to be able to buy a house for her family.

Now, Angeline is struggling to survive and waiting for the end of her contract so she can go home.

“We’ve not been paid since April 1 as we’ve not been working since then [due to the coronavirus pandemic],” she told Al Jazeera, adding that her employers gave staff a one-time allowance of 200 Qatari riyals ($55) in April.

“They said it was a cash advance and will be deducted from the salary once we get paid.”

The cleaning company that Angeline works for has, like thousands of other businesses across Qatar, felt the brunt of government-enforced coronavirus restrictions.

In June, Qatar’s government told Al Jazeera it had introduced a 75-billion-riyal ($20.6bn) stimulus package to help companies continue operations and retain jobs, and to help those in “financial difficulty to pay salaries and rent”.

But Angeline says her employers have refused to support staff financially and have even confiscated passports and ATM cards – the latter action is illegal under Qatari law.

“In May, they told us they will give us 400 [riyals, or $110] if we sign a new contract. Those who refused were given another deductible cash advance of 200 [riyals]. We had no option but to agree. Otherwise, we would’ve starved to death.”

Under Qatar’s “kafala” (Arabic word for sponsorship) system, migrant workers must obtain their employers’ permission – a no-objection certificate (NOC) – before changing jobs, a law that rights activists say ties their presence in the country to their employers and could lead to abuse and exploitation.

The Government Communication Office (GCO) told Al Jazeera: “Qatar has made substantial progress on labour reforms and it continues to work with NGOs, including the International Labour Organization, to ensure that these reforms are far-reaching and effective.”

“Despite a handful of reforms in recent years, withheld and unpaid salaries, as well as other wage abuses, are persistent and widespread across at least 60 employers and companies in Qatar,” the report added.

HRW said most of the migrant workers it spoke to for the report experienced salary delays, non-payment of dues and end-of-service benefits. Some said “employers made arbitrary deductions from their salaries”.

In response, the GCO said: “Nearly all individuals who come to Qatar for employment never experience any form of wage abuse. There are a few, isolated, instances where workers experience this issue.”

In June, Al Jazeera published a report on how the coronavirus shutdown affected Qatar’s migrant workers. It spoke to hundreds of workers employed by private companies in the country and found that most were in a “no work, no pay” situation, struggling to survive despite the government’s stimulus package.

Al Jazeera spoke to numerous affected migrant workers, including driving instructors, salon staff, baristas, chefs, private taxi drivers, small business owners, and hotel and hospitality staff. Most of them have not received any assistance from their employers and are too afraid to complain.

“The [GCO’s] statement is not consistent with the findings that we have, but also with the almost periodic media reports we see of hundreds of migrant workers stranded after their employer stops paying them for months on end,” Hiba Zayadin, HRW’s Gulf researcher, told Al Jazeera.

Migrant workers make up 95% of #Qatar’s labor force, without them the country would come to a halt.

Ahead of the #Qatar2022 FIFA World Cup, too many workers face wage abuse, debt and hunger. https://t.co/JDJDVr4r2u pic.twitter.com/DV3ms1hNgi

“This is a pervasive issue, not just in Qatar but across the Gulf. It is important to stress that our report does not say nor intend to imply that all migrant workers in Qatar suffer wage abuses. Instead, it seeks to show that they work against a backdrop that both enables widespread wage abuse and fails to adequately protect them from it when it occurs.”

Al Jazeera has learned that despite a lot of coronavirus-enforced restrictions being lifted as part of Qatar’s four-phase plan to reopen the country and economy, a number of private sponsors are still not paying staff, despite making them work.

“I’m working six hours daily all week but getting paid just over seven riyals [$1.9] per hour,” staff from another cleaning company told Al Jazeera. “Because, until now, the company is still not operating fully, they said they are unable to pay us what the contract says.

“My last salary was paid in March. Since then, the company has not given us anything, not even a single riyal. We are only able to survive through private donations of rice and food items.”

Some workers said they have not been paid since January. Others are being paid a fraction of their salaries.

Workers have also told Al Jazeera some employers transfer salaries into the workers’ bank accounts but force the employees to hand over the ATM cards before withdrawing the amount.

“This response was not just inaccurate but really disrespectful and unmindful of what workers are going through. To deny this, especially in this period where job cuts and pay cuts are the norm, was ill-advised,” Vani Saraswathi, director of projects at Migrant-Rights.Org, told Al Jazeera.

“The GCO only had to peruse the complaints filed at various embassies and the MADLSA [labour ministry] to realise these are not isolated cases and is so widespread that it runs into tens of thousands. If they don’t recognise the problem, how are they going to resolve it?”

It added that the recommendations put forward in the HRW report “are already being implemented or on track to begin implementation”, including laws that remove the NOC requirement and the introduction of a minimum wage.

“Qatar’s labour programme protects all workers in all stages of their employment cycle,” the statement said.

But HRW’s Zayadin said while “Qatar has made many promises to migrant workers over the past several years and has introduced some reforms”, they were not going far enough.

“Time and again, migrant workers in Qatar have been disappointed to find that the marketed reforms have done little to improve their lived realities in the country,” she added.

“If Qatar truly wants these reforms to reverberate on the ground and to make a difference in the lives of those they aim to target, they need to abolish kafala in its entirety, allow workers to join trade unions, and introduce reforms that address harmful business practices.”

Workers are also losing faith in the system due to the barriers to accessing justice that exist in Qatar, Saraswathi said, echoing the fear among migrant workers of repercussions if they complain.

She added that for workers the announcement of reforms or a report means little.

Qatar’s government said it encourages workers to lodge their complaints with the labour ministry via a phone call, text or email.

In June, the GCO said: “Over 12,000 inspections have been carried out at workplaces and accommodation sites to confirm that companies are implementing all COVID-19 precautionary measures. There is no excuse for any company to violate Qatar’s labour laws, including late payment of salaries.”

For Angeline, who is scared to speak up, there is only one thing on her mind.

“My family is struggling to survive. They had to sell things in the house to buy food. Even here, it’s very difficult for me and my colleagues but we are very scared of the employer as we’ve heard stories about blacklisting and deportation in the past.

“The only thing on my mind is to leave.” 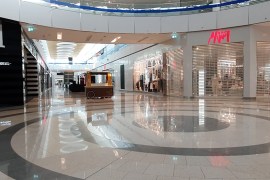 Despite the government’s stimulus package, migrant workers employed by private companies are struggling to survive.