San Salvador/Manila – On March 2, 2020, I left the Philippines for a two-week training and reporting trip through Mexico and El Salvador. At that time, there were six confirmed coronavirus cases. Selective travel bans, coughing etiquette and handwashing were the calibrated response.

Ten days later, the reporting trip was cancelled and countries around the world had begun closing their borders.

Our group of seven journalists and three organisers had to leave El Salvador and return to our respective countries immediately. For most, that meant going back to the United States. One had to go back to Istanbul. I had the longest journey – a little bit more than 48 hours to make a more than 24-hour flight to Manila before the city was placed under lockdown.

The soft vibrating buzz of WhatsApp nudges me awake. A concerned friend had heard Manila was about to be locked down. Her message was calm but emphatic. I needed to get out of San Salvador immediately. Certain areas of Manila would be closed off, but strict travel restrictions would be imposed and I risked not being able to enter the Philippines if I did not get home in time.

I was not surprised.

By then, Italy was a cautionary tale of how the virus and the disease it causes, known as COVID-19, could spread exponentially and bring one of the world’s better health systems to its knees. World leaders were eager to pull down the blinds, lock the doors and seal off borders to keep coronavirus out.

US President Donald Trump announced that he would ban travellers from 26 countries in Europe – initially exempting the United Kingdom – from entering the country. Americans scrambled to fly back home before the ban took effect.

Despite having no recorded coronavirus cases, El Salvador President Nayib Bukele declared an “alerta naranja” or orange alert, putting the entire nation of six million people under national quarantine. No foreigners would be allowed in and any Salvadorans entering the country would be required to undergo a 30-day quarantine period.

Salvadorans went into a panic. Our translator told me that at a supermarket in the upscale neighbourhood of Antiguo Cuscatlan, two people were fighting over the few pieces of chicken that were left. The price? $80.

My feed lights up with reactions to President Rodrigo Duterte’s announcement of a “community quarantine”. Air, land and sea access to the metropolis of Metro Manila would be cut off starting March 15. Seventeen districts and home to about 12 million people – including myself – would be affected.

It is still unclear to me if the travel ban will include Filipino nationals.

I am on my way to court for an interview when I get a panic-stricken message from my sister.

“Ate [big sister], Manila is closing. You won’t be able to come home.”

By this time, I had confirmed through others that the lockdown did not apply to Filipino nationals. Rather, the “community quarantine” as the government insisted it be called had so many exceptions that it seemed more like some kind of medically-imposed staycation.

I call my sister and assure her that I will try to get home as soon as possible.

I text Juanita, our programme manager, about the developments in Manila. She immediately calls me. The organiser and funder, the International Women’s Media Foundation (IWMF) had already begun discussing contingency plans the night before. They decide to cancel the reporting trip and send everyone home immediately.

The infection was spreading so fast, and heads of state were trying to make decisions just as fast. Pronouncements were made, but often quickly changed and revised, setting off a chain reaction.

I had more than 48 hours till the lockdown but it would take me more than 24 hours to fly back to Manila. A cancelled or delayed flight or a more restrictive lockdown implemented while I was in transit could leave me stranded. Plus, Manila was 14 hours ahead of San Salvador.

There is a short queue at the airport check-in counter. All airport personnel are wearing masks. Not everyone was wearing a mask when we first arrived in the country.

While waiting for our boarding call, a group of passengers are blocked by police. They chant “let us in” in Spanish. They quiet down and seem pacified, but we are called to board before I find out anything more.

In an article written by our fixer, local Salvadoran journalist Julia Gavarrete, I learn that El Salvador President Bukele’s Twitter declaration of a national quarantine surprised and confused many returning Salvadorans. More than 470 Salvadorans had been transferred from the airport to quarantine shelters in various parts of the city.

I land in Mexico and the airport is nearly empty.

I have a little more than two hours to claim my bag and check in with another airline for my transpacific flight.

Normally, such a transfer means going through various queues for check-in and security. It is often a mad rush of running across the different terminals to get to the international transfer gate. But there were no lines at baggage claim, check-in or security. At baggage claim, my luggage was already waiting for me.

I have time to sit down before getting on my 13.5-hour flight.

I board my plane for Japan. Like the airport, the plane is nearly empty. Each passenger gets their own row.

After takeoff, the flight attendant, wearing a mask and gloves, goes around to offer a tray filled with earplugs, eye masks, toiletries and other items to make the long haul flight more comfortable. I notice that face masks are also among the items on the tray. I try to remember the last time I boarded a flight where face masks were offered.

It is already March 14 in this part of the world. It is very early and Narita Airport is empty. Aviation data shows that an average of about 123,000 passengers pass through Narita Airport every day. But today, I can count the number of passengers roaming around on one hand.

Narita is the usual stopover when travelling from Asia to the US. I have never seen it this empty. At one of the few restaurants that are open, there is a group huddled together. Everyone else is sitting a comfortable distance from one other. Masks are momentarily taken off to eat.

I board my flight home. So far so good. In my section of the plane, there are a total of three passengers. I count more flight attendants than passengers. Like my previous flight, they are all wearing masks. They have plastic wrapped around their hands as makeshift gloves.

The woman behind me voices her disbelief. “We could bounce around the plane if we wanted to,” she said.

I begin to feel a tinge of sadness. The Philippines is one of the largest labour exporters in the world. On a long haul flight, my last connecting flight to Manila is almost always filled with Overseas Filipino Workers (OFWs) coming home from Europe or the Middle East.

The plane is usually filled with their lively chatter and giddy laughter. Everyone is excited to go back home after long periods of separation from their families, and March is peak season.

OFWs usually go home to attend the graduation ceremonies of their children. But classes have already been suspended and graduation events postponed to avoid large congregations of people.

I land in Manila and clear the immigration lines in minutes. The machines for the newly-instituted immigration e-lane are cordoned off. The immigration officer tells me the thumbprint scan could be a possible touchpoint for spreading the virus.

I take a photo of the closed-off e-lane and an airport official comes over to tell me photos are forbidden. He stands watch as I delete it from my phone.

I get my luggage and call a cab.

My cab driver is 40-year-old Mendel Okoy. I ask him how things have been in Manila and it occurs to me that in the last 20-something hours, he is the first person I have had an actual conversation with.

He says he usually drives in the early hours of the morning to avoid the daytime heat and the traffic.

He and other taxi drivers started feeling the effect of coronavirus when the government started implementing travel bans some weeks back, he says, and his usual passengers have begun thinning out.

The $20 he usually takes home is enough to support his small family – his wife and the elderly in-laws who live with them. But his daily earnings have dwindled to $12-$15 and he is anxious that the community quarantine could drag on for a month.

“We were hoping that domestic travel that usually picks up in the summer would make up for the loss. But now, domestic travel has completely been banned, too. I do not know what will happen,” Okoy told me.

Okoy is among the 15.6 million workers in the informal economy. The International Labour Organization (ILO) defines them as “independent, self-employed, small scale vendors of goods and services”.

As day wagers, they make just enough to get through the day – there is not enough to set aside a contingency fund. This makes them the most vulnerable when normal business operations are disrupted because of the shock of natural calamities, economic crisis and the global public health emergency of coronavirus.

When the month-long lockdown was announced, many trooped to the supermarket to stock up on food and supplies. That was not an option for day wagers like Okoy. “For us, there is no panic buying. Just panic,” he chuckled.

So far, the government has given no indication of assistance programmes for those likely to be hardest hit when the economy grinds to a halt.

“If it goes on like this for a whole month, we will not die from the virus, we will die from hunger,” Okoy said.

I made it home. But the relief I felt has given way to dread and uncertainty. Coronavirus is unlike anything we have ever seen and for many Filipinos – surviving another day is going to be even more difficult.

On the evening of Wednesday, March 18, El Salvador’s president announced its first case of coronavirus infection.

The International Women’s Media Foundation provided support for this reporting as part of the Adelante Latin American Reporting Initiative. 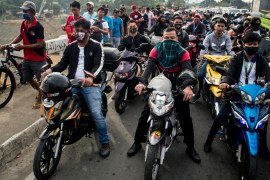 For daily wage earners, no work means no pay ‘so no choice’ and social distancing is impossible, critics say. 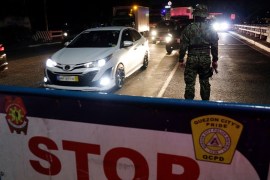 Amid quarantine, people in the Philippines are frustrated, worried that government has reacted too slowly to pandemic. 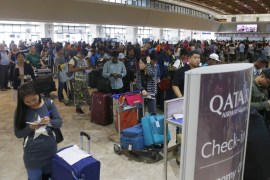 Travel bans implemented by their own government as well as foreign countries, put jobs and incomes at risk.