By Sebastian Castelier and Quentin Muller

Najaf, Iraq – For many Shia Muslims across the globe, Wadi-us-Salaam, or Valley of Peace, the world’s largest cemetery 150km south of Baghdad, is the most highly coveted final resting place, settled next to the Shrine of Imam Ali, the first of 12 Shia imams.

But for the gravediggers who work at the site, among the remains of five million Muslims – including those killed in Iraq’s successive wars, say the profession can be hazardous.

“One day, a shadow sneaked up behind me and hit my head violently, leaving me badly injured. I no longer walk straight and feel like the ghost still haunts my body,” former gravedigger Haider al-Hatemi, 26, told Al Jazeera, describing an odd creature locally nicknamed Tantal, Bzebza or Ghreria.

The family house was sold off to afford a $30,000-treatment, but more than two years later, Hatemi remains unwell.

The family lives in poverty in a slum-like area of Najaf city, unable to return to their normal life.

Hatemi’s wife, terrified by his behaviour, has filed for divorce. 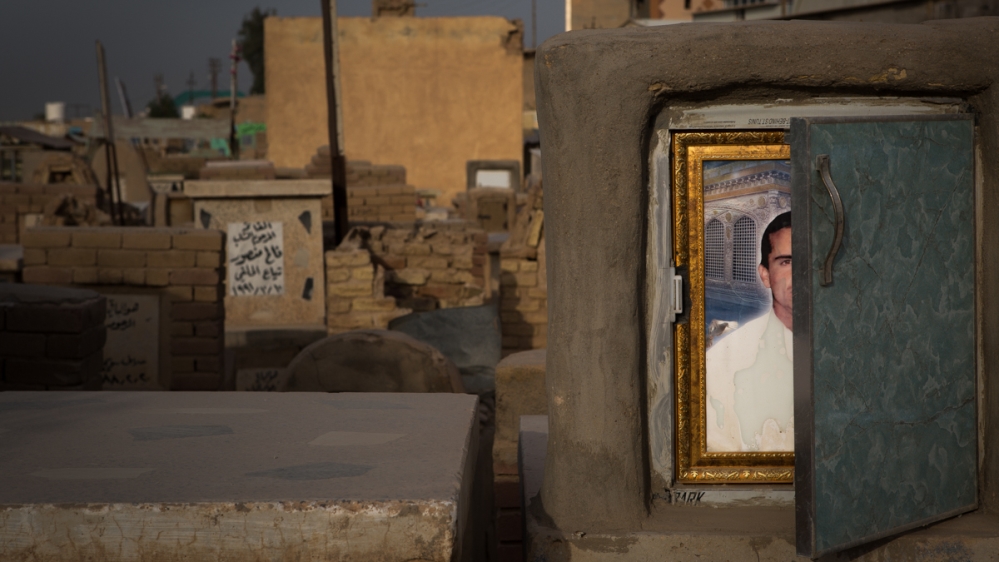 Wad-us-Salam covers about 13 percent of Najaf, a city considered as sacred by Shia Muslims – land equivalent to 900 rugby fields.

According to UNESCO, which has placed the cemetery on its Tentative List of World Heritage sites, the Valley of Peace is the only graveyard in the world where the burial process has been continuous for more than 1,400 years.

“Turnover is quite high. Our colleagues run away if the ghost gets involved in an incident,” said 23-year-old gravedigger Murtaza Jwad Abo Sebi, who claims to be the victim of an unusual attack that took place in 2013.

“It happened at night, while I was working down in the grave to put a dead woman in her tomb during the funeral ceremony. When I bent down, her hand slapped my face so fiercely that I was left petrified,” Abo Sebi said, wondering how a body well-tied up in a sheet could have hit him.

The medical community reports that slight post-mortem movements can occur in some circumstances, as a result of muscular relaxation followed by their stiffness during rigor mortis.

“I believe this lady was a witch,” Abo Sebi’s father chipped in.

For the next five years, Abo Sebi endlessly pictured the scene, sat alone in his bedroom while self-inflicting cigarette burns on his arms.

“I was going crazy, haunted by the traumatising experience,” he told Al Jazeera.

Following several suicide attempts, the decision was taken to enrol him in psychiatric therapy at the American University Hospital of Beirut, Lebanon, at a cost of $7,000.

After years of struggle, Abo Sebi is now cured and married.

Yet, caught up in the whirlwind of Iraq’s unemployment, the trained gravedigger was left with no option other than to return to Wadi-us-Salaam.

There, he earns up to $300 a month, in the footsteps of his father and ancestors.

“The job is passed on from generation to generation, and we have all heard about Tantal for decades,” he said.

A class of jinn that are referred to as ghuls dine on the flesh of the living and dead humans, so these jinns are often associated with cemeteries.

Hani Abu Ghnaim, 61, has been a gravedigger for more than 11 years.

A slim unshaven man who lives in the cemetery, Ghnaim believes the Valley of Peace is inhabited by two types of creatures: a living one and a ghost.

“I saw it at night, jumping from grave to grave to feed on freshly buried bodies. It successively resembles a big worm, a little child and a cat dressed in a large fur coat,” said Ghnaim, who carries a pick when walking across Wadi-us-Salaam at night. “If we come across it, I scream at it to go away.”

Assistant Professor of Religion at Trinity University in San Antonio, Texas, Sajida Jalalzai told Al Jazeera that it is “quite common” for Muslims – both Sunni and Shia – to believe in other-worldly beings apart from God: angels and jinn.

“A class of jinn that are referred to as ghuls dine on the flesh of the living and dead humans, so these jinns are often associated with cemeteries,” she said.

According to Ameer Al Juboury, 23, the manager of a gravediggers unit, this ghost “takes possession” of burial plots that were illegally resold in the black market by family members seeking easy money.

Over recent centuries, the spaces closest to the Shrine of Imam Ali Ibn Abi Talib have become scarce and prices have skyrocketed – a prime location can cost up to $4,000.

This is the reason illegally resale plots are haunted, Al Juboury believes.

Back at home in Najaf, Haider al-Hatemi explained that the expensive shamanic healing sessions have done nothing.

He still believes he is haunted.

With tears filling his eyes, he said: “I’ve lost everything.”