Kabul, Afghanistan – On Saturday evening, Mohammad Nader Walizad watched nine members of his family, including his brother-in-law, head to a wedding at the nearby Shahr-e-Dubai wedding hall.

He stayed at home with the rest of his family, thinking the others were busying themselves with revelry and dancing at the wedding.

But then, at 10:40pm (18:10 GMT), just as hundreds of guests were sitting down for dinner, a powerful explosion inside the wedding hall startled the entire neighbourhood.

“I knew it had to be an explosion,” the 52-year-old school official told Al Jazeera.

From then, the rest of the night turned into desperate dashes for him from one hospital to another.

At 2am (09:30 GMT), he received a phone call, informing him that his brother-in-law, Daoud, had died, while the other family members had received some forms of injuries.

Around the same time, 28-year-old Mansoor (he did not give his last name) was also on a frantic search for 12 of his relatives – aged between four and 32 – who were also invited to the wedding.

When he reached an Italian-run hospital more than six kilometres away, he found that seven of his relatives were killed in the bombing. The other five were wounded and were admitted in the hospital.

‘They were all poor, ordinary people’

Details were scarce as news of the bombing spread through Afghanistan, which was preparing to mark the 100th anniversary of independence from being a British protectorate on Monday.

It was not until early Sunday morning that it became clear that 63 people had lost their lives and more than 180 others were injured in the worst attack in the country this year.

By Sunday afternoon, the Islamic State of Iraq and the Levant (ISIL or ISIS) group released a statement, identifying the bomber as Abu Asim al-Pakistani.

Though Afghan wedding parties have been hit in the past, the attacks have mostly taken place in remote areas and usually attended by high-profile officials or strongmen targeted by rival forces or armed groups such as the Taliban or ISIL.

US forces have also been accused of targeting several wedding parties across the country during their aerial operations.

Residents said there was no such threat to the wedding on Saturday.

“They don’t need a reason. They just want to inflict the maximum amount of carnage. They want people to know they will remain unhappy, even at times of joy,” said Walizad.

Mohammad Zahir Ahmadi, whose family runs the Shahr-e-Dubai wedding hall, agreed. He said more than 1,000 guests were invited that evening, but only 850 showed up.

“They were all poor, ordinary people that night. Think about it, the groom was a tailor. Who could he have known that would make him a target?” asked Ahmadi.

Ahmadi said that when he saw the groom’s financial state, he worked out a deal and charged him only 40,000 Afghanis ($511) for the food, waiters, and other expenses incurred by the wedding hall.

Security officials are yet to provide any explanation as to why the wedding was targeted.

Mansoor said he was told by some survivors that the bomber arrived on a bicycle. He said he believed the target of the attack was not the wedding party.

Down that road are the Darulaman Palace, the hub of the August 19 Independence Day celebrations, and the parliament building, both high-value targets.

Ahmadi, whose family owns the wedding hall, said witnesses told him that the bomber walked in with the men returning from the “nikah” ceremony.

“No one recognised him. They said ‘who is he, search him’, but somehow he made it through,” he said.

After passing through the crowds, the bomber was believed to have entered the men’s hall, walked to the stage in the middle of the room towards the singers and detonated the bomb.

“There were places I never thought would be targeted. Two of them – mosques and schools –  have unfortunately come under attack. But a wedding? I still can’t believe that.”

Even the Taliban issued a statement condemning the massacre. “There is no justification for such deliberate and brutal killings and targeting of women and children,” it said.

But the government said it would not let the armed group wash its hands off the attack.

In a tweet on Monday, Afghan President Ashraf Ghani said: “Taliban cannot absolve themselves of blame, for they provide platform for terrorists.”

Amid peace talks between the Taliban and the US, the armed group continues to stage attacks, despite its pledge that it would try to reduce civilian casualties to zero.

They don't need a reason ... They want people to know they will remain unhappy, even at times of joy.

Shefajo said the attack has forced him and other wedding hall owners to beef up security at their facilities.

He said the guest list should be regulated at public weddings, so that the presence of military and government officials did not put the lives of thousands of others at risk.

The government has also tried to regulate the cost of weddings, which often run as high as $20,000 to $30,000. But enforcement has been an issue.

In 2015, Afghanistan’s parliament approved a law limiting the number of wedding guests to 500 and enforcing penalties on wedding hall owners for non-compliance.

However, residents and wedding hall managers say the law is not really followed by them.

Shefajo said Saturday’s attack would not put an end to opulent weddings, because such events were often the only times when Afghans could dance and sing in celebration.

“I remember in 2001 when the US B-52 bombers were bombing buildings, there would be a wedding party around the corner.” 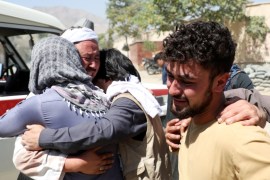 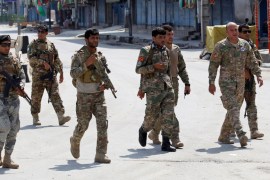 At least 66 wounded in as many as 10 explosions in Jalalabad as country marks 100th anniversary of its independence.