London, United Kingdom – Britain stands on the precipice of a new era in politics. The country’s next prime minister is set to be announced as its people and institutions brace for withdrawal from the European Union.

Brexit is the most fundamental shake-up of British trading, industrial and social life in decades. But the next prime minister, as with three of the past six UK prime ministers, will not be chosen in a general election, but through an internal party leadership contest.

The tussle to succeed Theresa May began long before her resignation as her power and influence were gradually sapped through her inflexibility in pursuing an EU withdrawal that accorded to her self-imposed “red lines”.

Ten MPs from her Conservative Party put their names forward and were whittled down to two finalists in an excruciatingly drawn-out series of ballots among its 313 legislators.

The eventual winner among final two contenders – Boris Johnson and Jeremy Hunt – will be decided by a postal ballot among the party’s estimated 160,000 members. 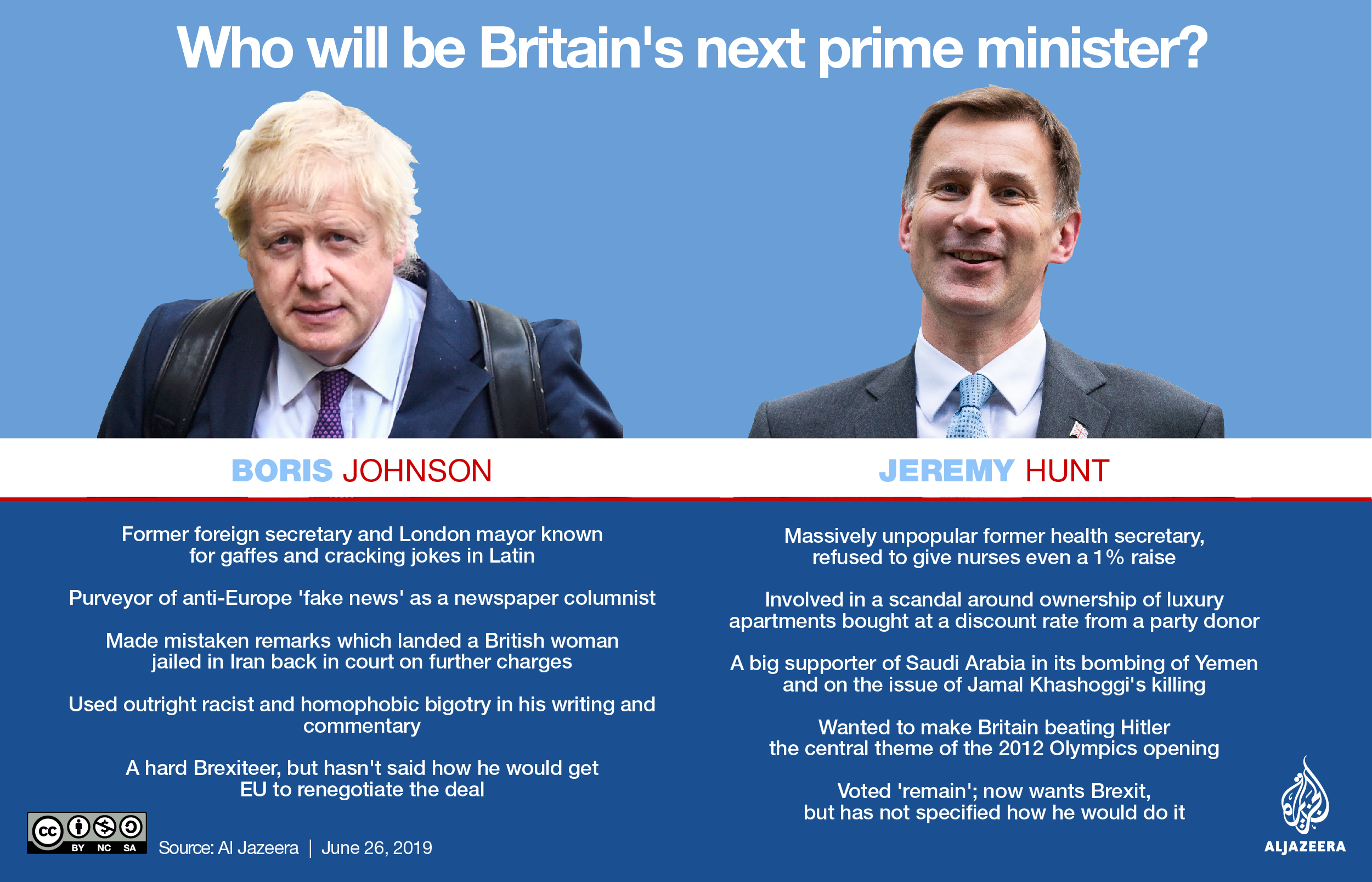 Who gets to choose the next prime minister?

Totalling around 0.24 percent of Britain’s 66 million people, it is fair to say Conservative Party members may not be the most representative of the British society.

“More than 80 percent are [aged] over 45 with a significant majority over 65,” Mark Shanahan, head of the politics department at Reading University, told Al Jazeera.

“This post-World War II generation – raised in an age where the country was more class-ridden, whiter, who travelled less and worked through an era of notional full employment is being asked to decide our future. And it’s likely they’ll vote for a populist ‘character’ who has been better than his opponent at telling them what they want to hear.”

“The Conservative Party is not representative of society,” he told Al Jazeera. “It tends to represent a more middle-aged – and older – white, middle class England. This is not to say the membership is exclusively like that. There are now active student Conservative Party societies at many UK universities, that include a much more diverse representation of society.”

What do they think?

Researchers such as Shanahan and Jones are probably the best resources to understand the British Conservatives, since it is notoriously difficult to profile its composition with absolute authority.

The party’s membership details are closely guarded. Each local party association keeps its own records, and there are speculations about the accuracy and frequency of their filings with central party headquarters.

In 2013, around 35-40 percent of the party’s members left due to the government’s passing of its same-sex marriage bill, the Bow Group think-tank reported.

And it’s not just LGBT people the Conservatives object to. In a poll commissioned for Channel 4, 56 percent of respondents said Islam was “generally a threat to the British way of life”.

The survey found that 42 percent of the British felt their society had been “damaged” by the inclusion of people from a wide variety of racial and cultural backgrounds.

The Conservative Party headquarters failed to respond to multiple requests, both by email and phone call, for a comment on the report.

However, the one thing unifies the party like no other – beyond alleged Islamophobia, homophobia and xenophobia – is a deep distrust of the European Union.

Another poll said a majority of the Conservatives would rather see the UK break up than remain a member of the 28-nation bloc.

The poll, undertaken by YouGov in June, found 63 percent of the 892 party members surveyed saying they would be prepared to see Brexit take place even if it meant Scotland leaving the UK.

Moreover, at least 46 percent of the respondents said climate change “had been exaggerated” and 58 percent said the death penalty should be reinstated.

‘A place for everyone’

“The Conservative Party has always considered itself as the party of the government,” said De Montford’s Jones.

“There tend to be close relationships between the Conservative Party MPs and peers and the senior civil service, the judiciary etcetera. This is very much linked to the ‘old boy’ network of public schools and universities – especially the more traditional universities,” he said.

Munish Chopra-Evans is a conservative activist in northeast London. He is also an LGBT rights campaigner and a green activist.

“There is a place for everyone in the Conservative Party,” he told Al Jazeera.

“Conservatives don’t care where someone has come from, but where they are headed. I always have been treated with great love and respect by everyone I have come into contact with through the party.”

Jones says the Conservative Party today is more representative of the British society than it has ever been. “That, though, is to damn with faint praise,” he said. “There is an awfully long way to go.”

Political scientist Scott Lucas, professor at the University of Birmingham, says it is not just the people being polled in this leadership contest that is a matter of concern, but the British electoral system as a whole.

Lucas said the FPTP system has led to an “ongoing narrowing” of British politics. “If you look at parties like the SNP or Plaid Cymru or the Greens – how much do their issues get talked about at the top levels when power is concentrated into this two-party system?”

Lucas said this “mismatch between people’s interests and the way politics operates” has been further compounded by Brexit.

“It’s so all-consuming that other issues – social policy, housing, the NHS – don’t get a look in. As long as we’re caught up in this Brexit nightmare, the more it’s going to suck all the oxygen out of politics.”

Meanwhile, Brexit looks set to dominate the British political narrative for some time, with the next prime minister set to find little time and fewer options.

“There is no better Brexit deal to be had,” said Reading’s Shanahan. “The reality of a ‘No Deal’ will be economic and social meltdown… [and] revoking Article 50 will blow the Conservative Party apart.”

Shanhan said whatever route the next prime minister chooses, he won’t have the numbers in parliament, making a general election possible sooner rather than later.

“It’s a risk, but one that may very quickly prove to be the only possible choice. It could be the making of our next prime minister or could force a very rapid exit.”