The best female footballers from 24 countries are set to take centre stage at the FIFA Women’s World Cup, which kicks off in France on Friday.

The semi-finals and final in Lyon next month are already sold out, while more than 720,000 tickets were purchased 50 days prior to the start of the tournament, according to FIFA, football’s world governing body.

But the build-up to the month-long event has raised concerns about the ongoing fight against unequal pay, gender discrimination and sexual abuse claims off the field.

More than 1.35 million were in attendance and millions more tuned in to TV for the last Women’s World Cup in Canada.

Four years on, interest in women’s football has grown with record crowds and greater media coverage, but disparities in the sport remain.

“There’s been such a lack of investment for all of these years and such a lack of care and attention that doubling, tripling or quadrupling investment, care, attention to the women’s game would be appropriate,” Megan Rapinoe, US women’s team forward and co-captain, said at a pretournament press conference in New York.

“Incremental changes are better than none at all, but for the resources and for the ability that FIFA has to implement that change, I think that they are not doing nearly enough,” she added.

FIFA has doubled the total prize money for this year’s World Cup to $30m, with the champions cashing in $4m compared with $2m that the United States received for winning the 2015 edition.

However, with a widening pay gap, the figures dwarf in comparison to the $38m France pocketed from a total prize pool of $400m at the men’s World Cup in Russia last year.

“The development of women’s football needs a kick-start – not a step back – after the women’s game was ignored or even banned by many leading football countries during the 20th century,” FIFPro, the worldwide representative organisation for professional footballers, told Al Jazeera in a statement.

In a first for South African football, its federation, SAFA, announced last month the women’s team competing in its maiden World Cup would receive the same bonus as their male counterparts at the 2019 Africa Cup of Nations in Egypt.

Sportswear brand Adidas will also reward all athletes on the winning World Cup team with the same performance bonus as their male peers.

Defending and three-time champions US are spearheading the fight for equal pay and treatment.

In March, all 28 members of the national squad filed a class-action lawsuit against the US Soccer Federation (USSF), accusing the governing body of “institutionalised gender discrimination”, including unequal pay, training, travel and playing conditions compared with their less successful male colleagues.

The USSF countered those claims saying the differences in pay resulted from separate collective bargaining agreements for the two teams and were not based on gender.

Piara Powar, executive director of anti-discriminatory body Fare network, said disparities at either the club or national level are “not justified”.

“For the women to compete equally, they should be paid equally,” he told Al Jazeera.

As the legal dispute goes on off the field with the players prepared to go to court next year, the USSF told Al Jazeera: “We will provide this team with everything it needs to compete” and lift a record fourth world title.

This year’s World Cup will also be played against the backdrop of a series of sexual abuse scandals and allegations in a number of countries.

Last month, Gabon’s authorities announced the opening of an inquiry into alleged ill-treatment and sexual assaults against members of the under-20 national women’s team by their managers.

The head of the Afghanistan Football Federation (AFF), Keramuddin Keram, and five other officials were suspended in December following allegations that some Afghan women’s national team players had been molested and physically abused by high-level federation officials.

An investigation ordered by President Ashraf Ghani is ongoing and FIFA is also examining the claims.

Since then, more cases – in Canada, Colombia, and Ecuador – have come up with male coaches accused of abusing female players.

Khalida Popal, programme director and former captain of the Afghan national women’s team, said she was “not surprised” to see the trend.

“Not much has been done to protect players in terms of safety,” she said. “The system is broken; it’s not made to support players.”

Shireen Ahmed, a Toronto-based sports writer and podcast cohost, said such incidents occur because there are not enough qualified women in positions of authority in football, which “still remains an old boys’ club”.

“If you know that there’s abuse happening and you don’t call it out and put procedures to prevent it, your players are not only going up against a lack of funding and support, they’re going up against survival,” she said.

The women’s final in Lyon on July 7 falls on the same day as the championship match for the Copa America in Rio de Janeiro and the CONCACAF Gold Cup in Chicago.

Questions have been raised over the timing of the Women’s World Cup, which coincides with three major men’s football competitions.

“The scheduling clash is an error by FIFA and its confederations, and an example of how women’s football is not a priority for them,” said FIFPro.

Powar said more needs to be done to uplift the women’s game.

FIFA did not respond to Al Jazeera’s request for comment. 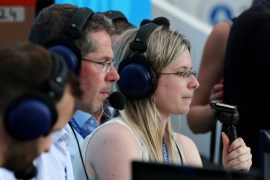 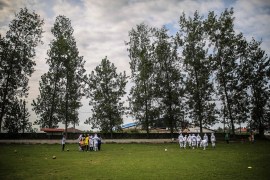 What’s it like to be a female football player in Iran?