By
Pilar Timpane and
Christine Delp

Two years since Juana Luz Tobar Ortega sought sanctuary in an attempt to avoid deportation from the United States, there is still no end in sight to her ordeal. In fact, the world outside has become even more dangerous for her and other migrants trapped in a similar situation.

Originally from Guatemala, the 47-year-old mother-of-four took sanctuary at St Barnabas Episcopal Church in Greensboro, North Carolina, in 2017. In the years since she has spent her time sewing pillows and other items as a way to raise funds and pass the monotonous days. She puts the number at possibly 1,000 pillows and several hundred bags.

“Before [seeking sanctuary], I had a secure job. I sewed and made a salary,” she says. “But now being in sanctuary it’s a complete change. I used to work 40 hours a week.”

Juana first migrated to the US after fleeing violence in Guatemala over 25 years ago. Although her formal asylum claim was denied, she says Immigration and Customs Enforcement (ICE) allowed her to stay in the US and work for many years, while they did routine check-ins. Then in May 2017, she was told she had to leave the country, and Juana and her family were forced to make an impossible decision.

Through the social justice organisation, American Friends Service Committee of North Carolina, Juana’s oldest daughter Lesvi Molina connected with St Barnabas and brought her mother there to learn about the possibility of sanctuary. They were immediately welcoming.

A few months earlier, Reverend Randall Keeney and the vestry of St Barnabas had decided that if someone needed sanctuary, they would fashion an apartment-type space in their fellowship building.

So Juana and her family decided that she would move into St Barnabas – some 80km from the home she and her husband Carlos have shared – to avoid being deported from a country she has known for more than 25 years.

Juana relocated her belongings to the small room in the cinderblock building that became both her refuge and at the same time, an isolating enclosure, as she is not allowed to work or travel.

When Juana entered the church in 2017, she was the first person to publicly take sanctuary in North Carolina in the contemporary movement (prior to this wave of sanctuary cases, a movement had begun in the 1980s in Tuscon, Arizona to shelter undocumented immigrants from deportation).

Others took sanctuary after her, each seeking to avoid deportation. But each sanctuary case is different, involving various legal outcomes.

Minerva Cisneros Garcia, who took sanctuary at a different church in Greensboro, was given a stay of deportation just 100 days after she entered and – in one of the most positive turns since the movement began – was recently granted residency by a federal judge. In Durham, a man named Samuel Oliver-Bruno was violently arrested and held at an ICE biometrics appointment almost one year after taking sanctuary. Jose Chicas, Rosa Ortez Cruz, and Eliseo Jimenez have all remained in sanctuary in North Carolina without any change to their statuses.

Around the US, and in European countries such as Germany and the Netherlands, sanctuary and church asylum have seen a resurgence, and sanctuary cases appear to be on the rise. The Church World Service estimates there are close to 50 people in sanctuary (including families with children) in the US today and hundreds of congregations committed to supporting sanctuary in various forms.

For Juana and her family, the two years that she has been in sanctuary have been painful and challenging. “The worst part,” she says, “is not being able to go to my house. When my family has to go home and when they leave, I stay here.”

Juana’s family and community have taken her situation very seriously. Many have written letters, knocked on Members of Congress’s doors, and engaged in social action campaigns publicly requesting that their local legislators (including Republican Congressman Mark Walker, Senator Thom Tillis, and Senator Richard Burr) take steps to help Juana get her freedom and return home. Group activism has been tried to support collective sanctuary bills and movements. These requests and actions have been continually ignored.

“Sanctuary already is family separation,” says Lesvi, Juana’s daughter, who has taken up a lot of the advocacy for her mom over the past years. In sanctuary, Juana is not able to go to major events in her family’s life. The immigration system has quite literally ripped her family apart.

“My husband is a citizen, my two children are citizens, my other two daughters have DACA [Deferred Action for Childhood Arrivals] and I am the only one left out. My daughter Jackie is going to graduate from college this year. I can’t go out and she wants me to be there that day. But I have to tell her I can’t go. She is sad because I can’t be there at her graduation.”

In the two years since Juana took sanctuary, North Carolina – perhaps the entire country – has become a less protected place people living and working without documentation in the US.

On a national level, the Trump administration has taken steps to close borders, ban religious and ethnic minorities from entering the country, reverse the decades-long Temporary Protected Status for some immigrants, and regularly threatens DACA.

In North Carolina, many “anti-sanctuary city” bills, like the recent HB 370, have been pushed, which would require sheriffs and law enforcement to work with ICE to arrest and deport immigrants. Recently in Juana’s family’s backyard, huge raids have led to the arrests of many undocumented people and were suspected by many activists to be “retaliatory” against “sanctuary” policies.

All of these are symbols of what has been shifting in immigration policy, however flimsy, towards rescinding prosecutorial discretion, a practice that had essentially limited non-criminal deportations. While ICE continues to respect the memo on sensitive locations that keeps law enforcement at bay from protected spaces like churches and other spaces of worship, this doesn’t change the threat outside the church walls, or provide pathways for citizenship for those in sanctuary.

For two years our film team has followed Juana’s progress, producing the short documentary Santuario, codirected by Christine Delp and Pilar Timpane, and bringing her story to audiences around the country. Juana and her family’s fight is ongoing.

“We’re not asking a lot. We’re asking for an opportunity, a work permit, or residency would be the best thing,” Juana says. “We’d be able to be at peace.” 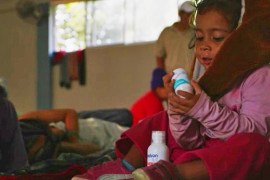 Walk in their Shoes

People & Power follows two migrant caravans as they head through Mexico to the US border.