El Ejido, Spain – “I’ve never really been into politics,” says 43-year-old construction worker Francisco Maldonado, as he lights a cigarette in his apartment in Santa Maria Del Aguila, a town on the outskirts of El Ejido, a working-class suburb in the Spanish province of Almeria.

A short stroll away, at the base of low rocky hills, a rolling expanse of plastic-roofed greenhouses dominates the landscape, glaring under the midday sun.

Covering 31,000 hectares and extending along the region’s 50-kilometre stretch of coastline, it is the single largest concentration of greenhouses in the world and one of Spain’s major economic hubs, exporting its crop of fruit and vegetables across Europe.

It is also where the Spanish far-right party Vox emerged from obscurity to claim 30 percent of the local vote in the December 2018 regional elections.

Vox trades heavily on anti-immigration and anti-feminist rhetoric, right-wing populism, and a desire to “Make Spain Great Again” through the dissolution of its autonomous communities and a hard line approach towards Catalan separatists.

It seeks to trade regional roots for seats in the Spanish parliament.

It has also pledged to repeal Spain’s 2007 Law of Historical Memory, which states that Franco-era symbols must be removed from public view.

Physically, he is muscular and has a blunt yet warm manner. Two bracelets on his wrists spell out the party’s name in capital letters. Another in lime green says “Espana Lo Primero” – Spain First.

“When I went to the first meeting of Vox, there wasn’t even space to park the car,” he says.”People of all different ages. Even old people who couldn’t really walk carrying the Spanish flag. Families like us. Even some people with the [Francoist] flag.

“I was about to sit down and someone said ‘wait, wait the anthem!’.”

Speakers then began to blast the Marcha Real to the standing crowd.

“It was really, really emotional for me,” he says. “Here, in this region, we feel that we have been forgotten by the government.

“People in the south are tired of having two parties: PP and PSOE. They want something different. They’re tired of the many cases of corruption … they don’t care about poor workers like us.”

Although Vox officials have not appeared in televised debates, the party dominates political discourse. Maldonado was a lifelong PP voter until 29 party members were indicted in a sprawling corruption scandal.

“When I listen to [Vox], I feel that I can trust them,” he says thumbing a bracelet.

El Ejido feels like a forgotten town at the country’s edge.

There are shabby factory buildings and half-empty streets dotted with Moroccan migrants and Spanish locals. Graffiti is daubed on low adobe-style housing.

On the concrete level of a dry river, someone has painted a black swastika. Further down the street, two concrete columns are sprayed with “Vota Vox”.

The Moroccans and Sub-Saharan Africans who work the greenhouses remain mostly out of sight.

In nearby Las Norias, on the corner of Sudan Street, a young Spanish man sits in his car, engine off and dozing in the sun.

“This is my neighbourhood,” he says listlessly. “Now, 90 percent of the people here are from Morocco.”

“This is a way to betray your country,” he says.

“The media says that this region was raised up by migrants. But that’s not true, because 30 years ago there weren’t migrants here. It was only us.”

Vox people say that migrants are criminals. Thieves. That we are the ones who rape their women. And we're getting up at 6am in the cold and going to work in the fields. No one in Spain wants to do this job. And in comes this guy - Abascal - and says that about us?

Almeria’s greenhouses export around 3.5 million tonnes of fruit and vegetables a year, generating an annual revenue of around $1.5bn.

But this “miracle model of agriculture” relies on an immigrant workforce of over 100,000.

Most live in slum-like settlements near neighbouring towns such as Nijar and the hills of El Ejido, working for minimal pay, without rights and often without documentation.

Vox began their initial campaign in El Ejido, yoking immigration paranoia and the political alienation of local residents to stir nationalist nostalgia in place of cohesive policy. Those at the sharp end of Vox’s rhetoric are Almeria’s migrants.

They also promote Spanish cultural phenomena like bullfighting and Flamenco.

Mamadou Keinde Diassaka, 40, entered Spain without documents after crossing the Mediterranean in 2000.

When he obtained his papers in 2005, he travelled around Andalucia, working job-to-job in the fields harvesting fruit, before heading to Almeria’s greenhouses in 2008 where he worked for four years.

“[Vox] people say that migrants are criminals. Thieves. That we are the ones who rape their women. And we’re getting up at 6am in the cold and going to work in the fields. No one in Spain wants to do this job. And in comes this guy – [Vox leader Santiago Abascal Conde] – and says that about us?

“That night I was thinking a lot. Either we speak up and we go to jail. Or everyone listens. Either way, we have to talk.

“Imagine yourself going into the fields in the morning. Covered in ice. I was wearing eight jumpers and five trousers … I couldn’t stand these people talking s*** about us. We’re doing something for us, yes. But we’re also doing something for the country.”

That morning at work Mamadou recorded a video on his Facebook page expressing his anger at Vox. He then went back to work.

“On our lunch break, my friends called me: ‘Hey your video has gone viral!’ I said ‘what is viral? Is there a problem?'”

Almost immediately, he was bombarded with friend requests and calls for TV interviews from Telecinco and other major Spanish channels. Even media from Uruguay and Colombia. Now, his original video has been played over 3.6 million times on Facebook. But he still refuses television interviews, stating that through social media he has complete control over his message.

“There are many activists now like me. They are adding me on Facebook, writing to me. They were afraid before – because there’s a lot of fascists in southern Spain … Many [Vox supporters] say that Podemos paid me money to record these videos. They also say I’m an actor from Cameroon.”

“Before the elections, they didn’t even have a typical structure of a political party,” says Ivan Gomez, 37, political correspondent for local newspaper Diario De Almeria who’s reported on the region for more than 15 years.

“They had 60 affiliates in 2015 and in one year they grew to more than 1000. This is the highest growth of any party in the region and in Spain.

“On Instagram, they’re the party who has most followers in Spain.”

To the left, PSOE’s attempt to resolve the issue of Catalan separatism through negotiations enraged voters in the South. To the right, PP’s corruption cases and Ciutadans simply represented the status quo.

Vox was something new, explains Diego Crespo of Podemos, who holds a parliamentary seat in Andalucia.

Vox’s reliance on social media, he says, is also key to controlling their exposure.

“Regarding economic policies, Vox is quite similar to PP and Ciutadans. They don’t want to talk about that because they don’t want people to notice.

A loosely arranged mural to the Spanish dictator Francisco Franco is pinned to the wall: one portrait in colour one in black and white which reads “F*** off, you could smoke with me.”

Next to them hangs a small Francoist flag, illegal under the current constitution.

A five-foot Francoist flag, a black eagle at its centre, hangs on a wall.

Two Moroccan teenagers enter the bar clumsily before the door manages to lock itself. They’re smiley and energetic with funky hairstyles and bright white trainers.

“What do you want?” says the barman.

“No, we are using it. It’s not free,” he replies, glancing over at the empty pool table sitting vacant in the dark.

The boys leave and the six men strike up an instant conversation.

“Be careful of these people. If you let them in they’ll destroy your business,” says one. “They’re like rats.

“One tried to enter my garden the other day. I reported it to the police but they didn’t do anything.”

“You have to be hard,” chips in another, gesturing to a small baseball bat hanging from a leather strap by the till. “I tell you, my kids’ school is f*****. You go into the classroom and 18 out of 20 kids are Moroccan. PP and the traditional parties aren’t going to solve this problem. Only Vox is going to solve it.” 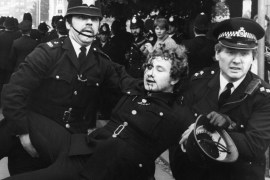 Balwinder Singh Rana, a 71-year-old anti-fascist, recalls the day he and thousands of others took on the National Front. 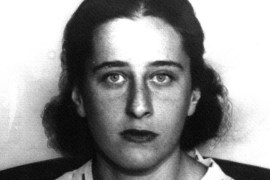 Olga Benario Prestes: The German who fought fascism, to the death

The daughter of the German communist killed by the Nazis discusses her legacy in the modern fight against the far right. 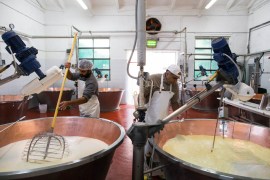 From Punjab to the Po river: How Indian farmers are adapting to life in Italy and turning their hand to making Parmesan.