Messina, Italy – Mory Jallow* can still hear the traffickers screaming insults at him as they pushed him and a group of fellow Gambian migrants onto a dinghy headed to Europe.

“It was a very cold night, and I was so paralysed [with fear] I couldn’t speak with the other boys on the boat with me,” Jallow said. “By early morning, the water began pouring on board, and I was sure I was going to die at sea.”

He remembers fainting, then a hand out of the blue helping him board another ship.

A voice told him in French that they were now headed to Sicily.

“A place I had never heard of. But I still couldn’t speak, so I said nothing.”

A year after his arrival, the now-18-year-old lives with around two dozen teenage African boys at the Basilica di Sant’Antonio community in Messina, southern Italy.

“The teachers help us get through every step and teach us a lot. But it’s been hard, because even though I’m not alone, I still miss my family every day,” he said.

According to Save the Children, 1,439 unaccompanied minors arrived in Italy in the first months of 2018.

At arrival ports, I've met many traumatised migrants who, despite the horrible shipwreck experience, still strongly associated the idea of sea with a sense of humanity, brotherhood and altruism.

The small city of Messina, on the north-eastern tip of Sicily, Italy’s southernmost region, has welcomed hundreds since 2015, the beginning of the Mediterranean refugee crisis.

Many are now guests of charitable Christian organisations, and local residents have extended their arms.

“In December 2016, we did an open day for the boys of the Sant’Antonio community, to show them the school and encourage them to apply once their Italian was good enough to let them follow classes,” said Giuseppe Pinci, a professional dive master and part-time swimming instructor at Caio Duilio.

But the refugee boys were shocked to see activities in the sea mentioned among the school’s main subjects.

This gave the headteacher an idea. He soon launched “Friendly Sea”, a course aimed at the teenage group teaching first aid, sea rescue, diving skills and the principles of maritime laws, as well as organising meetings with the Italian coastguard.

Pinci, the course leader, said he chose the sea rather than a swimming pool as a practise venue for its symbolic significance and psychological impact.

“On the first day, some didn’t feel like fully dipping in the water and only came to watch the sea,” he said. “Others were braver and took a swim, but didn’t immerse themselves below sea level.”

He divided participants into two groups: those whose only experience of the sea was a shipwreck and others who had to learn how to love it again. “We needed them to be at the same level to get to the following stage together, as a compact group.”

Since the programme began in the summer of 2017, 14 migrant children have become regular students at Duilio.

Jallow, part of the pilot diving class, is now in his final year at the nautical school.

But he was sceptical at first. The sea would only remind him of his own tragedy.

“Today, I feel less scared. My hope is to be able, one day, to help other migrants like me to no longer be afraid, and save them from drowning,” Jallow said.

Ester Russo, a psychologist specialised in migrant mental health with experience of offering refugees first-aid services at Sicilian ports, said people who survive the sea crossing are often left with a distressing feeling of guilt, after seeing women and children die without having been able to help them.

“I think group activities with those sharing the same traumatic experience can offer some sort of mental relief. The symbolic choice of using the sea is also particularly meaningful,” she said.

“At arrival ports, I’ve met many traumatised migrants who, despite the horrible shipwreck experience, still strongly associated the idea of sea with a sense of humanity, brotherhood and altruism.

“In the sea, there are also people saving people, so it’s possible to help survivors identify the sea water with feelings of hope and resilience, later in the healing process.”

I could taste my own tears, as salty as the sea water that later slapped us all in the face during the crossing.

In a flashback, 17-year-old Aissy Junior remembers the sound of mothers crying mixing with smugglers making aggressive and loud demands.

“I could taste my own tears, as salty as the sea water that later slapped us all in the face during the crossing,” he said.

It took Junior two months to walk to Libya from his native Cameroon, then another month waiting at the docks of Tripoli’s port before being pushed on board a dinghy.

He remembers suffering hunger and loneliness, despite being constantly surrounded by people.

“I come from a big family of six brothers, and I’ve never felt more lonely in my entire life,” he said.

He has been fostered by Massimo Sigillo, a PE teacher at Caio Duilio who he met through the Friendly Sea course.

“I like that Massimo and his wife Silvana don’t ask me questions about my Libyan nightmares, but patiently wait for me to open up whenever I feel [ready],” Junior said.

The swimming instructors didn’t make him feel different from Italian kids, and he was excited to learn how to float and not swallow sea water, like he did during the crossing.

“I’m still not as good as I want to be, but with practise, I’m getting there. I’m positive 2019 will be the year I’ll overcome my fears once and for all,” he said.

Sigillo, Junior’s legal guardian, said the boy was diagnosed at his arrival with depression.

“This had a big, negative impact on interpersonal relationships with his classmates. After a year of swimming classes, though, I notice a big difference. He trusts people more, but there’s still a lot to do. Doesn’t matter, we’ve got time,” Sigillo said with a hopeful smile.

It is a delicate time for refugees attempting to live alongside Italians, many of whom after the new government’s election last year have grown sceptical about welcoming migrants and rescuing them at sea.

But some local residents, after watching the news on TV, complained about the presence of “black foreigners”, using racist and derogatory language.

Shortly after, her project was not renewed.

The young migrants enrolled in the Messina programme want to keep the project going, even if that means paying out their own pockets.

“Since I live in Messina, the sea has become my ally. I learned to swim and I’m no longer scared. My goal is to become a lifeguard because I want to help other fellow black brothers escape from war and poverty, like me,” said 19-year-old Hubert, who ran away from the Ivory Coast where his family couldn’t afford to educate him.

He said he saw his friend and travel companion die at the hands of a smuggler, and since that episode, he has pledged to help others recovering from similar experiences.

As Pinci prepares the oxygen cylinders, overlooking the crystalline waters hitting Messina’s shores, he talks about new plans for the course, such as adding a sailing module and lifeguard certifications.

The sea can provide career opportunities, he says, and help the boys integrate within the poor local economy.

“Here the sea is man’s best friend,” he said. “We need to gently encourage that friendship.”

Names marked with an asterisk* in this piece have been changed to protect the interviewees’ anonymity. 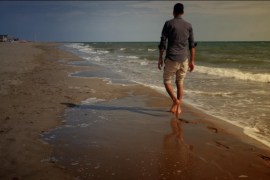 Three young North Africans survive the hazardous journey to Italy only to find their European dreams in tatters.