Song Jin-won was in middle school when the Korean War broke out in 1950.

As the North Korean army invaded the South, Song realised he had to hide until it was safe.

“When the South Korean army recaptured my area, I thought I should take revenge from the North Koreans,” Song told Al Jazeera. “So my colleagues and I decided to join the military as student soldiers. Afterwards, I joined the army as a military cadet and took part in the Sudo Hill battle where nearly half of my platoon was killed.”

As United States President Donald Trump and Kim Jong Un prepare to meet in Vietnam for high-stakes and complex nuclear negotiations, war veterans, including Song, hope the summit will also act as a big step towards officially ending the Korean War.

The two Koreas are technically still at war as the hostilities stopped in 1953 with a truce signed by the US, representing United Nations forces, and the militaries of North Korea and China. The armistice agreement – adhered to but not signed by South Korea, whose leaders at the time rejected the idea of a ceasefire that left the peninsula divided – fell short of a peace treaty that has governed the conflict ever since.

In April, Kim became the first North Korean leader to cross the border since the end of the fighting decades ago for talks with South Korean President Moon Jae-In.

In a joint statement after their landmark summit, the two leaders vowed to work with the US to end the “current unnatural state of armistice” as it was a “historical mission that must not be delayed any further”, as well as pursue “complete denuclearisation” of the peninsula.

Just months before the meeting in the border village of Panmunjom along the demilitarised zone, North Korea had conducted more than five nuclear tests, threatened to fire a missile towards the US Pacific territory of Guam and detonated what it said was a hydrogen bomb.

Amid the rising tensions, Trump meanwhile had used his first speech at the UN in September 2017 to threaten to “totally destroy” North Korea and mock Kim as a “rocket man”.

But in the months that followed, a number of diplomatic initiatives eased tensions and led to Kim and Trump holding an unprecedented summit in Singapore in June last year. The meeting produced a vaguely worded pledge on denuclearisation but progress has since stalled amid disagreements over the interpretation of the agreement, while an end-of-war declaration has remained a major sticking point.

Now, days before the second Kim-Trump meeting in Hanoi on February 27-28, hopes have again been raised that a permanent resolution will be found.

“Of course I want the war to end and peace to be established. And in the Singapore summit last year, dismantling of North Korea’s nuclear weapons was proposed as precursor to that,” Ro Moo-sik, vice chairman of The Korean War Veterans Association (KWVA) in Seoul, told Al Jazeera.

“But the problem is that North Korea is only saying this and nothing is actually being done. It still possesses various weapons and a large number of troops. They are ready for war,” added Ro, who also joined the army as a student.

Seoul and Pyongyang both claim sovereignty over the entire Korean Peninsula which was divided along the 38th parallel, a line drawn after World War II in 1945. A communist regime was set up by the Soviet army and its proxies in the north directly opposing the US-backed government in the south.

In June 1950, almost 100,000 North Korean forces, backed by the Soviet Union, invaded South Korea. UN forces, led by US Marines, came to Seoul’s aid, while China also joined the war on the side of the North Koreans.

The result was one of the 20th century’s most horrific conflicts, which killed millions of civilians and military personnel.

“The Korean Peninsula ended up being the battlefield of the ideological conflict,” Park Soon-young, a director at the KWVA, told Al Jazeera.

“If the Korean War was [just] a conflict between the two Koreas, the ceasefire wouldn’t have lasted this long [and we would’ve achieved peace],” said Park.

“But back then, the conflict between the ‘free world’ and the newly born communist world was intensifying,” he added.

“We are very unfortunate that we cannot solely make decisions of our own since a lot of stakeholders are involved in this.”

But according to Lee Seong-hyon, an expert on reunification at the Sejong Institute, a formal declaration ending the war in the Vietnam summit would be “a kind of peace treaty” that would be nothing more than a “symbolic” move.

“North Korea and the US are both making tactical moves without trusting each other fully,” he said.

“Declaring an end to the war can save Trump’s and Kim’s faces, and South Korea will welcome it. It is a carrot chewed by all.”

Narushige Michishita, a professor at the National Graduate Institute for Policy Studies in Tokyo, warned of the “considerable risks” of an official end-of-war declaration – first proposed by South Korea’s Moon as a political statement towards achieving permanent peace in the future – would carry.

“South Korean government ofﬁcials have emphasised that such a declaration would be more of a political matter with no legal implications, but there is no guarantee that North Korea and China would accept those terms,” said Michishita.

“Countries may propose declarations at the UN. In such an event, the Security Council resolutions adopted in 1950 would lose force. If that happens, the United Nations Command in South Korea would be disbanded, use of the UN ﬂag would end, and the Status of Forces Agreement between Japan and the UN forces would become void.”

Pyongyang has long made a peace treaty a top priority in its denuclearisation negotiations with Washington, which, for its part, insists North Korea must first take more concrete steps towards giving up its nuclear arsenal. The US is also wary of potential additional demands for a withdrawal of its troops from the South, according to analysts.

In October, Moon expressed optimism that the US and North Korea would soon declare an end to their state of war, in a move that would be seen as a confidence-building measure before the official peace-treaty negotiations.

“If North Korea takes certain measures, the end-of-war declaration would be a political statement that would announce that the long-standing hostile relations between Pyongyang and Washington had ended,” he said in an interview.

But Park said he hoped Pyongyang would also work towards establishing peace and a permanent end to the war – instead of just Seoul pushing the case forward.

“The current government [in Seoul] aims at maintenance of peace no matter what. It is trying its best to keep peace with North Korea, China and other countries. However, the problem is that North Korea never kept its promise in regard to diverse activities and decisions made for peace.”

“People are thinking we are approaching real peace but we are worried about possibility of the current South Korean administration being fooled again, as it always has been. We just hope that we are not deceived again. Trust is what is important.”

‘Not much time left’

Last August, dozens of elderly North and South Koreans met for the first time since their families were broken apart by the war nearly 70 years ago.

The reunion, the first in almost three years, took place at Mount Kumgang, a scenic resort in North Korea following thawing of relations between the two Koreas.

Since 1988, more than 132,000 people have registered with the Red Cross in South Korea for the reunion programme.

More than half of them have since died. Due to reunions being held irregularly and the random selection of family members only a lucky few actually get to meet their relatives one last time.

For those who were not so lucky, there is still hope that the two countries and other stakeholders will agree to end the war and normalise relations. And that this will result in them seeing their relatives again.

“I signed up for a reunion 30 years ago but have yet to be picked for one,” said 80-year-old Nam Gyu-hyeong.

“For me, there isn’t much time left. Five of the nine people I fled North Korea with are dead already.” 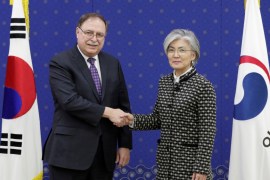 South Korea signs deal to pay more for US troops

New agreement, yet to be approved by the parliament, comes after President Trump demanded Seoul pays more. 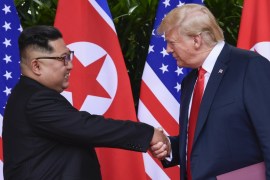