It has been a big year for Arabic fiction in translation.

Two Arabic books were longlisted for the 2019 Man Booker International, with the prize going to Omani writer Jokha al-Harthi’s brilliant Celestial Bodies in an inspired translation by Marilyn Booth.

Several other Arabic novels have been recognised by prizes and best-of lists, in a year that has seen more major reviews of translated Arabic literature than any other – save perhaps 1988, the year Egyptian author Naguib Mahfouz won the Nobel Prize for Literature.

Five highlights among many:

The towering Syrian playwright finally gets the wide-ranging collection he deserves in Sentence to Hope.

The book includes several of Wannous’s translated plays, essays and interviews that broaden our sense of the late writer’s relationship to his writing and his country, as well as his disappointments and depressions.

The collection includes celebrated early works such as An Evening’s Entertainment for the Fifth of June, as well as later pieces, including Rituals of Signs and Transformations – a powerful exploration of gender, identity, sexuality and power.

This collection of interviews with Palestine’s most celebrated poet is a must-read for poetry lovers and anyone interested in the intersection of writing and politics.

It includes five discussions – four translated from Arabic and one from Hebrew – all of which illuminate Darwish’s life and family relationships, as well as his relationship to poetry, fellow poets, critics, translators, and audiences.

It includes a wonderfully contentious and illuminating discussion with Israeli poet Helit Yeshurun, who had once, as the editor of Hadarim magazine, refused to publish Darwish’s work.

3. Jokes for the Gunmen – Mazen Maarouf, translated by Jonathan Wright

This surreal collection was the first winner of the Almultaqa Prize for the Arabic Short Story in 2016, and, in Jonathan Wright’s translation, was longlisted for the 2019 Man Booker International.

It is the first short-story collection by Maarouf, a Palestinian who grew up in Beirut, Lebanon, and now lives in Iceland.

The stories in Jokes for the Gunmen are set around civil war and family crisis, told in the jittery, manic and surreal style of someone trying to joke with a gunman while fearing for one’s life.

4. The Book of Disappearance – Ibtisam Azem, translated by Sinan Antoon

Azem’s Book of Disappearance is built around a tremendous vanishing act. One night, at the stroke of midnight, all the Palestinians in Israel and Occupied Palestine are suddenly gone, and Israelis are left behind to struggle to understand what has happened. The novel, set in Haifa, weaves together the stories of this imagined mass disappearance with the historic exodus of 1948.

If you can, read it side-by-side with Palestine + 100, edited by Basma Ghaliyini, a collection of twelve speculative works of fiction from twelve Palestinian writers, all set in 2048.

5. The Old Woman and the River – Ismail Fahd Ismail, translated by Sophia Vasalou

This charming story about a woman and her donkey during the early years of the Iran-Iraq war has not received much attention in English, but is a delight to read.

Shortlisted for the 2017 International Prize for Arabic Fiction, the story follows Um Qasem as she is evacuated from her Iraqi hometown along with her extended family but sneaks back in with her trusty donkey, Good Omen.

The Old Woman and the River manages to be uplifting without being cloying as it examines the better aspects of being human.

These five Arabic titles, reflecting a wider variety of inspired writing, are yet to appear in English, but have garnered much attention this year.

As novelist Hilal Chouman wrote: “Iman Mersal’s name on the cover is sufficient reason to buy a book the minute it’s released.”

This volume of Mersal’s prose is a follow-up to her acclaimed How to Mend: Motherhood and Its Ghosts.

This time, Mersal is pursuing the Egyptian author Enayat al-Zayat, who was stonewalled by the Egyptian critical apparatus and eventually took her own life.

Mersal first came onto the literary scene as a poet, and just as her poetry is full of storyteller’s humour, her prose works are enlivened by a poet’s sense of rhythm.

This wide-ranging historical novel centres around motherhood in 1970s and 1980s Sudan and ends when Omar al-Bashir seizes power in 1989.

It begins in what is now South Sudan, where the titular Edo barricades herself inside her home. She refuses to believe another of her infants has died and forces milk into the dead baby’s mouth.

Edo’s souls and stories pass into the one child who lives, Lucy, who must flee north during the civil conflict that engulfed their home.

The novel explores different types of motherhood, embroidered with Gaitano’s gift for observing the small moments in her characters’ lives.

Amr Ezzat writes a lucid, compelling narrative that is not only about the relationship between a son and his father, but also that between humans and power.

It illuminates what is safe and loving in family relationships along with the suffocating elements. Room 304 particularly shows how we are both extremely present – and extremely invisible – to our parents.

Some of Ezzat’s book is specific to growing up as a clever middle-class boy in Imbaba, an Egyptian village, but much of the writing can speak to universal difficulties in the parent-child relationship.

4. No One Prayed Over Their Graves – Khaled Khalifa

Khalifa’s 2019 novel, No One Prayed Over Their Graves, has been longlisted for the 2020 International Prize for Arabic Fiction.

It turns the clock back to Aleppo in 1907, when a flood sweeps in to take the lives of most of the two protagonists’ loved ones.

The story is told with Khalifa’s deep passion for his characters and their flaws, which are sometimes also their salvation.

Awni’s popular and acclaimed first novel has been shortlisted for a 2020 Sawiris prize.

It opens as the narrator, Rami, turns 30 and still does not know what he wants out of life. Prizes for Heroes approaches the events of January and February 2011 in Cairo through a far less heroic lens than previous narratives.

Rami, the sarcastic protagonist, is from the upper classes and his character echoes that of Ram in Egyptian writer Waguih Ghali’s cult classic, Beer in the Snooker Club. 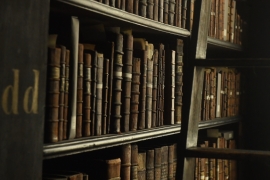 The Love of Books: The Brave Librarians of Sarajevo

In the midst of war, library staff in Sarajevo risked their lives to rescue over 10,000 precious books and manuscripts. 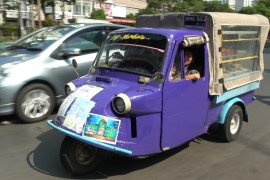 The mobile library bringing books to children in some of Jakarta’s poorest neighbourhoods. 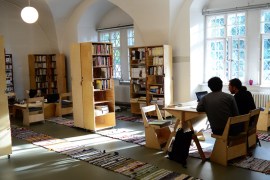 ‘We lost our homes and country, but we also lost our books’

Baynatna, an Arabic library in Berlin, is popular among the diaspora and refugees whose own stories could fill novels. 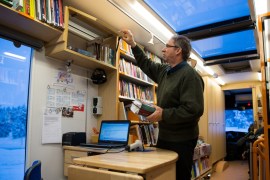 Reading North: Books in the Arctic

Oula has run a mobile library in the Nordic Arctic for 40 years, but as retirement looms the bus’ future is uncertain.