It was a cloudy August day in 2015 when I arrived in Zenit, a Ukrainian army position on the front line of the war between Ukrainian forces and pro-Russian separatists.

Unlike Pisky or Avdiivka, two other hotspots on the front line close to the Donetsk airport –  whose ruins after months of sustained battles were then under the control of the separatists – Zenit is not the name of a town. It is a military defence position that was once the location of Donetsk airport’s anti-aircraft systems.

A couple of dozen Ukrainian soldiers had been tasked with defending this strategically important post. For the next week, I would document their lives in a place that resembled a post-apocalyptic film set; where the few remaining buildings were riddled with mortar and bullet holes, the ground was pockmarked and the trees stood branchless.

On that first day, not long after I arrived, I went on foot patrol with a few of the soldiers. After passing through an abandoned building, its battered walls barely seeming to hold it upright, we ran, single file, across an open field. Discarded vehicles sat rusting among the mud and long grass: a burned-out tank here, the skeleton of a car there. The sun barely pierced the clouds but I felt hot as I ran in my bulletproof vest.

Then the sniper fire began.

The soundtrack to life on the front lines

We sprinted for cover, finding some behind a dilapidated army truck. The unit commander signalled for us to stay down.

It was my first experience of war, the first time I had heard shots ripping through the air around me. My heart pounded against my ribs. How many minutes passed like that – my back pressed against the rusting metal, my knees pressed into my torso – I could not tell for sure.

Then the commander signalled again: for us to run back in the direction we had come from. I ran at what felt like record-breaking speed, cursing my years of smoking as I did so. One hundred metres, two hundred metres, back to the “safety” offered by the riddled walls of the abandoned building.

As I tried to regain my breath, one of the soldiers spoke.

“Arm, phhh … leg, phhh,” he said, trying to explain the effects of a sniper bullet hitting your body.

Koha, the nom de guerre for Konstantin Bernatovich, was a 33-year-old father of twins from Kyiv. He had a punkish haircut and a warm, expressive face. A former TV cameraman and photographer, he had volunteered for the army five months earlier. He was now, among other things, my press officer.

“Head, phhh, big pampers,” he continued in his not so proficient English, his hands mimicking a head exploding.

It felt strangely natural to laugh there.

Later that evening, back at the main position, Alexandr, a 33-year-old soldier who goes by the nom de guerre “Grom” (Thunder), beckoned everyone inside.

“Good evening ladies and gentlemen, welcome to our concert,” said the shaven-headed unit sapper as blasts rattled the walls of the 50sq metre space that served as kitchen, living room and dining area.

Along with the staccato of mortar fire in the evening and the midday zip of sniper fire, laughter was the soundtrack to life on the front line.

But there were times when a more solemn mood descended upon Zenit.

Surrounded by rubble and mortar fire

In the evenings, the soldiers would sit on an old sofa to watch TV: sometimes it was the news, at others a movie or The X Factor. The wall behind the TV had been destroyed by a direct tank hit and rebuilt with bags of dirt and logs that propped up the ceiling. Beneath this room were the two underground levels where the soldiers slept.

Then, one evening, in a matter of seconds, there were no longer TV-watching soldiers on the sofa, but a badly wounded one. A direct mortar hit had destroyed his underground den, his ‘nora’ as the soldiers called it. The medics cleaned his head wound; the torn skin peeling away like crepe paper with each wipe. The nearest hospital was 30km away; the medics would have to drive through the dark without headlights on roads under constant attack to get him there.

The jokes suddenly flowed a little less freely – until a few days later, that was, when we found out that he had survived and was no longer in danger.

One day, en route to a forward post, I took this photo of Koha sitting in a ruined building. He was not feeling well (stomachaches do not care if you are fighting a war) and had his eyes closed. He did not know I was there, but he looked so peaceful in those few moments of rest surrounded by rubble and mortar fire. It was an image that stayed with me.

I kept in touch with Koha after the war and saw him in Kyiv the following year when I went back to work on a story about PTSD. We met for a beer at a self-service restaurant near Independence Square. As loud voices and laughter filled the place, we reminisced about Zenit. He was happy to be home and trying to adapt to life far from the front. It felt good to see him again and a relief to know that he was safe.

In 2017, the Romanian embassy in Kyiv held an exhibition featuring some of my photos. They invited Koha and gave him a print of the picture I had taken of him. They sent me a photo of him holding it. He looked happy. It made me cry. 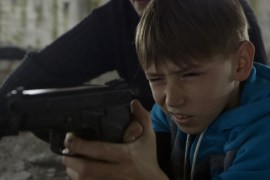 The Distant Barking of Dogs: Life in the Shadow of War in Ukraine

The life of a 10-year-old Ukrainian boy, Oleg, is turned upside down by the ongoing war in eastern Ukraine. 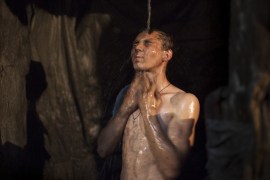 The young miners of Donbass

In this impoverished part of Ukraine, most men are destined to live their working lives under the ground. 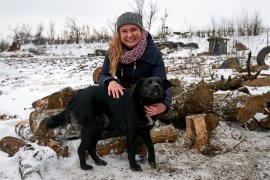 Ukraine: A female fixer on the front lines

In the first of a three-part series profiling journalism fixers, Al Jazeera talks to one covering conflict in Ukraine. 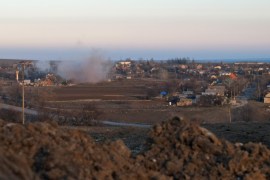