US President Donald Trump’s policies on Palestine have sharpened the existing divisions stemming from the world’s longest modern occupation. His controversial recognition of Jerusalem as Israel’s capital in 2017 and the relocation of the US embassy there was met with protests.

Jerusalem, which hosts sites holy to all three monotheistic faiths, is at the heart of the Palestinian-Israeli conflict. While Palestinians aspire to make it the capital of their future state, Israel says it wants total sovereignty over the city.

The film A Rock and A Hard Placewas born out of that historical development back in 2017. I wanted to explore why so many people worldwide are so attached to the city of Jerusalem. More importantly, I wanted to find out what the people who live there have to say about the challenges facing their city. What does it mean to live in and identify with the city of Jerusalem?

Jerusalemites who have been living there for decades told me ancient Jerusalem as people know it is disappearing.

Trump’s open bias towards Israel’s annexation of Jerusalem is seen as another step in a series of policies aimed at making the city Jewish in character, rather than maintaining the current diversity which has historically marked the place.

Initially, we set out to tell the story of Jerusalem’s historic railway station – once a thriving hub connecting the city to the rest of the country. One of the city’s few public buildings built during the Ottoman period, the station opened in 1892 as a terminal of the Jaffa-Jerusalem line. In 1998, the railway and the station closed.

The tracks are still there, and adjacent villages are filled with stories reflecting the changing city, then and now.

Over the years, the station turned into an entertainment centre with a leisure park, frequented by all generations from nearby areas – Arab and Israeli.

They use the same space but do not mix. They walk on the same track in the same city but each community has its own narrative. They have their own names for the place, the roads and surrounding buildings – just like in the rest of this divided city.

It turned out that a whole film on the full history of the railway station and its surroundings was not doable. The people who had lived alongside the tracks had been forced to leave the area during the 1948 expulsion of Palestinians by Jewish forces operating in the city. Their relatives could not be found. In some ways, the sociological history had been lost; the sense of loss of a long-gone era permeated.

The trail of the story ended here, in a literal dead end.

In Jerusalem, I met Omar Harami, a Christian Palestinian with two children who works for the Sabeel Ecumenical Liberation Theology Centre, a civil rights-based organisation working for a peaceful resolution to the occupation in Jerusalem. Harami’s passion, openness and frank opinions, as well as his deep commitment to peace in the city, caught our attention.

He took us on a rather epic journey around Jerusalem to meet Israelis, Palestinians of all faiths, the UN special envoy to Jerusalem, as well as the South African ambassador. He introduced us to religious and non-religious folks, young and old, including former Israeli soldiers.

One day, we filmed a conversation between Harami and Mustafa Sway, a professor of philosophy and Islamic studies at Al Quds University, at the Church of the Holy Sepulchre.

Sway had just come from Friday prayers in his traditional garments when Harami met him at one of the holiest churches for Christians worldwide. The tourists and pilgrims could not conceal their amazement and confusion when they spotted him. What was this man doing in a church?

What they didn’t know is that Sway is a son of Jerusalem, that the church and its vicinity is where he played as a child. Today, he comes here in solidarity with his Christian Palestinian brethren who have been excluded from their own church, as Harami puts it.

Sway is known as the voice of reason in Jerusalem. He showed Prince William around during his last visit to the Old City.

Sway believes that “we should really revive the whole notion of the one human family; regardless of how utopian that is. It is one humanity, one globe, one ecology and one area of responsibility. Those who have and those who have not”.

A remarkable statement from a man whose eldest son has lost his right to live in the city he was born in. In 1995, Israel began a policy of revoking the rights of Palestinian residents to live in their city. Over 14,500 have had their permanent residency status revoked in Jerusalem – among them Sway’s son, Mahmoud.

Harami and Sway discussed how Jesus was the first refugee in this holy city during the Roman occupation and agreed that Palestinians – whether Muslim or Christian – are becoming foreigners in a country frequented by millions of tourists and pilgrims every year.

Each ideology has a price, and the price that we are paying for the ideology of the great Israel is too much. People should not die for ideologies ... You should leave all this nationalist thinking. People are more important than land. And this is something that the Zionist movement didn't understand.

This place has not always been a battleground for religions, especially when it comes to the two major faith communities in the Middle East. Religion can bring people together. This is also something both Harami and Sway agree on.

“The ring of the church bells is similar to the Muslim call to prayer. It is a reminder that God is greater than whatever we’re doing at any given moment. The adhan says God is great and this is a message of hope we hold onto in the Middle East, regardless of how powerful empires are,” said Harami. “The Romans came and went. So did the British and French. And so will the Zionists. It is the weak who will inherit the earth because we believe in a stronger and just God; one that is more powerful than repression, a God that looks after the marginalised in the world.”

“It’s very important for all the powerful of the world to remember: Empires come and go, but the people remain on the earth. Israel is not going to think, one day I need to leave Jerusalem to end occupation; they will not have this conscious moment, this ethical moment. We have to force them to get out.”

Filming Mahdi was the most difficult part, he is a 15-year-old Palestinian boy living under house arrest, awaiting trial. He has been in and out of prison since he was 11 years old.

Mahdi’s father, Hatem Abu A’asab, is a Palestinian resident and shop owner in the Old City. Our local fixer had found and convinced him to speak to me after months of negotiation. The family was concerned this media appearance would be used against them by the authorities.

The son’s story, as per the family, is part of a wider story that the father describes as an attempt to pressure them to leave their disputed house which lies metres away from the Al-Aqsa Mosque compound in occupied East Jerusalem.

While we were there the family faced eviction from their house in the Old City. And just as we finished editing our film, the family was evicted. Father and son were arrested and later released. The family is now looking for a new home.

Filming a family as they are about to lose their home exposes how traumatised they are by the situation. Mahdi’s mother and sisters didn’t want to be in the film, so we were limited in the human elements we could film.

Meir: The former settler and soldier

Another fascinating character we met was Meir Margalit. His father is a Holocaust survivor who escaped to Argentina from Poland. Margalit immigrated to Israel in the 1970s with the right-wing Zionist youth group, Betar. He then served in the Israeli army and joined the religious settler movement in occupied Gaza.

He warmed up to us and it felt as if we had known each other forever. It is quite obvious that it hurts him to see what’s taken place around him.

Today, Margalit describes Betar as a “hardcore” movement and he’s almost embarrassed to be reminded of his right-wing past. Betar was a revisionist Zionist youth movement believed to have been founded in 1923 in Europe by Vladimir (Ze’ev) Jabotinsky.

It was one of many rising youth groups that emulated the special salutes and uniforms associated with Nazis and fascists at the time. Late Prime Ministers Yitzhak Shamir and Menachem Begin were both admirers of Jabotinsky. Former mayor of Jerusalem and Prime Minister Ehud Olmert were also members of Betar.

Later on, many members of this and other groups went on to join other similar right-wing groups or what eventually became the Israeli army. For instance, some of the members are said to have played a key role in setting up the Israeli navy. Nowadays, Betar can be found on university campuses in Israel and abroad, as well as in local communities.

It took Margalit about a year to start changing his right-wing views. He said he felt lonely with his new-found vision. What triggered this dramatic change was the humiliating way elderly Palestinians were treated, he recalls.

“I remember that I asked myself, what is the reason, for what is all this bloodshed? And then I understand that each ideology has a price, and the price that we are paying for the ideology of the great Israel is too much. People should not die for ideologies,” said Margalit.

“[Einstein] was a humanist and a pacifist. That’s the reason why he was against the Jewish state. He realised that we will have to live here, in bloodshed. You should leave all this nationalist thinking. People are more important than land. And this is something that the Zionist movement didn’t understand.”

The city of Jerusalem is perhaps one of the most photographed cities in the world, yet many of its people feel misunderstood.

The hardest thing for our crew was to capture the thoughts and feelings of our interviewees and not to repeat cliches and stereotypes often seen in media coverage of the conflict. 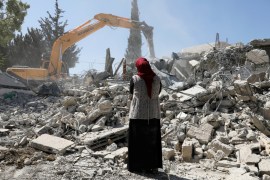 A look at the ongoing fight for the right to live in a city that is the beating heart of the holy land.