A fire at Shuri Castle on Japan‘s southern island of Okinawa, has nearly destroyed the UNESCO World Heritage site.

Firefighters were still battling the blaze a few hours after the fire started early on Thursday and nearby residents were evacuated to safer areas, Okinawa police spokesman Ryo Kochi said.

The fire in Naha, the prefectural capital of Okinawa, started from the castle’s main structure shortly before 2:40am on Thursday (1740 GMT Wednesday).

The Shuri castle is a key part of a complex dating back to the Ryukyu Kingdom, and is believed to have been in use from about the 1400s. Most of the current structures are reconstructions based on original plans and photos of the old castle.

“All the (three) main buildings have burned down, with nothing left behind,” Daisuke Furugen, an official with the local Naha fire department, told AFP news agency.

“Efforts to extinguish the fire are continuing, with 30 fire engines and some 100 firefighters involved.”

“We have no reports of injuries,” he added.

Footage on NHK television showed the castle engulfed in flames.

“I am extremely saddened by this. I am utterly in shock,” Naha Mayor Mikiko Shiroma told reporters.

“We have lost our symbol.”

“Naha city will make our greatest possible efforts to do everything in our power” to deal with the fire and its aftermath, she pledged earlier, during an emergency meeting on the fire.

The ancient castle is a symbol of Okinawa’s cultural heritage from the time of Ryukyu Kingdom that spanned about 450 years from 1429 until 1879 when the island was annexed by Japan.

The castle is also a symbol of Okinawa’s struggle and effort to recover from World War II.

The reconstructed main hall of the Shuri castle in particular is praised as “a great monument symbolising the pride of the Ryukyu people”.

The facility’s Shurei-mon Gate, with its striking red-tiled roof, was featured on a special banknote issued in 2000 when the G8 summit was hosted in Okinawa.

And the Olympic torch relay for next year’s Tokyo Summer Games was due to pass by the site as it travels around the country in 2020.

Japan is dotted with historic castle complexes, most of which are careful reconstructions of original buildings.

Several have suffered damage from natural disasters in recent decades, including Kumamoto Castle in southern Japan, which was badly affected by a series of devastating earthquakes.

Shuri Castle was bombed by US forces during the 1945 Battle of Okinawa, during which about 200,000 lives were lost on the island, many of them civilians.

The castle was largely restored in 1992 as a national park and was designated as a UNESCO World Heritage site in 2000.

Okinawa remained under US occupation until 1972, two decades after the rest of Japan regained full independence. 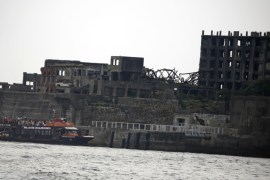 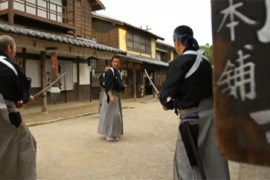 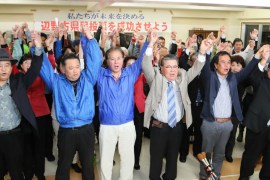 Japan’s Okinawa votes against controversial US base move

Some 434,000 people reject moving the base, but government in Tokyo says it will not derail relocation plan.