The Charleston church shooting triggered a nationwide debate over the country’s more than 1,500 monuments and publically-installed symbols memorialising the mid-19th century American Civil War. Soldiers astride horses, obelisks and entire mountains have been chiselled, carved and preserved for decades.

Since then, the New Orleans City Council and several other municipalities have voted that their Confederate memorials be removed. The debate accelerated in the wake of the violent protests in Charlottesville in August 2017 and continues today.

Christy Coleman is the CEO of the American Civil War Museum in Richmond. She was recently included in a list of 31 People Changing the South by Time magazine for her unique treatment of the civil war, not least of which is an all-inclusive narrative, allowing for a more holistic interpretation of the events.

In the following account, Coleman shares her views on the Confederate monument debate.

If you wonder why the United States has such a divergent view about the Civil War and Confederate monuments, it’s because it was crafted that way. We’ve spent 150 years lying to each other about what the war was about – and trying to reinforce the lie.

After the end of the war, there were a lot of widows, daughters, families [in the South] trying to make sense of this profound loss …  They’d spent years talking about the superiority of white people and now their whole world was upturned.

It’s like going through the stages of grief. The first stage of grief is denial and they … came up with this narrative that the war really wasn’t about slavery but about the rights of states.

The powerful organisation United Daughters of the Confederacy, aligned both, on a preservation front and an educational front. Their historian, Mildred Rutherford, made it her business to frame the narrative that must be in every school or textbook … And they persisted.

Therefore the lie that’s created during a period of grief, in a period of denial that all of this happened for the reason it happened, became so entrenched that we find ourselves in a space now where some people are finally moving into that bargaining stage: “They [the Confederate leaders] really weren’t that bad people, they were Americans too” or “They really weren’t about slavery”.

“There were black Confederates too” is my favourite. It is bargaining with history. History is what it is. So it’s a powerful lesson about narrative.

Robert E Lee and the waves of Confederacy

The vast majority of [Confederate] monuments went up between 1890 and 1910. They were placed when the white South had regained its power … It’s a memorial period – up to 25 years after the war ended – and as soldiers were dying off, they wanted to honour them.

On Monument Avenue in Richmond, Virginia, the statue of southern Confederate Army General Robert E Lee was the first monument that went up, in 1890. Nobody had seen anything like it, so thousands came from around the world for the unveiling of that monument. It’s amassing military units holding a reunion there. It was a huge event.

The reality is men, women and children were bought and sold from their families by Lee. He comes from a family that for generations has bought and sold human beings this way and their wealth and status was based on it.

In fact, the placement of the monument was the first co-opting of Lee’s memory. As much as they were revering him, they were also co-opting him.

Post-war, there was a need to rally the white South into “what’s next? Who do we turn to be a moral guide in this time of crisis?”.

And Lee was the man that they chose to do that, which speaks volumes to how he was revered. He was representative of an old, grand, long-line South and with that came a series of beliefs and systems that encapsulate him.

He defended our ‘sacred honour’. Post-war, that meant the defence of our homes, our way of life, which is that “whites are supreme”. Lee became the embodiment of that.

I’ve heard many different things about how Lee taught his slaves to read and write, how that was against the law but he did it anyway, and taught them bible study, and so on.

However, the reality is men, women and children were bought and sold from their families by Lee. He comes from a family that for generations has bought and sold human beings this way and their wealth and status was based on it.

Our exploration of history is always based on where we are in the present because that’s where our questions come from; casting contemporary morality onto the past.

We’re asking questions that were considered unheard of by Lee’s generation. You just accepted that this was the way it was. You’re part of a circle, part of an elite class, and there were certain expectations of you. Lee embraced these expectations.

But I am convinced that the weight of his choices, the death tolls and casualties being so high, weighed on his soul. I think that is why in his last years he was so adamant to tell others: “Don’t put up statues, don’t relive this … let’s just move forward into this new nation”.

After 1890, we saw a flurry of monuments that happened across the South.

A second wave happened in the early 1950s through to the mid-1960s. There are those that argue that the second wave was people “getting ready” for the centennial of the war … but it was also the beginning of the Civil Rights Movement.

There was a huge movement in the South in the early 1950s in opposition to the US Supreme Court decision to integrate black children into schools.

They said, “If we’re going to integrate them, they’re going to carry the names of our heroes”. So there were schools renamed after Confederate folks … and they started putting up statues.

The statue has a story to tell

The last monument actually went up in 2010 in Danville, Virginia. It was put up in advance of the Civil War sesquicentennial, the 150th anniversary.

What I find really interesting is that as we came out of the sesquicentennial, more people became aware and really willing to begin to have conversations about what the war was about, sort of breaking down the mythology that has kept the country on hold for so long.

I completely understand the position of people who would want to take monuments down, and many communities have made the choice to do that.

However, [Richmond’s] Robert E Lee statue sits in a neighbourhood, not in the courthouse or city square. Does that take away its power? Obviously not. I believe that the majority of people engaged in this discussion would say that statue has a story to tell and we have the chance to tell it right, so let’s try that first and see what happens.

Editor’s note: This article is based on an interview with Christy Coleman and has been edited for clarity and brevity. 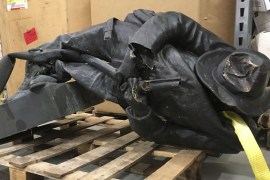 US Confederate monuments: What is the debate about?

We answer the most asked questions on Confederate statues and list those monuments that are being taken down.